This unbelievable story of an Army Unit kept secret for over 40 years before it was declassified.
Hint? It implied Ghosts…

Huh. I’ve wracked my brain and can’t think of anything. Looking forward to seeing this one, @Garnet! 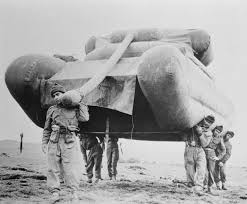 ‘The Ghost Army’
"In WWII U.S. Army used inflatable tanks to fool the Nazis and help win the war. Its one top-secret battalion fought not with bullets but with stagecraft, using inflatable life-size tanks, trucks, jeeps and heavy equipment, a ghost army with phony insignias, soundscapes and fake radio transmissions to deceive German soldiers on the battlefield.
Such as the pictured armored vehicle, to fool German forces.
This remarkable and special U.S. Army unit remained secret for over 40 years. In the mid 1990’s The WWII Ghost Army was declassified.

Hee! That was a good one! Hey, if it worked, why knock it, right?