Choosing a Deity or Do They Choose You?

I have been practicing Wicca off & on for over a decade but never felt called to work with a deity. I am finally feeling at a place in my life and practice where I would like to begin with working with one, or a few. Recently, I’ve been researching a handful of deities I would be interested in working with without actually casting anything. I know some folks work with many deities depending on the seasons, lunar phase, etc. However, I am particularly curious in folks’ opinion on working with a deity in their everyday practice.

So my question to all of you is, “did you choose a deity or did they choose you?”

Thank you for reading!

I had visions of my deities, they came to me. This mostly happened during meditations or drawing the same Goddess Oracle card several times, also during an OBE. If I keep seeing signs that point to a certain deity, I start doing more research.

In my reply to your introduction, I mentioned the courses. There are also a lot of meditations as well.

I have been practicing Wicca off & on for over a decade but never felt called to work with a deity.

That’s great I love the fact that in the craft that we can choose a diety! For me personally I feel Hecate chose me because she is a goddess that came to me in a dream, she’s a goddess of many faces! She is like a Witch Mother and she came to after my son was shot and after that my other son tried committing suicide she came to me during a time when I felt very dark inside. She is known as a dark goddess however I do not see her as a dark goddess anymore. Although she is a protective diety of children and she comes to you when you are at the crossroads of something in your life. She is a Goddess that watches over the dead and deals with spirits. She has a lot symbolism like her keys

of faith and believe that he can heal. I see her as a light goddess she has both light and dark. She has many epithets that I work with and one of my favorites is the Lampadios . She lites her torches and she has the sacred flames and has dominon over land sea and sky

She’s a lot alike like Artemis she is the Spirit of the wild but mature and calming. She came to me in dream

and danced with me and spun me around and she has a sense of freeness and she’s a lot like Diana and is from the ancient times in the babalonians. She is also connected to Persephone because she is the embodied woman who has suffered greatly and who has leaned into it. Persephone is an emotional warrior that has a battle for battlefield. She was being regulated to hell and then becoming a true Queen. Hecate has her daughter Madea and she is into the plant spirit she turned men into pigs to connect to plant medicine for trickery and she sought to keep women intact with medicine. she is very misunderstood and I felt very misunderstood and she is an original witch! Madea is like the witch within us. When we were stuck or isolated she reveals the pig because the pigs were really being pigs

Heckate is Helping me with my shawdow side and I’ve been working with her for sometime! Only during the dark moon we honor her for the Deipnon so the powers of the dark moon

is like the full Moon. You can offer her rituals, prayers and a nice dinner. The Greeks actually worshiped her. Honestly I have learned of many dieties and I love hearing stories because we apply there lives to ours and try to make sense of our lives and find our truth! I hope you will look into Hecate is a practitioner of witchcraft to embody the witch and what the witch means to you and create that secret space within you create an altar that has

If you have any questions that relate to Heckate I can answer them for you the best I can! 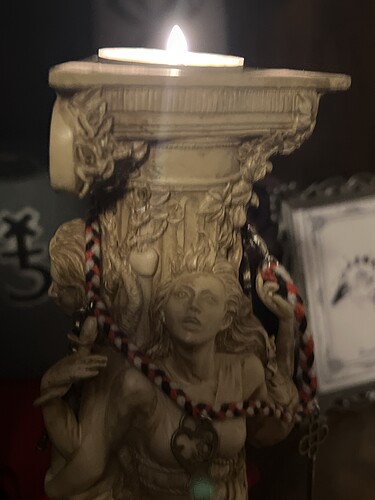 I’ve usually felt a strong pull toward a deity. It’s not always a WOW sign or anything. I know some people choose deities based on days of the week etc but I personally prefer to build a relationship with the deities I’m drawn to.

Edit: don’t force it, you can work with ‘all that is’ or a generic god / goddess until you feel that connection.

In my experience the diety chooses u.

This is a really great question and one that many people will have many different answers for. Some people believe that a deity chooses you while others believe that, through your own life experience and research, you choose a deity. Both beliefs are valid!

For me personally, I chose to work with Brigid. There are a few other deities that I’m interested in and have honored in passing, but Brigid is a deity that I honor on a regular basis. I have gone back and forth on whether or not she chose me or I chose her. Sometimes I feel like there was a presence around me when I decided to learn about Brigid. Sometimes I’m not sure. It’s been many years at this point so I couldn’t tell you anymore what it felt like

I get a pull and small sign’s that ultimately led me to realize who I was work with. In my case, Selene the moon goddess.

I think it goes depending on the person. You can choose or it will just come to you.

I would advise you to remain open, but guarded or protected.
If a presence or diety wants to work with you they will do so, usually from a distance if not personally invited. But that shouldn’t prevent you from worshipping any presence, element or deity you choose.
I would say that it’s similar to worshippers in orthodox monotheistic religions. Their god decides whether it will work through them whether the individual wants it or not. Alternatively, those adherents can spend their entire lives blissfully worshipping their god without any direct interactions and have a satisfying and fulfilling life.