Do you remember the whitewall tire?

A New article for young people
Does anybody remember the white wall tire? 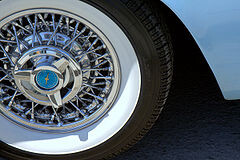 Coker Classic radial whitewall tires on a 1957 Ford Thunderbird
Whitewall tires or white sidewall (WSW) tires are tires having a stripe or entire sidewall of white rubber. These tires were most commonly used from the early 1900s to around the mid 1980s.
The use of whitewall rubber for tire has been traced to a small tire company in Chicago called Vogue Tyre and Rubber Co that made them for their horse and chauffeur drawn carriages in 1914.
Early automobile tires were made of pure natural rubber with various chemicals mixed into the tread compounds to make them wear better. The best of these was zinc oxide, a pure white substance that increased traction and also made the entire tire white. However, the white rubber did not offer sufficient endurance, so carbon black was added to the rubber to greatly increase tread life. Using carbon black only in the tread produced tires with inner and outer sidewalls of white rubber. Later, entirely black tires became available, the still extant white sidewalls being covered with a somewhat thin, black colored layer of rubber. Should a black sidewall tire have been severely scuffed against a curb, the underlying white rubber would be revealed; it is in a similar manner that raised white letter (RWL) tires are made. During the late-1920s gleaming whitewalls contrasted against darker surroundings were considered a stylish, but high-maintenance feature. The popularity of whitewalls as an option increased during the 1930s. On April 6, 1934, Ford introduced whitewall tires as an $11.25 option on all its new cars. But automobile designs incorporating streamlining directed visual interest away from tire walls. The availability of whitewall tires was limited in the U.S. during the supply shortages of raw materials during World War II and the Korean War.
Wide whitewall tires reached their height in popularity by the early-1950s. The 1957 production version of the Cadillac Eldorado Brougham was fitted with whitewalls that were reduced to a 1" wide stripe floating on the tire sidewall with a black area between this stripe and the wheel rim. The whitewall stripe width began to diminish as an attempt to reduce the perceived height of the wheel/tire. During the decade, increasingly lower vehicle heights were in vogue. During the 1950s, Fender skirts also covered up white wall tires.
Wide whitewalls generally fell out of favor in the U.S. by the 1962 model year. They continued as an option on the Lincoln Continental for some time thereafter but most common were narrower 3/4"-1" stripe whitewalls. During the mid-1960s variations on the striped whitewall began to appear; a red/white stripe combination was offered on Thunderbirds and other high-end Fords, and triple white stripe variations were offered on Cadillacs, Lincolns, and Imperials. Whitewall tires were a popular option on new cars during the 1950s and 1960s, as well as in the replacement market. In some cases, having whitewall tires were a “must have” to get the right look on a car; and for those who could not afford the real deal, add-ons could be installed over the rim of the wheel that could leak if the pressure was too high.
New tires were wrapped in paper for shipping, to keep the white stripe clean, and for preventing the black of other tires from rubbing on the whitewall side. Maintaining a clean sidewall was an issue. Some motorists added aftermarket “curb feelers” that were attached at the bottom of the wheel opening lip to help reduce scraping the whitewall tire against curbs. (I remember scrubbing my whitewalls on my knees, with a little brush)
By 1968, wide whitewall tires were no longer available on the Chevrolet Corvette; replaced by F70x15 bias-ply nylon cord tires with thin stripes, either a narrow white or narrow red stripe.
The single-sided whitewall remained a desirable option through the 1970s, becoming a hallmark of “traditional luxury”. Radial tires made by Vogue Tyre featured a narrow whitewall with a thin gold stripe line toward the edge of the tire. They were most often fitted to luxury cars.
From Wikipedia, the free encyclopedia
This was just an FYI, I had forgotten about these tires.

Whitewall tires or white sidewall (WSW) tires are tires having a stripe or entire sidewall of white rubber. These tires were most commonly used from the early 1900s to around the mid 1980s. The use of whitewall rubber for tire has been traced to a small tire company in Chicago called Vogue Tyre and Rubber Co that made them for their horse and chauffeur drawn carriages in 1914. Early automobile tires were made of pure natural rubber with various chemicals mixed into the tread compounds to mak...

I do remember then from car shows and my daddy’s truck. And his older cars that he had in the past.

I think there’s a line about whitewall tires in the Billy Joel song It’s Still Rock and Roll to Me. LOL!

I still have white walls on my motorcycle 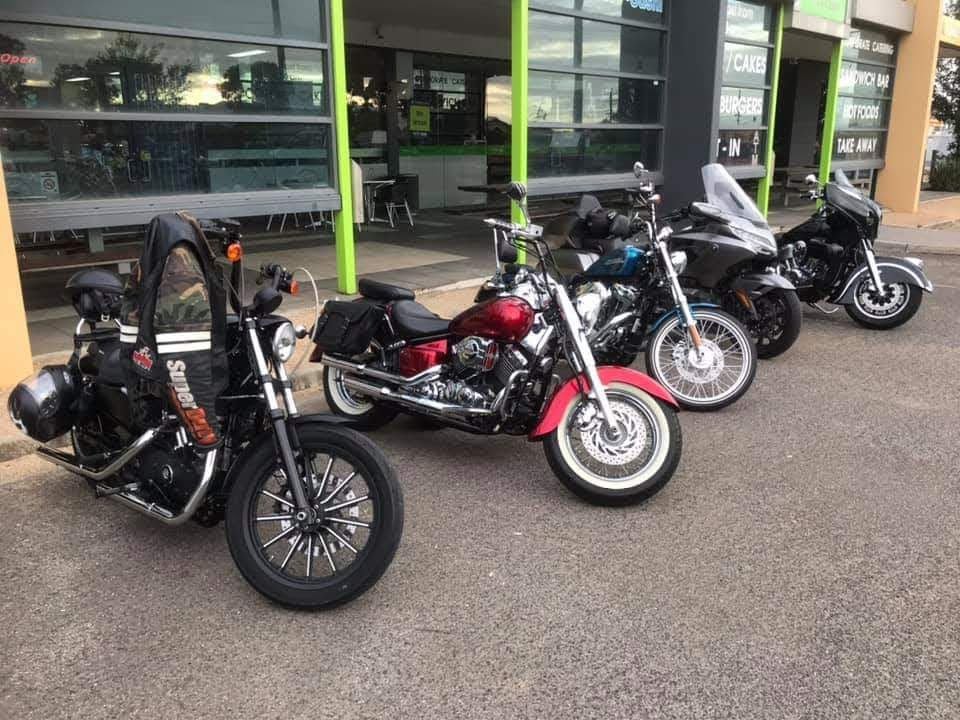