This article is frightening and it addresses book burning.
It is not my intent to deny free speech except when it interferes with our right to freely practice our craft without fear of reprisal.

Feb./ 2 /22 “We will be in our continued series on Deliverance from Demons. We have stuff coming in from all over that we will be burning. We’re not playing games. Witchcraft and accursed things must go,” wrote Tennessee Minister Gregg Locke.
(DELIVERANCE FROM DEMONS....Part 3) on Facebook, followed last month’s decision by a Tennessee school district to ban the Holocaust-based graphic novel Maus.
I find this act frightening. Harry Potter is a book about imagination. Since when are we squelching our kids imagination?
Book burning and brainwashing smacks too much of pre-WW2 Nazism for me.
Take care in the Bible Belt, you may not be as safe as we prayed for.

The satanic panic is in the corner, again. There’s 3 Satanic Temple’s chapters in Missouri, and 1 in Atlanta. The question here is, will they react of this in the matter? The chapters might be into something, knowing the online tabloids.

I wish some people would actually listen to their prophets for a change. Love your neighbor as yourself. Didn’t say anything about being arsonists. Gads.

Very upsetting article. Unfortunately, I think there’s always going to be that one of sect of Christianity that stirs satanic panic. Since the pandemic, I’ve noticed that more people in my town have gotten more religious (wearing crosses and crucifixes and advertising/recruiting for their churches). Thankfully, none of them have gone so far as book burning or calling people out on being witches.

Many book shops are adding a “banned books” section. I think some were already doing it before: 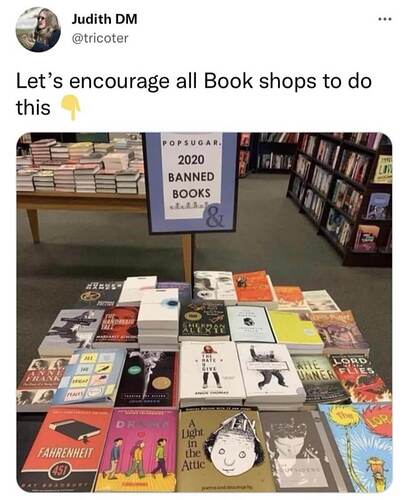 What’s incredibly ironic is if anyone has tried to burn the book Fahrenheit 451, a book about the burning of books.

If ever there was a red flag for insecurity and a grasp for complete control- book burning would be that red flag. Things have gone far astray if a group has taken to burning books

On another note, I’ve heard about the “Banned Books” sections that Francisco shared- what a fun idea for a store to have! It must be fascinating seeing which books went on the no-no list. Is that The Lorax down in the corner? Wow

So this is how we lose our imagination in childhood?

I was at B&N the other day and while I was checking out, I commented to the cashier on how times have changed! I was referring to the plethora of Tarot decks they have behind all the check-outs.
The Religion/Spirituality section has also found its way front and center of their store here in Anchorage, Alaska. Which all of those things I am proud of.

I watch a lot of Anime and I have to say, nothing is really off-limits when it comes to their storylines. Government, Race, Sex, Equality, Religion, Spirituality, alternative topics(anything really), etc… I could go on. I just finished a series that had to do with good/evil and who is to say what is right and just in the world.

I firmly believe that there are people in power who wish that we didn’t have our free will and take various measures constantly to make that a reality. Book burning could be the start of many things to come.

I’m not into politics and I’m sorry if this ignites something crazy which I hope it doesn’t. This is the first time I have said this out loud, in a sense, and it’s because I trust our community here.

@Garnet, yup, this is such a travesty! I don’t live far from there, and the whole thing makes me ill. I can’t even read this article right now because the entire situation triggers me. Ugh!!

I love this banned books display!

I saw something on YouTube about a school that removed “To Kill a Mockingbird” from its curriculum because the subject matter was uncomfortable. Yes that would be the point, it’s supposed to be uncomfortable and to make you think.

I swear progress has not been made at all in some places.

I live in a small conservative northeastern Missouri town, last school year my daughters English class read the book “The Hate you Give” we had to sign permission slips to allow the book to be read, the kids then read Huck Finn, which says derogatory words I believe over 144 times, we didn’t need to sign anything for that book. Its amazing to me what people will get riled up about. Its sad to me also, such close minded people.

I just got a popup on my Scribd account with the caption “Read Banned Books!” and it made me so happy! It’s funny, the subject was getting me down yesterday, but that popup made me think about the beauty and strength of the human spirit. People can ban things all day long (although I think it’s unconscionable), but you really can’t keep people from reading it if that’s what they want to do. They probably unwittingly encouraged a group of kids who wouldn’t have been interested otherwise to read!

@BrightBear you are so correct, I have always thrived on doing what others told me not too. LOL

some of those books were my favorite as a kid .