I believe I'm being called by Hecate

So I’ve mentioned before that I work closely with Frigga, but guys and gals ever since we moved to Nebraska a month ago (just one month) I came across a snake… In a crossroads ironically, every single day when I take my dog out (sometimes twice a day) for the last week I have found feathers in all different sizes and colors (brown and white, grey and white, black) and I’ve found more feathers than that because I’ve been finding them since I got here but this past week they’ve increased and are always right around my apartment building… And then today I go for our usual walk around the building and while, again, looking around for new herbs to harvest I find this big boy sunning himself by a tree right on the side of my apartment building 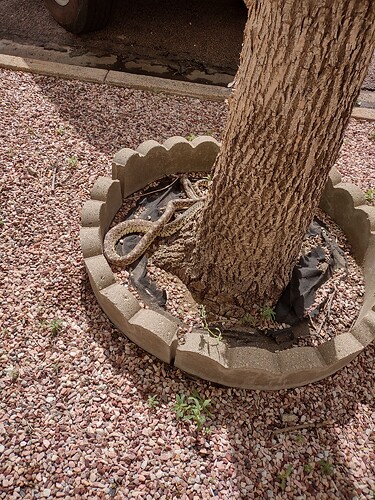 IMG_20220531_155439206_HDR1500×2000 1.84 MB
My roommate says it’s a Bull snake (which-after me hysterically asking what a bull snake is because we don’t have them in Alabama) which is apparently a chicken snake on steroids and will eat the rattlesnakes. Not that ANY of that mattered to me because I’m petrified of snakes and had I not had Ziggy’s leash in one hand and baby wearing Raye I’d have probably ran straight out of my shoes. I was only able to snap a picture from across the sidewalk up against the building.

BACKKK to my theory… I’ve also been seeing the numbers 1111 & 222 daily since our arrival here too. I know there are a couple of you who work with Hecate. What was your experience leading to work with her?
10 Likes
TheTravelWitch_Bry June 2, 2022, 9:22am #2

and will eat the rattlesnakes

I’ve never really lived long-term in a place with big snakes in the wild. I would probably panic too- if not get on a plane and fly back north to snake-free snow lands where I’m usually found

I know there are a couple of you who work with Hecate.

I hope you can get some good advice and that if you do decide to connect with the Lady of the Crossroads, that you are able to forge a strong bond!

Good luck and blessed be

@phoenix_dawn
Oh Darlin.
First of all SNAKE!!! Run away, run away! Get the torches and pitch forks
No, no… wait that’s monsters isn’t it. Sorry I’m calm now.
Ok, now that that is out of the way (snakes, ew, ew). OK, so it eats bad snakes, it should continue to do so…far away from here! Ha, Ha!
If you feel that these signs/treasures are leading you toward a Deity, perhaps you should look into that deity.
much love, blessed be
SNAKES!!
Stay safe, pl-ease
Love you
Garnet

@TheTravelWitch_Bry Snakes on a Plane…

@phoenix_dawn The advice I have usually heard about Hekate is that if you think that She is calling you, She probably is. Divination and meditation can help make it clearer.

I love dogs and gardening, I live in the mountains, I revere the Divine Feminine and I work with females in the juvenile justice system - pretty much a no brainer. I read about Her and about magick, and honor Her, trying to advance things dear to her. She is my mentor in magick and my protectress.

And you are in luck, there is a lot of good info on Her.

No idea what kind of snake but such a beauty! I love snakes and have owned a few in the past. I’m a just a baby so I don’t know anything about how to work with Hecate unfortunately.

Snakes are lovely… as long as they are way far away or behind glass! My kids LOVE them, but this mama… nope. I call them nope ropes or danger noodles.

I’d like to offer another perspective, if I may, and in no way do I want to negate your experiences because they’re perfectly valid.

It is common for the human brain to find patterns and this is especially true when we go to a new place. If I remember correctly, you were in a place before where snakes weren’t common at all. Now you live somewhere that snakes are a part of everyday life. Given the season and my experience with snakes, I would venture to say that it’s breeding season. Plus, more snakes are going to be out and about with the warmer weather since they’re ectothermic (cold-blooded; they can’t regulate their own body temperature and rely on the sun to warm up). It is very possible that you’re simply noticing a pattern of animal behavior in a new-to-you place to live.

I think looking at both sides of this – magickal and non-magickal – are important. If you feel in your heart that this is more than just nature doing its thing then go for it! Signs are extremely personal and I just wanted to offer a different perspective that you may not have noticed or thought of.

@MeganB
I find that an interesting concept. My fear of snakes and volcanoes comes from ongoing childhood nightmares.
I thank that is where my fear comes from.
Thanks
Blessings
Garnet

I think looking at both sides of this – magickal and non-magickal – are important. If you feel in your heart that this is more than just nature doing its thing then go for it! Signs are extremely personal

I love you added this!

If you think Hekate is calling to you, she probably is.

I would suggest a meditation and see what comes to you - leave an offering to her when you are done – if can be as simple as a thank you or you can get more elaborate with your offerings.

Do not get discourage if nothing comes to you - you may have to try several meditations before receiving any signs or messages. Meditation takes practice and consistency. As little as 5 minutes a day is all you need. Doesn’t have to be hours long.

Hecate or Hekate (/ˈhɛk. ə. ti/; Ancient Greek: Ἑκάτη, Hekátē is a goddess in ancient Greek religion and mythology, most often shown holding a pair of torches or a key and in later periods depicted in triple form.

The spelling of HEKATE (with a K) is closer to the transliteration of the name of this goddess directly from Greek into the English language.

The spelling of HECATE (with a C) is the Latin transliteration of the name of this goddess, as it was used by the Romans.

Well, when I see a snake in my yard the whole neighborhood knows it because of my blood curdling scream, and here in Texas we have our fair share of them. I believe if you believe you are being called by Hecate, that you are. Trust your intuition.

Snakes on a Plane…

And you’ve got some great advice for ways to connect with Hecate- thank you for sharing them!

I think looking at both sides of this – magickal and non-magickal – are important.

Thank you everyone for your input and advice I will definitely be trying some mediation and divination to see what is to come of it.

It’s funny that you mentioned dogs @SilverBear because I almost forgot that a day or two before the snake appeared (which btw stayed for 4 days before disappearing) a dog jumped the fence across the street from my building and ran after me and Ziggy and the girls which resulted in the owner jumping the fence and nearly being hit by a car to catch his dog before it hurt Ziggy or me and the girls. And I also find it interesting that Hecate’s wheel was brought up because I have had the wheel of fortune pop out a lot in my readings lately.