I found two that I especially like and feel drawn to. I don’t like to pick ANYTHING that I don’t feel a pull or a connection to. That could be because as an air sign one of my characteristics is discernment.

But I found two that are especially BEAUTIFUL!

The green one I am drawn to but it’s called a “fairy wand”? Anybody know anything about this… 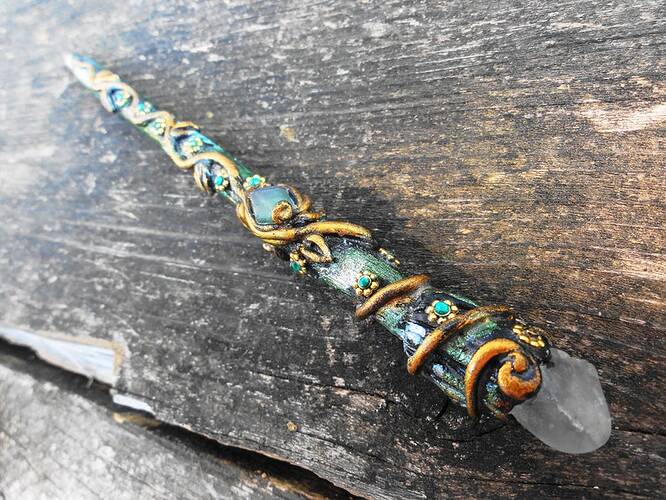 The other has a triple moon, and a pentacle.

It’s honestly probably called a fairy wand for aesthetic purposes and SEO (search engine optimization). I wouldn’t put too much thought into the name of it, honestly. It’s very, very pretty though!

OOh, that is nice!

Wow, that is pretty! I admire the intricate carving. Puts my own homemade stuff to shame…and also gives me some ideas…

I agree with @MeganB. I’ve never heard of a fairy wand, but that doesn’t mean it couldn’t be a thing. Probably just advertising.

Maybe because it looks like a fairy wand? Hahaha.

Funny fact, I looked into this wand deeper it’s a PEN.

BUT I WISH IT WAS AN ACTUAL WAND. ITS SO PRETTY!!

Funny fact, I looked into this wand deeper it’s a PEN.

What a plot twist!

But I mean, for us busy witches that seems like a great way to optimize time- cast a spell, get my paperwork done

Hahaha sorry the wand wasn’t quite what you were expecting, Jyssie- good luck with the wand hunt! I am sure you will find the perfect one eventually