My cat absolutely loves staying outside all day. This is one of her 2 hidey holes and if you touch the plants she will chase you 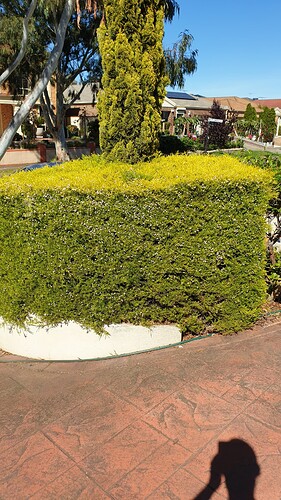 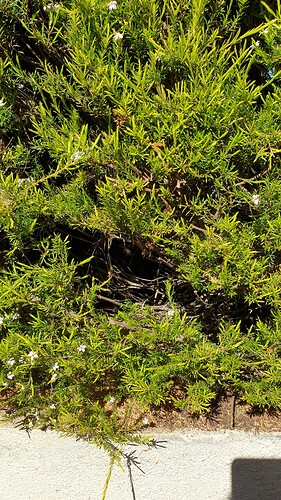 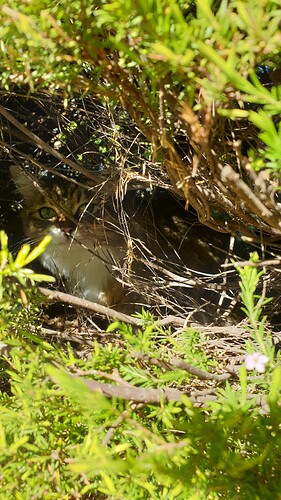 LOL! She’s got herself a little spot down there, it’s probably cool and comfortable! How very cute!

That’s her domain! How awesome for her!

@Temujin_Calidius she looks very comfy in there lol. And she is beautiful

She was a stray kitten out on the streets. She chose us.

She’s very independent. Loves to be outdoors and comes in for food and for shelter in the rain and to sleep at night.

But very friendly. Never hisses, never bites no matter what you do with her.

She’s a very curious cat. When you are reading or meditating or really doing anything, she just wants to be nearby, sitting and watching you.

We had a kitten that chose us too! She was feral & would come to our house in the afternoons. Then one day, she just walked in with us & stayed! She was my 2nd son’s best friend & Moonshine’s buddy. When I went through a major depression, instead of her usual being out & about during the day, she stayed right next to me until I felt better. Which was actually a little over a month. She never left me until I was better. She was amazing.

The kids will annoy her and she’ll get away and stay away from them. But if one of them really hurts themselves and are crying for real, she will come right up and stay nearby.

She was a stray kitten out on the streets. She chose us.

She was feral & would come to our house in the afternoons.

This seems like quite the coven coincidence that everyone is talking about stray cats appearing! Would you believe that a tiny little cat came to our window and has been sitting outside for the last couple days? It’s a tiny little thing and we have no idea where he came from- I was under the impression that spring was the time for babies, but here he is all small in the fall

Thanks for sharing your happy rescue stories @Temujin_Calidius and @Siofra. We’ll see if the little stray here is hoping for a new home like your kitties were

Cats have two or three breeding seasons, they can be pregnant before their babies are weaned. That’s why it’s so important to have them fixed, the cat population can be insane. We had three queens give birth practically at the same time and ended up with almost thirty cats to give away. LOL. We got them fixed after that!

I remember when I was pregnant with my oldest & I lived at my boyfriend’s house at the time with his mother. There was a gorgeous gray cat with a white belly. Not short hair, but not really long either. She was definitely fluffy. I named her Fluffernutter.

We found an animal carrier & put some bedding & blankets in there. Then wrapped the carrier with I believe pillows & put a plastic contractor bag over it, almost like putting the carrier in the bag with the front-facing out of the opening… so it wouldn’t get wet & the pillows were like insulation.

Anyway, she had a food & water bowl. She was young when she first started coming around the house & would follow me in the yard. She wound up getting pregnant & having the babies under the front porch. After she had them, we unwrapped the carrier & had her fixed. She wasn’t allowed in the house & was always outside & free to do whatever it was she wanted, but after she had her first litter, we had her fixed because we figured that wouldn’t be the last of her litters as a feral cat.

Aww. Fluffernutter sounds sweet! And it’s good that you fixed her despite her being an outdoor cat. A lot of ASPCAs will trap ferals, fix them and then put them back in place because they’re feral and never really be adoptable. You did a great thing for her.

We had three queens give birth practically at the same time and ended up with almost thirty cats to give away. LOL.

That is one full house, Amethyst! You must have been up to your elbows in little meowing balls of fluff!

I’m sure it was a ton of work, but just thinking about all the cute little kitties makes me smile

we had her fixed because we figured that wouldn’t be the last of her litters as a feral cat.

I think that was a smart thing to do, Siofra! There’s a program like the ASPCA here in Poland too, and my partner told me that people who rescue stray cats can take them to the vet for free to get them fixed.

I agree that I think it helps them to live easier lives with less complications, and it certainly reduces the amount of stray kitties without homes

That is one full house, Amethyst! You must have been up to your elbows in little meowing balls of fluff!

I’m sure it was a ton of work, but just thinking about all the cute little kitties makes me smile

It was wild. I ran out of names for the cats and one of the orange ones was Doritos. There was Chocolate and Yoda and just all sorts of wild names. I kept charlie out of that bunch and he lived over twenty years. He was a good cat.

Well I just have to say that Doritos, Chocolate, and Yoda are A+++ names for kitties in my book

And awww Charlie sounds like a sweetie! He must have been very blessed and beloved to live such a long happy life with you

He was my buddy, much like Max is now. Always following me. I miss him still.

Once they’re in your heart they never truly leave, do they?

I am sure Charlie is watching over you from the other side, Amethyst- still following you and keeping you safe!

Thank you, my dear! That’s a nice mental image.