TV shows have always been a inspiration for me. Whether it’s the art style, the story, the characters or the themes, there’s always something I’m able to draw inspiration from.

Netflix’s Arcane: League of Legends has given me the inspiration to do some shadow work. I didn’t invoke the Muses, but I did invoke Veaug since he has lent me his wisdom many times since I’ve started practicing. 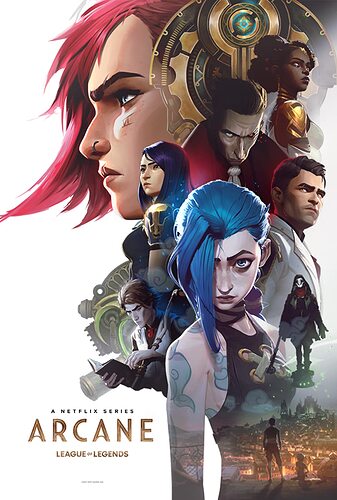 Based on the online game, Arcane has quickly become one of Netflix’s most watched shows with many viewers hailing it as a masterpiece. I played League of Legends in 2009 when it first launched, but I lost interest in it after a few months.

It’s show centers around sisters Vi and Powder (who eventually becomes Jinx), two of League’s famous champions. The setting takes place in the affluent city of Piltover and its impoverished counterpart Zaun. A brief history, Piltover prides itself as a “City of Progress”, leading the way in scientific discoveries and technological advancements. Magic is heavily frowned upon (and feared) because (according to the Council), it’s difficult to control and anyone who wields it (mages) only do so for selfish reasons. 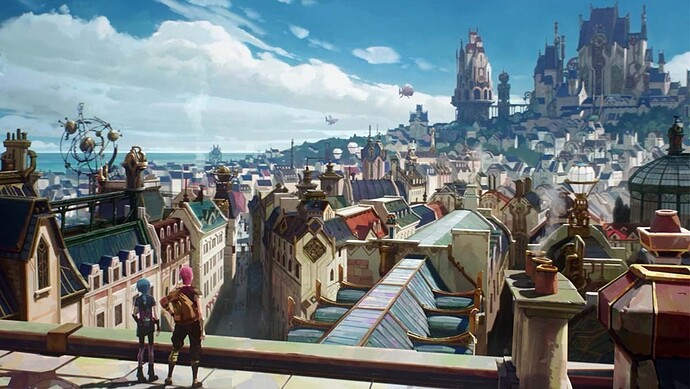 According to League lore, Piltover built a architectural marvel called The Sun Gates to increase trade among the various nations.
The construction is responsible for Zaun’s sinking below Piltover. Its residents live in squalor, surviving on thieving and smuggling. Vi and Powder/Jinx are from here. 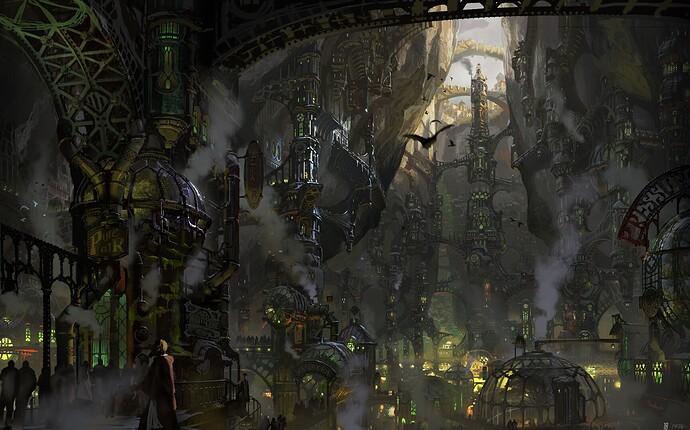 —Spoilers Ahead—
Aracne begins with a civil war between Piltover and Zaun. Vi and Powder are orphaned and are taken in by a man named Vander, along with two other orphans named Mylo and Claggor.
Mylo calls Powder a jinx because something always goes wrong whenever she tags along with them.
They go to a Piltover penthouse to steal some items to sell on Zaun’s black market. Powder opens a chest, finds some mysterious blue stones, and take a few of them. In reality, they are hex crystals, which are a source of magic. Their break in catches the attention of Piltover’s Enforcers and they quickly leave. In her haste, Powder accidentally drops one of the hex crystals, which creates a magical explosion, destroying part of the penthouse.

They make it safely back to Zaun, but Piltover sends some Enforcers to Investigate the explosion. They visit Vander, Vi and Powder’s adopted father. Years before, he had actually lead the rebellion against Piltover for Zaun’s independence. He eventually decides to take the blame for the explosion and turn himself in because many in Piltover are growing restless and the one responsible for the explosion brought to justice.However, as the Enforcers are leading Vander away, they attacked by a man named Silco and his followers. The Enforcers are killed and Vander is kidnapped.

We then learn that Vander and Silco had worked together during the rebellion. Seeing all the death and destruction, Vander surrendered to Piltover, making a peace agreement. Silco vehemently opposed the surrender. After a skirmish with Vander, that exposed him to Zaun’s polluted waters, half his face became marred and turned one of his eyes orange. Over the years, he’s been working on a purple liquid called Shimmer, which gives the drinker superhuman strength.
Vi, Mylo, and Claggor plan to rescue Vander, but Vi tells Powder to stay behind, saying that mission is too dangerous and that she’s the only family she has left (I think the viewer is meant to think the real reason is she doesn’t want her messing things up).

By now, it’s clear that Powder has been greatly traumatized from seeing the war and death of her parents at a young age. She clings to Vi, afraid of losing the last family member that she has. Not only that, her self esteem has been torn down for being called a jinx by Mylo and her inventions never work properly. She has a heart wrenching mental breakdown after everyone leaves and after she’s calmed down, she decides to go help them rescue Vander from Silco.

She puts one of the hex crystals in one of her animatronics, a monkey, and sets it lose it in the building. It explodes, killing Mylo and Claggor.
Gravely injured, Vander takes some Shimmer save Vi and himself, but eventually succumbs to his injuries. The tragedy in all this is the rescue mission was going so well and they didn’t need Powder’s help.

Vi lashes out at Powder, saying that Mylo was right, that she’s a jinx that always ruins everything.
She goes down a nearby alley to cool down, but is arrested by Marcus, an enforcer who is acting a double agent between Piltover and Zaun.

Silco intends to kill Powder, but is surprised when she suddenly hugs him and disowns Vi as her sister. He takes her in and she adopts the name Jinx, becoming one of the most recognizable champions in League.
—End of Spoilers—

I see a part of myself in Powder/Jinx. That is, I have thought many times throughout my life that I can’t do anything right. A result of being teased and bullied throughout my schooling years.

Recently, I’ve been studying programming again so I can get a job that has excellent pay and benefits, and best of all, allows me to work remotely!
But one day as I stumbled across a difficult concept, I thought to myself, “I can’t do this. I’m not cut out for this.”

Shadow Journaling gave me an answer.

My computer science professor in college was an intimidating man who had done programming for the navy in the 60’s. When I first had him, he made us read an article stressing that programmers need to check their work carefully or they could kill someone, citing an incident where chemotherapy patients were given lethal doses of radiation because of a bug in the program.

I now believe this is what slowed me down in learning and why I was so harsh on myself when I made a mistake or couldn’t understand something.

I’ve been telling myself:

What I’m studying is the easiest programming language I’ve studied, so far.

I will not be applying for a job in a hospital or healthcare setting.

I have all the time in the world in study.
There are no upcoming exams.

I’m not being graded.

They’re no assignments to turn in.

And last but not least, I am eager and determined to learn all of there is to know about it.

I can say with confidence that 2022 is starting off well. For the first time in 10 years, I am hopeful for my future. I don’t feel like I’m stuck in limbo, flitting between jobs. I have found the answer to what I want to do: I want to work with computers, but not with Python, Java, C, or C++.

I end this thread with a link to one of the best songs from Arcane: League of Legends:

That being said, I agree that certain anime have influenced a lot in my spiritual life. Many are based on mythology, Gods, and magic.

I haven’t watched Arcane, mostly because I stopped checking Netflix for anime due to them largely ignoring the genre in the past.

I will definitely add that one to my watch list and I’ll keep an open mind on shadow magic to see if I’m also inspired as you were.

Thank you for the great review on it.

My partner watched the first two episodes, a few of my friends are talking about it, and I keep hearing that it is amazing- it’s been on my to-watch list (so forgive me for skipping over the Spoilers section) and this is my push! I’ll see if we can finally find some time this week to watch it

And last but not least, I am eager and determined to learn all of there is to know about it

A calling is a very powerful thing- you’ve got the drive, Kasandra! The interest and enthusiasm is there, and on top of it all I can feel that you have the strength to follow this passion of yours. With your own inner power and Veaug’s blessing- you’ve got this, Kasandra

I am cheering for you- good luck with your programming studies and, most of all, have fun with it! Many blessings to you!

Oh, yes, it’s a must watch, even if you’ve never played League! I’m going to watch it again to see if I’ve missed anything. No spoilers here, but have some tissues ready for episodes 3, 6, and 9!

Hi Franklyn.
I watched a few anime movies but just couldn’t get into a girl having s#x for hours without losing their nurses cap.
Garnet…the clueless

Arcane technically isn’t an anime since it wasn’t made in Japan.
That being said, It’s refreshing to see a western animated show that isn’t aimed at kids.
Animation is art! And art has never been just for kids.

@Garnet If you’re looking for a great anime movie, I highly recommend anything from Studio Ghibli… Howl’s Moving Castle, Spirited Away, or Princess Mononoke.
Problem is, you’d have to buy them or rent them from your location library. Studio Ghibli is against having their movies on streaming sites.

League of Legends, I didn’t get around to playing that game, but I am definitely going to check this series out now after reading such a lovely entry. Computer programming, good stuff, especially if you can get into the AI knowledge aspect of programming (especially dealing with the medical field). There is good money in it.

@Kasandra
If we’re going to recomend classics, don’t forget “grave of the fireflies” sad ending, but still a favorite.
And while I favor the Asian ones, I watch any decent animated movies and series with a good story. And I’m loving that for the last few seasons it seems a few of my light novels have made it into animes.

Anime are Japanese animation and cartoons.

Thank you for the spoiler-free heads up, it’s appreciated!

I watched a few anime movies

Oh dear, Garnet- it sounds like you had an unfortunate start into anime! Like others have said, “anime” is really just a medium- within anime is every kind of genre you can image (romance, horror, children’s stories, X-rated, comedy, slice of life, etc). There is a huge amount of stunning content out there. I hope that you can give anime another try someday and are able to find something you really enjoy!

buy them or rent them from your location library. Studio Ghibli is against having their movies on streaming sites.

I didn’t know that! But now that you mention it, I can’t say I’ve seen their movies available… And that stance of avoiding streaming site drama/competition really does fit with their whole atmosphere!

An update: we devoured Arcane and watched the entire series- you were right, @Kasandra, it is an amazing show! All stunning plot and characters aside, I really loved how they blend together 3D and 2D animation. I’ve never seen a show like it!

Thanks so much for the great (albeit sometimes heartbreaking- you were right about needing tissues!) recommendation!