I was originally going to write an article about ‘Fairy Folk’ but when researching them, I came upon the Movie ‘Willow’ and I had an epiphany.

Willow?! That’s a plant, it’s used in folk medicine and conservation! I’ll write about that instead.

The indominable Willow.
What an amazing and hardy (sometimes too hardy) and wide spread plant/tree/shrub.

Mostly found in the northern hemisphere in moist/wet areas, is a very
useful species of vegetation. I was amazed at the uses of willows.

All willows can be used for medicine, so identifying the exact species is not of great importance.
I thought they were self-propagating. They are not . Male and female flowers grow on separate plants. The tiny female flowers are usually enshrouded in downy cotton, hence the familiar pussy willow . The pollen of the male flowers often has a bright yellow hue that attracts insect pollinators. The pollen is also carried on the wind. Once the female flowers are pollinated, they swell into seeds and take flight as their downy tuft is pulled by the wind. Seeds root in open, wet soil, and thrive in the wake of disturbances including floods, slides and fires.

Medicinally: Willow has a long documented plant that has been valued as an anti-inflammatory, pain reliever, fever reducer, and bitter tonic for thousands of years. Its use was documented in 4,000-year-old tablets from ancient Sumeria and it was perhaps the most important of 700 medicines mentioned in the Ebers Papyrus from Egypt in 1534. In China, Europe, and the Americas, it maintained a mythic status for countless generations.
FYI: While all willows are medicinal, the medicine strength can vary depending on species and where the plants grow.
Willow — Wild Foods and Medicines

Conservation: Willow roots spread widely and are very aggressive in seeking out moisture; for this reason, they can become problematic when planted in residential areas, where the roots are notorious for clogging French drains, drainage systems, weeping tiles, septic systems, storm drains, and sewer systems, particularly older, tile, concrete, or ceramic pipes. Newer, PVC sewer pipes are much less leaky at the joints, and are therefore less susceptible to problems from willow roots; the same is true of water supply piping.
A small number of willow species were widely planted in Australia, notably as erosion-control measures along watercourses. They are now regarded as invasive weeds which occupy extensive areas across southern Australia and are considered ‘Weeds of National Significance’ . Many catchment management authorities are removing and replacing them with native trees.[
Horticulture: An aqueous extract of willow bark is used as a fungicide on horticultural nurseries in the European Union and United Kingdom.

Being a born and bred Yankee, my first thought of the Willow was the majestic Willow tree. My childhood home had one growing next to the house. 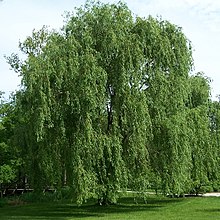 My mother worked for the Cattaraugus County Soil and Water District.
In Western New York for over 40 years, so she’s is source of some of the next paragraph (That and my sketchy memory of what she told me.)
Since western New York is subject to heavy snow, it follows that flooding in the spring is excessive. With flooding came erosion and in order to control erosion willows, (I don’t remember the exact species, we just called them River Willows. ) were planted because their extensive root system grasped and held onto the soil and decreased erosion. It became one of those back to work projects one summer to plant them along the creeks to save the bank soil from being washed away. It was a good program. They also planted trees to repopulate those that had been over cut.

My Uncle owned a huge farm in southern Cattaraugus county and the Great Valley Creek meandered through his hayfields. He had the idea that if he straitened the Creek of its many turns and curves that he could more efficiently manage his fields.
BUT he hadn’t reckoned with Mother Nature, silly man. Within 10 years of spring floods, She rearranged the Creek to her liking, curves, turns and all. He tried again with about the same results.
He gave up.

The Mother always has her way!

I’d like to thank Wild Foods and Medicines for information gleaned.
I would also like to thank those who took the time and effort to create Wikipedia That was so important and informative for this small paper.