Coincidence or did crystals mess with the life force of my plant?

Not sure if this is a coincidence, but I suspect one of my crystals sucked the life out of my bay laurel. Has anyone have any experience with such? 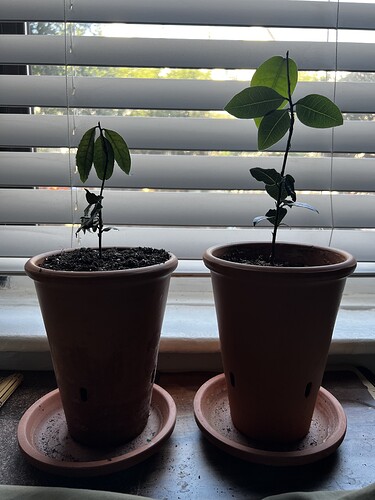 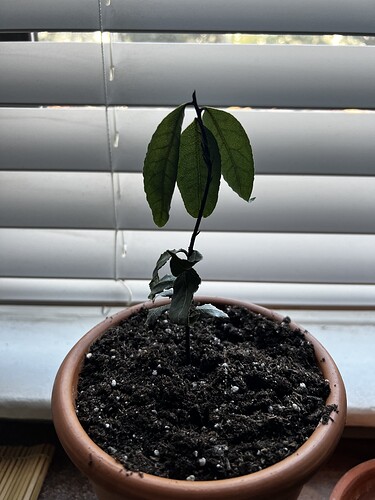 The top 3 leaves, both sprouted out about the same time, growing pretty fast for a bay laurel, they were doing fantastic, both received the same treatment in terms of watering, nutrition, and lighting. Then I bought some new crystals (cleansed them, or I thought I did) put them next to the bay laurel to charge in the sun light, but left them there for a while, and the bay laurel to the left dried out. The crystals include clear quartz, fluorite (skull), and lapis lazuli (smaller skull). This is the way they were payed out, next to the plant (moved the crystals awhile ago). 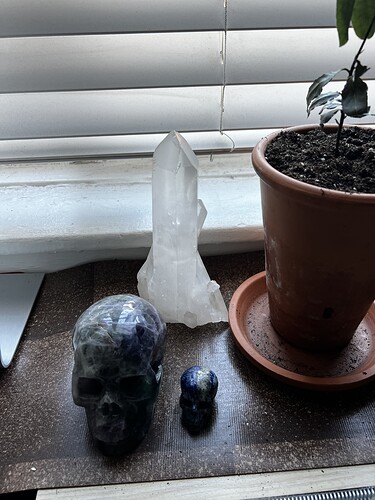 Poor bay laurel, did the crystals do something?

All the resources I’ve looked at have said crystals, especially clear quartz, can boost the growth of plants rather than kill them. I would test this out with another plant and see if the same thing happens. If not, then it is possible that the particular bay laurel plant that’s dying may have something wrong with the roots, a genetic defect that makes it not grow, or it just has different needs than the other plant next to it.

If you experiment, let us know how it goes!

Good idea, will try it with another plant, just not the bay laurel though, if it happens again, then there may be situation. If not, then just as you said, the plant may be defective or have other needs.

I’ll leave those crystals alone, no additional cleansing or charging, to test out again.

That’s amazing what happened with your plants!p0

I usually place rose quartz as well as clear quartz in my plants for love and growth. This year I didn’t and they’re not doing that well. Theyre dried out although i water them. And they don’t last as long. I also drew sigils on the pots but this year I didn’t.

I believe crystals and plants have energy. They work to help each other out for the greater good.

Have you gently pulled the left one out to check for root rot? That can starve the plant before it kills it, so that it can’t get water.

Also, just speaking from bad experiences on my end… the pots look like they might be a little deep for such small plants. If a pot I has too much soil vs how much roots a plant has, it strugggles with getting all the wetness in the soil and the roots can rot. Root rot is like the plague for a plant, it will kill it if you don’t catch it.

Each plant, even if they’re the same type of plant, needs different watering based on size, root density, pot, etc. And watering plants on an exact schedule isn’t great, they’re like us, they only eat when they need it and we can drown or starve a plant if we try to force them to be on an exact schedule.

Just some of my thoughts. I lost five spider plants to root rot due to small roots and big pots, and trying to feed them all at the same time each week. I struggle with keeping plants alive due to overdoing things.

(Please know I’m not trying to accuse you of any of this, I’m just sharing my experience!)

You experienced what was supposed to happen, crystals and the plants working together harmoniously, even keeping your plant alive.

I’m going to try it out again with another plant (do feel a little guilty doing it, if the crystals didn’t interact well or sucking the energy).

You brought up so excellent points to check out. I’d tell my hubby who has taken over caring for the plants, especially with changing the pot. Because honestly, I would and have unfortunately done some of the things you wrote, the plants were not doing to well under my care, and when my partner took over, the plants are striving.

I had an English ivy, so beautiful, and I put the plant in a much much larger pot and now there is only three pieces left from like 20, so moved the three into a smaller pot. I’m still very much learning. Very sadden by losing those plants. With that, the pot may very well be too large.

Don’t be too hard on yourself… you love your plants and you’re trying. I had to go watch videos on plant care, it helped some but I often kill mine. Usually just as I think they’re starting to thrive. For me, I tend to overdo it and it gets them killed. Like if they look sad, I immediately think they need water when they often don’t.

So you’re not alone! Your plants know you love them. I’m grateful that there are so many online resources now to help teach us how to care for them when we’re struggling!