Hello my fellow witches,
since it’s the Valentine’s day, I have decided to do some cord cutting, since it has been over 2 years and I still dwell over this person. I would like to share my reasult with u guys. I am honestly not sure what to take out of it, since my candle was entirely burned to the ground.
The candle on the left, the one in flames is mine, the other one is his.
Blessed be!

I have never seen that happen. Did you anoint the candles with oil? That might be a cause. However, his didn’t do the same

. Now going on the spiritual side, you might have had more repressed feelings towards him than you thought. Might need more glamour magick?

I did not anoit anything… the breakup was very painful to me. I do have a lot of represed feelings, keep having dreams about him, so I thought this might help…

Ok, try this. (If you want). Write a letter to him. Don’t worry about what to write, spelling, grammar, or if it can be read. No one will read it. Take the letter write positive affirmations to yourself that has happened after the breakup, over what you just wrote (ie, learned to love myself). Light a white candle, black candle and pink candle(or blue for healing). Then in a fireproof container (if your culdren is too small)fold and burn the letter while saying aloud the positive affirmations you wrote. Allow the universe to ‘deal’ with it.

Wow, that is some impressive spellwork- I can see why you would be curious about the result! May I ask which/what cord cutting ritual you used? Was there anything strange about the actual cutting of the cord itself, or just the candle work?

My instincts are also pointing to what Flowing said- that perhaps you had much more invested in this relationship than your ex did. While his candle burned as usual, yours had to ignite entirely in order to burn away all of the lingering feelings you were holding onto. If this is true, then hopefully this spell helped to cut and burn away any remaining bonds between you.

If you still feel unsure, I would recommend following up with some form of divination to get more insights. Since you were unclear about the candle part of the spell, you could try a wax reading

Basically what I did was that I picked 2 red candles, sinice it used to ve Very passionate kind of love, then I wrote my name on my candle and his name on his candle, took a string and wrapped around Both candles 5 times, since we were together for 5 years. Then I casted a circle, prayed for strenght , lit both candles and then I sat there and tried to concentrate on the feeling of letting go.

It was his candle that lit the string the first and then from all of the sudden mine just Burst into flames and then fell… the fire was HUGE. It kind of sared me

I can feel the tension I used to feel gone, just a little tingle, like a little memory, so I guess it helped!

Tank everyone for their helpful insigts.
Blessed be!

I don’t know what to say about the size of the flame. Absent magic, one would have to say that there was an accelerant of some kind, but you didn’t anoit the candle so that doesn’t fit. I know that putting candles too close together can cause one to burn faster due to heat and natural air circulation. I’m trying hard to rule out the mundane here. I would almost say to do it again under the same conditions and see if you get the same results.

Or you could get even more magical and try a different cord cutting ritual. The only problem is that it is kind of paradoxical - you have to think about the very thing you are trying to forget. So supercharge your magic with the mundane by writing down what you were doing or thinking just before you thought of him. Recognize those things as triggers and either reduce or alter those activities so that you aren’t constantly re-activating thoughts and memories of him.

My tone may sound cold, but believe me, I am far too well acquianted with what you are feeling. You find support here.

it looks like a woman dancing in the flames , I can see her hips and her upper breast area it seems as though she’s dancing for him.

I really like this advice you have given blessed .

I would venture to say it worked! If the candles burned down at the same way/speed, there wouldn’t be much ‘cord cutting’ represented therein! You are now separate flames, and you get to rebuild, starting from that lovely pool of wax. I also agree with @TheTravelWitch_Bry that you should read the wax.

@dilltarot - YES! I see the flame dancer as well. 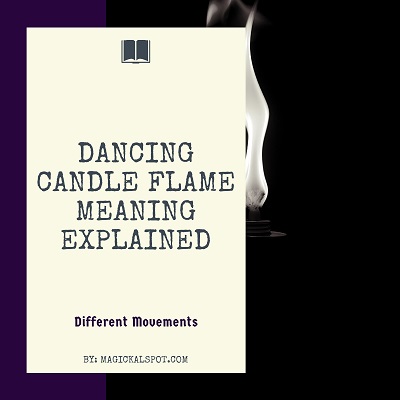 In this article, we'll learn more about the meaning of a Dancing Candle Flame. We'll also learn about specific movements.

I can feel the tension I used to feel gone, just a little tingle, like a little memory, so I guess it helped!

I’ve found in my experience that the best determinant of spell success is how the caster feels afterwards- from what you’e said, it sounds to me like it was a success, Mila!

Congrats to you, enjoy those good feelings. And if you do decide that you’d like to explore the result further, a divination reading can help you do so