Cow and other animal skulls around on on altar meaning

Hi yal, so i wanted to know is there a specific reason people put animal skulls such as a cow skull on or above the altar? I seen on in a shop the other day and it was so beautiful so i decided to see if i can get one online and found a synthetic one with flowers on the top and was just stunning… Is it a sign of the horned god or another reason i have not picked up on yet?

I was just listening to a podcast this morning on bones. They were talking about how animal bones are seen especially during hunting season. And that bones have their own powers, some people believe they are taboo while others don’t. Bones stay around for hundreds of years. Antler sheds were of significance as well. Sorry I couldn’t be more descriptive than that. 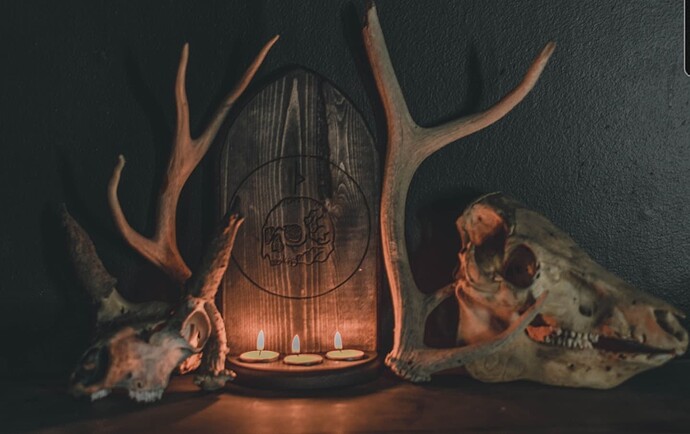 Ooo I want to do something like that now.

That’s a great question- I’ve also seen many pictures of altars that have animal bones or skulls. I always figured it was related to the type of magick that person does (such as nature or animal rituals, afterlife/death or spirit communication, etc.) or their own personal spiritual space aesthetic.

I don’t currently have any bones or skulls among my witchy tools, but I do collect things like feathers and I once had a deer antler I found

. I’d also use animal parts such as fur or scales.

I think using animal bones and parts will largely align with Craft ethics- I personally have no problem collecting and using animal parts I found in nature that were shed or lost naturally. I do not take things that, I believe, carry pain (such as death or suffering) with them. Just my personal practice!

I know @IrisW has very respectfully collected and used animal bones and parts in her practice. She shared a great post that you might find interesting: Uses for Skeletons of Dead Birds and Animals

If you were being drawn towards the cow skull, you might want to look into adding it or something similar to your collection! It sounds like it wanted to come home with you

Thanks for linking to my thread

I did go on to use these bones in a spell jar: First spell jar.

For me, as I said in the thread linked, I hate waste and I wanted to honour life of the bird who had passed. As part of creating the spell jar I thanked the bird for allowing me to use its bones.

I also have quite a few feathers on my altar. Some are from my own cockatiels, they shed quite a lot in the bottom of their cage, and others are from Crows and Magpies that I’ve collected on walks. I’ve also got one bright turquoise feather I picked up whether has either been artificially dyed or comes from a Kingfisher (we do have those on the stream running through my local woods). It was pretty though so I cleaned it up and it’s being guarded by my statue of Hekate.

I’ve also been using my airfryer to dry flowers and there are a fair few dried flowers on my altar as a result. I quite like including things from nature.

I don’t have the correct answer. I’ve always thought that it gives you the energy of the animal and gives your magic an amplifier from the animal it came from, as long as you ask for permission from that animals spirit and look for signs (like meditation). Either way, I love them. It’s a part of life and it’s beautiful.

It’s going to vary from practice to practice. Some people use bones for decoration. Others work with bones as vessels for their spirit companions.

Would have been nice to do something for that little bird… Do you think it is the same for pets? I had a budgie or two die in the past and would be nice to know ow if there was something i could have done after the passing… I know my sister her cat recently passed and the cremated the remains and got a urn made to look like him so they can remember him by… But i guess that is not the same thing…

I have the remains of my late dog in an urn on one of my altars. Well actually a mini urn on my bedroom altar representing earth, and a kind of altar/shrine of his own with his big urn and a photo of him.

Oh that is a nice way to remember your beloved pet