Eclipses and why some people see them as bad?

Hi so as my question above asks, why is it deemed by some witches as bad? I decided not to do a spell on the partial eclipse which passed as i had a bad feeling about it. Would love to hear the different opinions

I know that in ancient times, an eclipse was a bad omen because in some cultures (such as Egypt, for example) one of their most important gods was the Sun, and seeing it “disappear” from the sky, even for a while, could be considered as something very bad.

I didn’t have the energy to do any kind of spell either, and I was preparing the Solar eclipse spell which is posted on the website, but suddenly I felt like I was running out of energy and spent the afternoon sleeping and feeling exhausted.

My opinion: Eclipses are liminal times. I think that very often that the judgements people make (good/bad, etc) are reflections of their viewpoints and biases. They show, without astrology or any other divination, aspects of the person’s personality (yeah, I kinda blenderized metaphors and terms there). Some people fear eclipses because the liminality of them makes thin the veil between who they know they are/try to be, and who they are afraid they are or might try to be. They fear a loss of control - of themselves and the world that is familiar to them.

Or look at it this way. We’ve all heard the quote, “What is normal for the spider is chaos for the fly.” Some people fear eclipses for the same reason. If the world is turned upside down, conditions are reversed. They are afriad to be the fly becuase they know what they do when they are the spider.

So basically, either a loss of control or a fear of their own dark side. I guarantee that’s my opinion, or double your money back.

Eclipses in themselves are, for me, dangerous but nothing to fear. I am certain and committed to my morality. Even if I am unsuccessful sometimes, my intent is moral. What makes them dangerous is the less certain folks. It’s like driving in snow - the other drivers are more dangerous than the weather itself.

SpanishWitchy and Undomeher gave some really great advice and wisdom

I don’t have much more to add, just that I would encourage you to go with your gut about these things (as with pretty much everything in magick!)

i had a bad feeling about it.

Having a standard when it comes to working/not working/resting during certain moon phases or celestial happenings can help build routine and stability in a practice, but it’s okay to use these simply as guidelines and let the moment and your intuition be the true “laws” in your practice.

That is to say, if you usually cast spells during the full moon but get a bad feeling one month, no harm lost in taking a needed rest. Same with new moons or eclipses- you may feel called to cast but have a bad omen or warning at the last minute and decide to halt plans.

I don’t usually cast during new moons and am rather neutral about eclipses, but something really pulled me during this last eclipse that drew me to casting and working in my practice more than I usually do. Something about the Scorpio energy just called to me!

The same field or garden may thrive one year and barely yield any crop the next- things wax and wane within the structure of set cycles but sometimes they are influenced by outside forces. In such cases, I truly believe our intuition that we work so hard to hone and use is our best guide

Forgive me for rambling haha, but I think you made the right call with trusting your gut feeling!

Wishing you all the best- Blessed be!

Some witches see them as not a good time to cast because they feel the energy is too chaotic. Or, as @SpanishWitchy put it, the belief that eclipses should be avoided may be based in the ancient view of them being a negative omen.

I go with what @TheTravelWitch_Bry said – trust your gut when it comes to these practices. I’m also neutral when it comes to eclipses. I didn’t do anything for the eclipse and I didn’t feel called to do anything either. However, I’m feeling more and more like myself these days and I did more spells this morning than I’ve done in a while!

@TheMuslimWitch I am also in agreement with everything our coven has said above. I will add this - I love the new moon and eclipses. I had my husband put a water bottle outside so I could get new moon water during the partial eclipse the other night and I am so happy with it, it is very rare occurrence and will serve me well with many of my spells and rituals. You have to determine with the type of practice you have what you believe in as far as it pertains to the new moon and eclipses, then that is what you do!

I can relate to the out of energy thing but was parted so decided to not do any spells. I however, feel it would be very powerful if i had done…

Some people fear eclipses because the liminality of them makes thin the veil between who they know they are/try to be, and who they are afraid they are or might try to be. They fear a loss of control - of themselves and the world that is familiar to them.

Damn i should have so done a spell… I am trying to go with my intuition but i always doubt it and ignore it only to be smacked in the face from the consequences of not doing so then i straight away say “i knew it” or “damn i should have listened to my heart”… I am not afraid of my dark side and to be honest it cannot be blocked so i try to embrace it and acknowledge it and if it is not healthy for me i will meditate and just be like “this is who i am and a part of me so i will learn to live with it if i can’t love it”.

let the moment and your intuition be the true “laws” in your practice.

Buy do i always doubt it as i said to @Undomeher only to regret it soon after… I am trying hard to listen to my intuition and stop thinking “nah i am just being silly”. I is hard when everyone around you doubts you, it becomes a habit and you even doubt yourself… I am glad i am aware of it and even feel i need a tattoo on my forehead saying trust your intuition just to remind me everyday…

if you usually cast spells during the full moon but get a bad feeling one month, no harm lost in taking a needed rest.

Omg this is me most of the time making excuses like i have studies or oh i can’t the kids etc… Sometimes i just specifically wake at 5am just to get in some witchy me time to start my day. Sometimes this is the way to go in such a chaotic life… 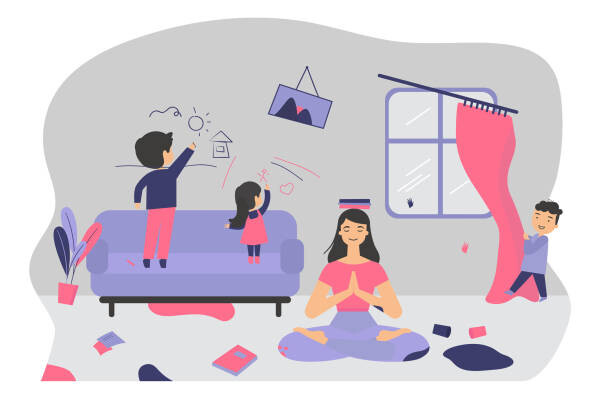 Way to go… I really should stop saying to myself “i wish i could do that too” and do it. For me its not the time as i am sure i can spare some time to do it, its the do not disturb part and i don’t want my spells to go upside down as a result of my frustration…

But I think the more time we take to search for our inner voice of intuition, the better we become not only at hearing it, but also being able to distinguish it from the rest. I know I’ve still got a long way to go, but it’s an active work in progress! I’m cheering for you too, @TheMuslimWitch

This is me btw

Hahaha I love this picture

I feel like this some days too, although I don’t have all the kids and bunnies- just so many cats and my own personal chaos lol