Oh, my goodness, Did I say curb…I meant off a cliff. Just sayin’
Garnet

Hahaha. Even that would be too good for him. I think that even the cliff would spit him back up I think . 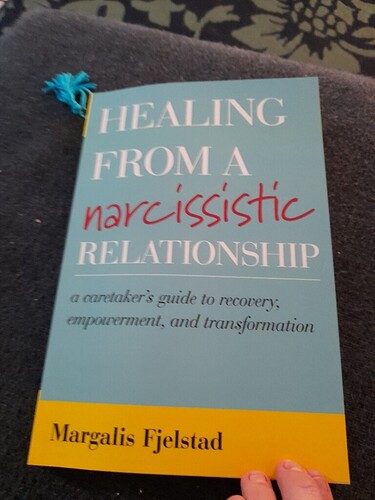 Within the first 10 pages I found a paragraph that shook me to my absolute core. I couldn’t have described my relationship with Mitch any more accurately… 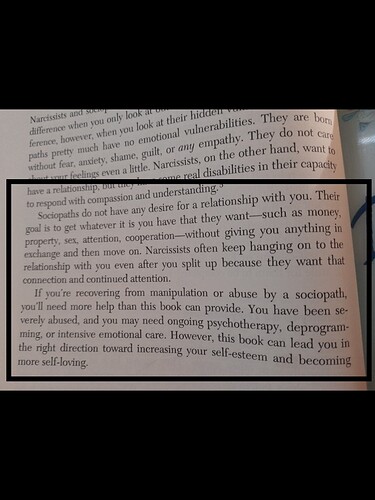 For all those years that he was a part of my life there was this little voice in the back of my head that would be telling me that he only wanted me for what he enjoyed from me physically and my money.

I think that maybe there’s something more to him than simple narcissism. I think that I am lucky to have survived for the 15 years that I did and even escape when I did. This single paragraph is us 100% without any question.

This one paragraph helps me to understand why he dropped me as easily as he had, he had someone else already. He only kept me because he got things out of me that he enjoyed. Me as a person meant nothing to him. My loyalty, support and devotion for 15 years meant nothing. It didn’t bother him when I ended our 15 year relationship. It was just an inconvenience for him because his game was over. Because I told him no more support with money (even though it was up to me whether or not I chose to keep giving him money and he was going to struggle as his work were doing pay cuts) - his exact words to me. That’s the only thing that bothered him.

But I was so deeply in love with him. I mean to the point where I loved him more than I loved myself. He was my number one priority in almost all aspects of my life. I believed that there was something not right with me. Being an empath I was literally his perfect prey. He was my first and only love. I have never known anything different than how he chose to treat me. I am lucky to be free.

This book has so much information on emotional caretakers and empaths. I have so much that resonates with me, how I am and the role I played in our relationship in the little bit that I have read. I think this one may be best early Christmas present to myself this year.

Wow. That paragraph is more than slightly scary. I’m so glad you dumped his butt.

I know right! it shook me in my little bootsies that’s for sure! Talk about a smack between the eyes, a wake up call and a good rattle all in one.

Thank you Jessica for the recommendation, I have a big heart too and it’s good to educate ourselves and shied ourselves from these kinds of people!
Jeannie

You’re welcome and I totally agree. From what I have read so far in this book it has opened my eyes so much and it is making so much sense. Almost as if the author was literally writing chapters that matched my relationship.

I really want to get this book I wonder if it’s inn audio?
Jeannie