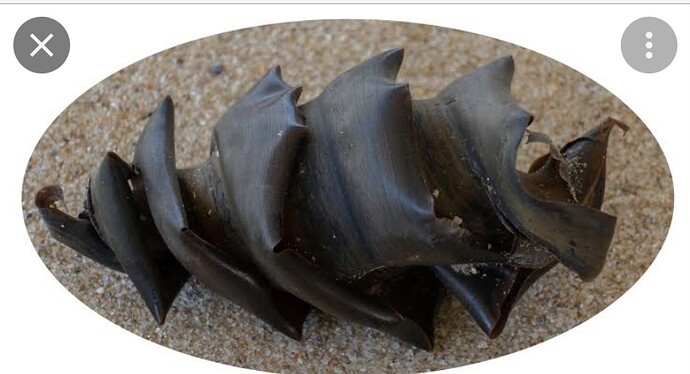 image827×449 91.9 KB
Dear All,
Few weeks ago I saw a video of a fish eating a shark egg, precisely a Port Jackson shark eggs which has an interesting spiral shape.
I felt the urge to have it so without thinking I purchased one online.
When I told my partner he made me realised what I have done: I basically supported a market that see human stealing shark’s eggs for profit and felt immediately super bad about it.
It’s true, I shouldn’t have done it, I wasn’t thinking but remained the fact that I did and today it was delivered to me.
Speaking with my Shaman friend, she agreed with me that it was better not purchasing it but she also made me realise there must to be a reason why my instinct was to get it and probably it is going to be of some important magic use.
I want to do a ritual to make it worth the sacrifice and maybe put it somewhere to give it back to nature or to the ocean.
My question is, does anyone know of some magic ritual with an egg?
Ps. I am truly sorry and regretful

Someone once told me that our first initial response to something is what we are trained to do, but the thoughts and realizations that come after reflect who we really are. It sounds like you acted in the moment, but your kind heart and mindfulness weren’t far behind.

Although the egg already arrived, I agree that using it in some way that gives back to nature is a very thoughtful gesture

does anyone know of some magic ritual with an egg?

I can’t think of any spells or rituals that require a shark’s egg, but I did think of a few things to consider:

Just a few thoughts you might consider- I’m sure the coven will have more ideas for you!

Awww thank you so much!!! This are really helpful tips to keep into consideration whatever I decide to do!
I think the egg is already dead unfortunately and it has a funny smell. If I decide to put it on my altar (which was my original intention) I will most likely cover it in resin to preserve it long term.
Thanks again and I will keep doing some research

I just wanted to pop in and point out that what you have is probably just an egg casing. Most sharks incubate their eggs inside of themselves and then when the pups hatch, they also release the egg casing. Egg casings often wash up on the shore.

While I can’t know for sure, I would suspect you probably just have a casing. I applaud you for your care and concern for our sharks though!

I am twitter friends with several shark experts (I love sharks) and I can ask them if there is a way to tell if it’s hatched or not!

@WitchOfTheForest I’m happy if I could help, even just a little!

The resin idea could work- that’s very creative! Although if there’s enough organic material inside, it would probably still continue to rot inside the resin

Good luck with your research and I hope you’re able to find the perfect use for it!

@AileyGrey Educational Ailey to the rescue!

A shark expert would definitely know best about the shark egg- that’s really kind of you to ask!

Hello,
I am too new to offer advice on spells etc.

When I saw your picture I looked up shark eggs - I thought they only have live births but indeed some lay eggs. Apparently the shark that lays this egg scoops the egg into their mouth to find a place to put it so it would be secure from the ocean currents. https://www.nhm.ac.uk/discover/do-sharks-lay-eggs.html

I looked up what to do if I found a shark egg- if the one you have is empty then likely you don’t have anything to feel bad about. https://www.sharktrust.org/eggcase-hunting
If it is empty, you can clean it, put resin on it and keep it on your altar.
Maybe spend time looking at your instinct to buy it and come to terms with that-was it just a knee jerk buy that you should be wary of or will this item/instinct to buy it bring about something positive.

Thank you. I learned something new today and I am going to ask my 12 year old if sharks lay eggs - he loves learning about animals and knows some pretty random facts. I am curious if he knows this one.

I just wanted to echo the sentiment that it was probably ethically sourced, especially if it’s empty. Someone probably found it washed up on the shore and makes a living selling them. There’s usually no harm in that! I do second the resin idea, especially if the egg is smelly

I don’t have any current ideas for spellwork, though, but maybe you could use it as a connection to the Spirit of that particular shark and see if they can be helpful to you. You just might find you have a new spirit ally!