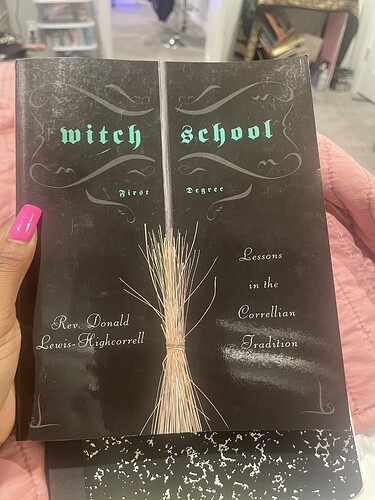 Have anyone read this

I haven’t read it, but it looks interesting! Also, your nails are pretty.

I would say it’s great for beginners

I was about to ask if you would recommend this for beginners? I have two books I’m purchasing, I don’t want to overwhelm myself, but I want to start out where I need to and not get books too advanced just yet. It looks really interesting just from the outside!

Congrats on your new book, @Babywitchbxtch!

“Lessons in the Correllian Tradition”… sounds interesting, I can’t say I know much about that group! I googled it, and it sounds like there is an official website somewhere but I can’t seem to find it (perhaps it is blocked in Poland/the EU?)

While not known internally as a “Wiccan” tradition until the 1990s (Orpheis Caroline initially called it a “Nativist” tradition, but the tradition would become increasingly affiliated with the Wiccan current in the 1970s under its third first priestess, LaVeda High-Correll), it adopted the trend toward eclecticism and universalism which would later typify most of the early Wiccan traditions.

It sounds like the Correllian Tradition is a subset of Wicca, but I can’t find much more than that. Perhaps its a more secretive group? I’m curious to hear more about it- let us know what you think of the book, Lotasha!

OOh, how interesting looking! I hope you like it!