Persephone 🥀 Goddess Queen of the Underworld

Persephone - The Poems of Sappho

I saw a tender maiden plucking flowers
Once, long ago, in the bright morning hours;
And then from heaven I saw a sudden cloud
Fall swift and dark, and heard her cry aloud.

Again I looked, but from my open door
My anxious eyes espied the maid no more;
The cloud had vanished, bearing her away
To underlands beyond the smiling day. [1] 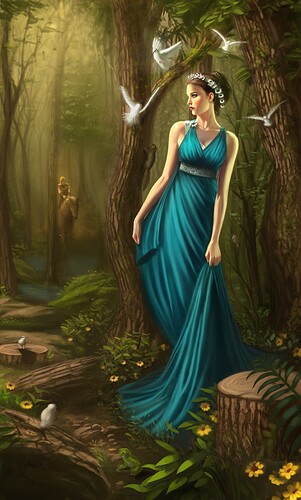 I have been drawn to Persephone for a very, very long time. Literal years, if I am being honest. I have never approached Her for a relationship and I have feelings about moving out of the Irish group of deities, but that is just my own stuff to work through. I wanted to give more information about Persephone and Her myths as I work through my thoughts on Her myself.

Persephone is the Greek Goddess of spring growth and the Goddess Queen of the underworld, married to Pluto (Hades). She is the daughter of Zeus and Demeter, and her myth explains the causes of Spring and Autumn. She was worshiped alongside her mother Demeter in the Eleusinian Mysteries. She has many names, but the most common are Kore and Persephone. She is referred to as Kore when she is Earth-side, bringing Spring to the land by her return as Demeter rejoices. As Persephone, she is the Queen of the Underworld for the dark half of the year, aiding Hades in the receiving of the dead.

“The cult of Persephone was especially strong in Sicily and southern Italy, and besides the Eleusinian Mysteries at Eleusis there were sanctuaries to the goddess across the Greek world, most notably at Locri Epizephyrii, Mantinea, Megalopolis, and Sparta. Here annual festivities celebrated Persephone’s marriage and her picking of flowers. The Thesmophoria was a Greek-wide celebration of the goddess and her mother. Exclusive to women, it was held annually before the sowing period when sacrifices were made and putrefied pig’s remains were mixed with the seeds. Persephone, in her guise as Queen of the Underworld, was often appealed to in curse tablets and on the inscribed gold leaves buried with the dead followers of Orphism which gave instructions on how to conduct themselves in the after-life.” [2]

Her myth is controversial because of the many interpretations and the name of one of the myths. The Rape of Persephone has been interpreted metaphorically as well as literally, and it is up for personal interpretation as well. The Homeric Hymn does literally state that Hades secretly gave her a pomegranate seed to eat, knowing that if she did so, she would have to remain in the Underworld. What’s interesting to me is the question of how does one secretly place a pomegranate seed in another’s mouth? I have never got the impression from my studies and feelings of Persephone and Pluton’s relationship that She was tricked, though it would be hubristic of me to assume anything about the Gods at all.

You can read pieces of the myth below from Homer, and I will link to other sites as well so you can make your own interpretation. There are many ways you can honor Persephone in your life and practice. One of the main things to do to honor Persephone is to leave offerings of fresh flowers on your Altar. According to Theoi.com, asphodel is a sacred flower to Her [3]. If you have this available to you, this would be the recommended offering. Another offering would be anything related to pomegranates. You can also learn her hymns and recite them.

Orpheus – Myths of the World

“Demeter, knowing that one of the Gods had carried off Persephone against her will, and knowing that what was done had been by the will of Zeus, would go no more into the assemblies of the Olympians. She quenched the torch that she had held in her hands for nine days and nine nights; she put off her robe of Goddess, and she went wandering over the earth, uncomforted for the loss of her child. No longer did she appear as a Goddess gracious to men; no longer did she bless their fields. None of the things that it pleased her once to do would Demeter do any longer.” [5]

“Now when all-seeing Zeus the loud-thunderer heard this, he sent Argeiphontes [Hermes] whose wand is of gold to Erebos, so that having won over Aides with soft words, he might lead forth chaste Persephoneia to the light from the misty gloom to join the gods, and that her mother might see her with her eyes and cease from her anger. And Hermes obeyed, and leaving the house of Olympos, straightway sprang down with speed to the hidden places of the earth. And he found the lord Aides in his house seated upon a couch, and his shy mate with him, much reluctant, because she yearned for her mother. But she was afar off, brooding on her fell design becuase of the deeds of the blessed gods. And strong Argeiphontes [Hermes] drew near and said : ‘Dark-haired Aides, ruler over the departed, father Zeus bids me bring noble Persephone forth from Erebos unot the gods, that her mother may see her with her eyes and cease from her dread anger with the immortals; for now she plans an awful deed, to destroy the weakly tribes of earth-born men by keeping seed hidden beneath the earth, and so she makes an end of the honours of the undying gods. For she keeps fearful anger and does not consort with the gods, but sits aloof in her fragrant temple, dwelling in the rocky hold of Eleusis.’

So he said. And Aidoneus, ruler over the dead, smiled grimly and obeyed the behest of Zeus the king. For he straightway urged wise Persephone, saying : ‘Go now, Persephoneia, to your dark-robed mother, go, and feel kindly in your heart towards me : be not so exceedingly cast down; for I shall be no unfitting husband for you among the deathless dods, that am own brother to father Zeus. And while you are here, you shall rule all that lives and moves and shall have the greatest rights among the deathless gods : those who defraud you and do not appease your power with offerings, reverently performing rites and paying fit gifts, shall be punished for evermore.’

When he said this, wise Persephoneia was filled with joy and hastily sprang up for gladness. But he on his part secretly gave her sweet pomegranate seed to eat, taking care for himself that she might not remain continually with grave, dark-robed Demeter. Then Aidoneus Polysemantor (Ruler of Many) openly got ready his deathless horses beneath the golden chariot. And she mounted on the chariot, and strong Argeiphontes [Hermes] took reins and whip in his dear hands and drove forth from the hall, the horses speeding readily. Swiftly they traversed their long course, and neither the sea nor river-waters nor grassy glens nor mountain-peaks checked the career of the immortal horses, but they cleft the deep air above them as they went. And Hermes brought them to the place where rich-crowned Demeter was staying and checked them before her fragrant temple.” [6]

The story of Persephone is one I can relate to. She was taken from her home (willingly or not, the idea of whisking brides-to-be away was common practice in Ancient Greece) and sent somewhere that she wasn’t so happy to be. She is the embodiment of two worlds – the grace and beauty of springtime flowers and the harsh darkness of death and the Underworld. She is a Queen in Her own right, ruling side by side with Hades as Her doting husband. There is nothing in the myths that I have found that say otherwise, and I view Her as being dutiful to Her husband, Her people, and Her mother. The very fact that a Goddess such as Persephone can so easily embody the dark and light, so easily be a part of both worlds, gives me hope for myself. I don’t have to hide from the darkness but embrace it when necessary. I can be of both worlds and have that balance within myself.

Have you heard the myths of Persephone? Do you relate to Her at all? How do you view Her relationship with Hades?

[1] The Poems of Sappho – Persephone
[2] Ancient History Encyclopedia
[3] Theoi.com – Asphodel and Persephone
[4] Hymn to Persephone
[5] Orpheus – Myths of the World
[6] Rape of Persephone

This is a beautiful exploration of Persephone, @MeganB- She isn’t a deity I’ve worked with much myself, but I know that She has called to several folks here in the forum. I always really enjoy learning about deities, their correspondences, and their personal stories!

About the Rape of Persephone, I remember @Amethyst sharing about a recent book that portrays Persephone in a more positive and empowered light.

I have to agree that I also prefer the legends of female deities who make their own choices, or in dark times, finds ways to make the best of their situation. Perhaps those kinds of dieites resonate with me more, or perhaps it’s just my taste in stories!

Thanks so much for sharing your wisdom, Megan- this was a great read!

Thank you @MeganB these poems really teach me more about who she is. I’m not familiar with her much. I do know who she is and that’s it.

In my opinion it’s in the dual nature of the Goddess (light-dark) that the myth of Persephone teaches us the most.

It helps us understand how the Greek saw the Underworld, and to bring us closer to the idea of death as being equally important as life.

@MeganB Thank you for sharing your take and your personal connection to Persephone!

You’re welcome @christina4 – I think I may explore a deeper relationship with Her eventually. She intrigues me very, very much.

I agree @Francisco that duality is important. There’s a poem written by someone (I can’t remember anymore and it got stolen a lot and never credited to the write author) that perfectly captures the essence of Persephone. She is both Goddess of Spring and Queen of the Underworld. Not one or the other, but both.

Her story is ver interesting, I’ve heard some stories but this gives so much insight.

Persephone is one of the three goddeses I honour alongside Diana and Hecate. I was immediately drawn to her as soon as I learned of her. And I’m more keen on the slightly more positive spin on her story that she wasn’t so much as tricked but went willingly.

I may explore more too. She’s always stuck out to me.

@MeganB I’ve read a little about Persephone in my studies of Hecate, thank you for sharing this so I can learn more.
Blessed Be,
Rowan