Hello everyone! I have a question about deities who like certain flowers as offerings. More specifically, I am asking about Lord Ganesha, as I have learned recently that his favorite flower is hibiscus. Where I live, it’s almost impossible to find fresh hibiscus, but I can find dry ones (I love hibiscus tea), would dry flowers work in this case?

Also, how long should I leave them on the altar after I do my ritual with Lord Ganesha, and what should I do with them afterwards?

Unfortunately they are pretty specific on type of flower and freshness from what I have seen so far:

Everything you need to know about flowers offered to Hindu Deities

Flowers have an important role in Hindu pujas; a ritual is not complete without offering flowers to gods. But we need to know which flowers to offer to

Hope this helps? It’s all about frequencies and energies in these cases. There may be close substitutes you could try to offer and apologise to the deitie for not having his favourite, but doing your best to find a close substitute in your local area of the world as substitute and see how that goes? 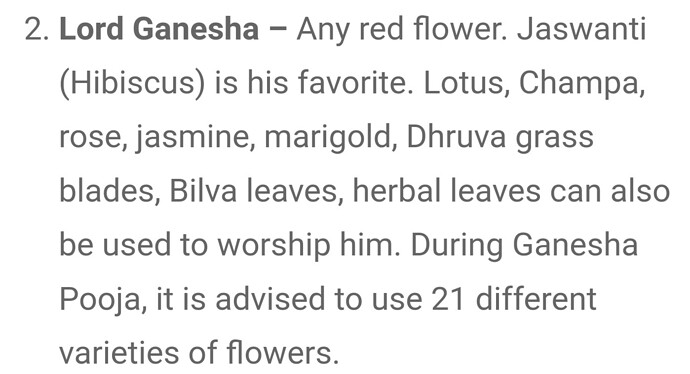 Oh wow I had no idea! Thanks for sharing that article @Temujin_Calidius! I also read that he likes sweet treats like bananas. Should I just go with that then?

That’s a great question- usually I would say that it absolutely fine to offer dried flowers instead of fresh ones.

→ In terms of monetary value, dried flowers (as well as herbs and spices) are more potent than fresh and can often be more expensive.
–>In terms of emotional/spiritual value, I’ve found that almost any offering you give with pure intentions will likely be well received by a deity (although it is true that certain deities like some things more than others!

However @Temujin_Calidius makes a really great point about checking with sources from within that religion around the deity in question. If you are working with a Hindu deity and Hindu resources say that some offerings are acceptable while others are not, I think that is an important thing to consider.

Wishing you the best of luck with your offerings, Peridot! Good luck and blessed be!

I think I will look for other types of offerings. I read on many blogs that he likes bananas quite a lot, so I might use that instead. I am just unsure about how to put them on the altar and how long to keep them there, and also what to do with them/how to dispose of them after the ritual.

I am just unsure about how to put them on the altar and how long to keep them there, and also what to do with them/how to dispose of them after the ritual.

I’m afraid I don’t know enough about offerings to Lord Ganesh to give advice on the specifics, but perhaps @Temujin_Calidius, @Silverbear, or anyone else who works with Him can offer some tips for you?

Wish I could help there. My advise was limited to good old Google techniques

I am just unsure about how to put them on the altar and how long to keep them there, and also what to do with them/how to dispose of them after the ritual.

If you leave food, dispose of it within 24 hours. I typically leave the food out in my back yard for the animals - to me it goes full circle that way - back to Mother Earth. No waste. And it doesn’t even have to be a lot of food. A few slices of banana would work. I would leave 3 slices. – Three is a magickal number. It represents a lot of things… Triple Moon Goddess, Birth, Life, Death, & Past, Present, Future…etc.

If it’s flowers, I tend to do the same thing; leave them outside for Mother Nature to tend to, but leave them a bit longer on the altar…usually 3 days.

@SilverBear thank you so much for clarifying this! And also thanks for mentioning the magic behind the number 3. I keep forgetting, still learning

I guess I can use 3 slices of banana, leave them on my altar overnight and just dispose of them in the morning. Thank you!