Sigils, What to do?

So, I have been reading about on Pinterest, Wattpad (which is a surprisingly good, free source), and other websites and one common thing I’m seeing for witches on a budget or in the broom closet is the use of sigils. I have read that you can make your own but the concept is confusing to me. I want to know do y’all use sigils? If so, do you make your own or do you use sigils from a certain tradition?

Also, Blessed Imbolc to everyone! May the returning of the light bring good energies your way!

Hi there Jayson! Sigils are a very common and cost-effective way to do some spellwork. I actually utilize them in my practice pretty regularly. On my YouTube channel, I have a video explaining two methods for making sigils, as well as a video explaining a few ways you can use sigils. I’ll add them here for you!

Also, if you have any specific questions, let me know!

What @MeganB explains in the videos is exactly what you need to know!

do you make your own or do you use sigils from a certain tradition?

Using already existing symbols can be a very powerful addition to your sigil. It’s also a great way to start when you are stuck or have nothing in mind.

If you have an intention in mind, use a symbol that is associated to that. For example:

Well before Christianity, the fish symbol was known as “the Great Mother,” a pointed oval sign, the “vesica piscis” or Vessel of the Fish, which is also associated with the meaning behind the Triquetra. “Fish” and “womb” were synonymous terms in ancient Greek,“delphos.” Its link to fertility, birth, feminine sexuality and the natural force of women was acknowledged also by the Celts, as well as pagan cultures throughout northern Europe. - Source

The philosophers’ stone was the central symbol of the mystical terminology of alchemy, symbolizing perfection at its finest, enlightenment. It is a legendary alchemical substance capable of turning base metals such as mercury into gold. 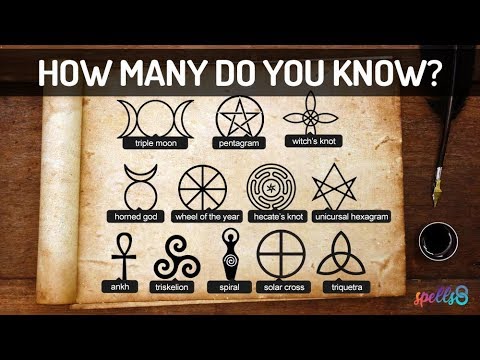 You can also use this website: Symbol Dictionary, as a starting point and then build your sigil from there once you know the approximate meaning of that symbol.

The meaning of a symbol or sigil is subjective and it can change depending on who reads it. This is the way I have been doing it…but your way seems simpler. I suppose this is just like any other thing in this craft… Do what feels right to you?

Hello all!
sorry to jump in like this in a super old post, but I too like @jayson found the internet a messy messy place for informations…
So thanks a lot for the videos @MeganB!

I personally use the method that @SilverBear posted, but for my knowledge the 3x3 grid is supposed to always be arranged with the 5 in the centre, so that the contents of each row, column and the two diagonals added up to 15.
(something like this) or at least this I was taught… is there a reason the numbers in that grid are all scrambled?

What do you mean by scrambled?

… But that wouldn’t be very creative!

My bad, I choose a bad word.

I just wanted to know if I was taught a strict rule that could be bent, or if doesn’t really matter…

I’ve seen that rule applied mostly to Magic squares in math. It’s not necessary for sigil-making.

Sigils are very popular in Chaos Magic for example, and strict rules don’t really apply there. Try different methods and see what works best for you!!

Thank you for posting these as I had questions about sigils also. I just subscribed to your YouTube Channel and I will definitely watch the videos.

@Francisco, thank you for the link to the website! I bookmarked it so I can find it when I need to see what symbols would go with what I am doing.

I love this site for all of the information and help from everyone!

I’ve seen that rule applied mostly to Magic squares in math. It’s not necessary for sigil-making.

THANKS!!! good to know this!

I love this Coven, is so great to be finally able to talk, explain, ask questions and get answers from you guys

Does anyone use the witches Sigil wheel? I’ve never used it but I assume you connect the letters that correspond to your intention, is that right?

Yes. After you cross out letters in your intention you connect the ones that are left.

I’m not even sure I’m ready to try sigils or even runes. I’m just getting used to the tarot and started working with the pendulum. I’m taking these things very slow for me. I’m looking for some good spell guided meditations today. I like the soothing voices in them and I am not ready to try it on my own yet. I know this because I have. I do have a meditation music app and I just found a timer part to it. I think I am going to try that for my intentions with crystals. I made a depression bag the other day and have been carrying it with me. It’ definitely made me feel better the last few days.

I can’t do much for the pain flares, I can’t find my compression gloves, so I am spending time with my daughter and we may find some crafts to do later on, but that requires me driving to the store and I don’t have the energy for getting dressed to go out yet. So maybe I will do some tarot with her first and see if we can come up with something to do that way.

I love rituals with Tarot cards! There’s a book called Everyday Tarot Magic that has a lot of them. For example: I haven’t used the wheel specifically @jill but I created my own out of a spiral instead of a wheel, taking out the vowels like I usually do when making a sigil.