Sacred Symbols: Triquetra & the Power of "3"

One of my favorite symbols! It has a long history and multiple possible meanings: 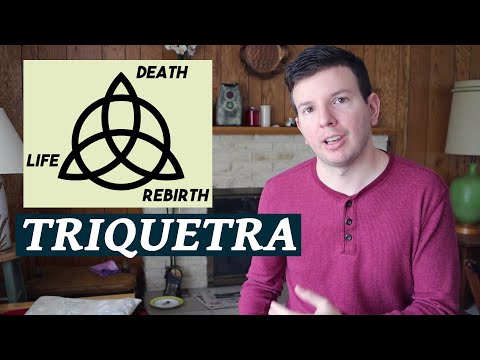 The vesica pisces is a pointed oval figure, a mathematical shape formed by the intersection of two disks with the same radius. Vesica-Piscis-Fish-Geometry595×604 14.9 KB
It was used as an architectural feature and as an aureole enclosing religious figures, also known as “Ichthys” which resembles a fish.

You probably have seen the Triquetra in many different places:

For example, it is used as the centerpiece for the logo of The Institute of Transpersonal Psychology (ITP). The ITP is a school of Jungian Psychology (started by Carl Jung). One of their stated goals is “…to reach the recognition of divinity within”.

In popular culture, The Triquetra is used as the official logo for the TV series “Charmed” where it represents the triple bond and connection between the three sisters in the series. The same symbol was displayed by the rock group Led Zeppelin on their fourth album’s cover. John Paul Jones found it in Rudolph Koch’s Book of Signs, where it is intended to symbolise a person who possesses both confidence and competence.

A Symbol of Celtic Origin

The Celtic culture is full of symbols, and one of the most prominent ones is the Triquetra. Also known as a “Trinity Knot” when parallel doubled-lines are in the graph, the design is used as a religious symbol adapted from ancient Pagan Celtic images by Christianity. It is similar to the valknut, a Norse symbol.

The triquetra is over 5,000 years old, having been used since the bronze age in Europe, and even as far as India. Its name comes from the Latin “triquetrus” which means “three corners”.

In Celtic art, it is usually found as a design element and a part of more complex compositions (such as manuscripts and knotwork), but never by itself. This leads historians to believe that it wasn’t used as a primary symbol of belief.

The symbol has been used in Christian tradition as a sign of the Trinity (Father, Son and Holy Spirit), especially since the Celtic revival of the 19th century. In paganism, it’s hard to identify a precise meaning, but Celtic pagans and neopagans may use the triquetra to symbolise a variety of concepts and mythological figures, usually related to the importance of the number 3: The Triquetra and the Power of Three

The triqueta is not an easy symbol to draw even when it looks simple. It requires concentration and drawing it can become a hypnotic exercise, like a mandala that invokes the power of the number 3.

For some, this can be a spiritual practice that brings protection, healing, Magic. Hence why many witches have the symbol hanging by their front doors or use it as a cover for their Book of Shadows. It can be worn as a taisman, and the TV show Supernatural has made use of the Triquetra as a protection symbol.

The triqueta grants power by connecting the divine trinity that we all carry within. Whatever the chosen trinity may be:

Despite being a symbol associated with the Celtic culture, it has also been found in many other places such as India or in European countries such as Germany, proof of the great power and attraction of this hypnotic symbol.

What energies or feelings come to your mind when you see a Triquetra?

The Triquetra is also one of my favorite symbols, and I attribute it heavily to the Celtic Cosmology of Earth, Sea, and Sky. I actually painted my own a while back and had it hung in my home. It’s in storage right now, but one day I’ll have it hung back up on my wall.