and rituals for Kali

I woke up with two small red spots

on my forehead, one between the eyebrows and another right over my third eye

, where there’s a little indentation… I think I’ve seen markings like that in pictures on people, and it feels somehow significant to me, does anyone recognize them or have any thoughts what they might mean?

Thanks for sharing this experience @CelestiaMoon!

I think what you describe makes a lot of sense. In Hinduism, more specifically in Kundalini Yoga, the external is a reflection of the internal.

This physical sign could very well be a manifestation of exalted perception, without illusion (the third eye opening). However this doesn’t mean that anyone with a mark on their forehead is going through a spiritual enlightenment.

Kundalini is a form of energy and an expression of the Divine Feminine. I suggest that you work with your third eye sight by sitting in meditation, focusing on your heart chakra to spark the flames of divine Love. Then focus on your throat chakra to nurture that divinity with the wisdom of your inner voice. Finally direct that energy to your third eye.

And regarding people with markings on their foreheads, these are usual in Hinduism (religion) and they can be tilak or bindi, there’s more information here.

That’s interesting because I’ve had one for the longest time and my daughter calls it a pimple. And my son just says it’s the witch coming out in me (a wart)

Thank you for a very detailed explanation @Francisco, it feels right to me. I had some very intense moments of connection with people that night, playing with the energies of divine feminine and masculine, Shakti and Shiva, and the energies of the heart and sacral chakras. I still haven’t figured out how exactly Kundalini fits into the picture and if it’s still sleeping soundly at the base of my spine or if I’ve actually got it/her moving in my practices. Kundalini Yoga feels something to try, I’ve actually seen related courses available at our local community college I’d love to give a try.

I love how the expression “as above, so below” applies here too! Our bodies really do keep score, in good and ill. I love how we as a society are becoming more open to the wisdom of our bodies again. It’s not exactly hard to find evidence for it once you do, like just in the simple act of breathing.

I did some research on the position of those two dots, one of them was indeed over my third eye or Ajna chakra, for the second one I found an explanation here

Deities in religions like Hinduism, Jainism and Buddhism are usually depicted wearing a bindi and meditating. In meditation, their eyes are almost closed and the gaze is focussed right between the eyebrows. This spot is called the Bhrumadhya, which is the spot where one focuses one’s sight so that it would help enhance concentration and is marked using the bindi.

Illustrations of Kali also depict her with such a bindi. And we did make some visualizations of becoming one with her. 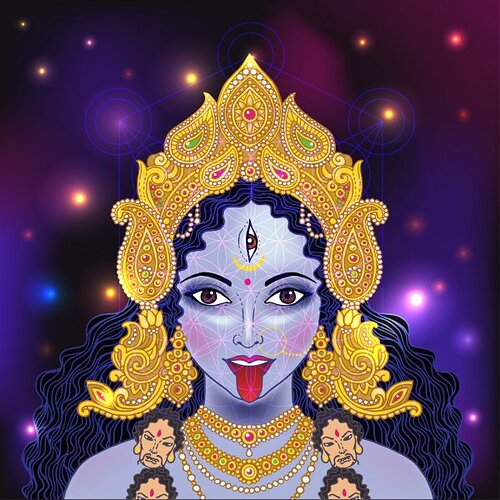 Also I found some practical tips for applying bindi / tilaka: mixing lime juice in turmeric results in bright red paste, and adding something like peppermint oil to it adds a cooling effect that might help with meditation. Definitely something I’m going give a try!

@christina4 Maybe your son is right but not the way he’d expect!