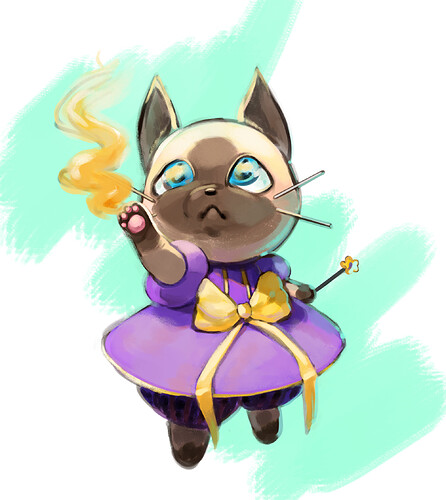 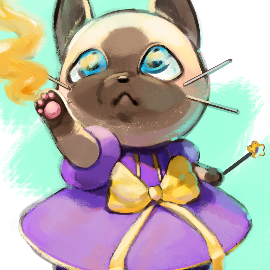 Haven't drawn some kitties in a while! I designed and painted this siamese, I might do a little series on them?

I had my cat make her paw print on my chest and a nice dig on my back. She climbed up me like a tree!!! Ouch

Aww, so cute! I love the eyes!

There is a stray siamese around my house and I couldn’t believe it was on its own without owners with how rare they are and they are my favorite cats I have been giving it food and water just haven’t got room to take it in. All full up on pets

C4- hahaha
Amethyst-I couldn’t resist!
Mr. Jim,
My very old and precious Himalayan was killed, on her own back step, by a loose Pitbull.
After a few weeks, Rich and I went to the shelter to adopt a kitten, which we did. A hysterical long haired white kitten with with a beauty mark just below her nose. She had longish hair and a new scar behind her right ear. I asked her keeper what happened to the kitten and she answered:
“Oh, you mean Frankenkitten?” I was appalled how could they call her that? Talk about mean labeling. I told them I’d take her. Then, I spotted a beautiful Seal Point Siamese in a cage, also very anxious to be out.
“What’s this ones story?”
“Found it wandering in a housing area. We’ve had it 6 weeks and nobody called or came by, so It’s up for adoption.”
Not anymore, I’ll take her too." With all the paperwork of a human adoption, fee’s paid, and agreement that they would spay them before I could take them home (at their expense). Come Monday I went to the vet. He gave me the after care lecture and said he had spayed and neutered them.
“But the SPCA said they were both girls?”
“No.” he told me kindly. “The little white one is a female and the Siamese is male.”
“Well,” says I. “He’s an old boy, we’ll take good care of him in his old age…”
“Old Boy? He’s only about 3.” The Vet corrected me.
SON OF A GUN! He’s gonna out live me!
That’s how I ended up with a boy and girl. We then took our miss sexed children home to name. Naming was easy, she needed a pretty name, thus she became “AmyAnne.” The male, wasn’t so easy. He talk, scolded, tattled and argued, 24/7. Ergo, he became “Maxamus Mouthus, AKA Max.”
AmyAnne grew up to be a lovely long haired princess and Max became my companion. We talk to each other a lot. If he wants out, he talks. If he’s sleeping and I walk into the room, he talks. If he can’t find me, he yowls up and down the hall until I answer him. I scratch his head and then he’s off for another adventure.
The Siamese has more personality than some people. So glad you found each other.

So sorry your earlier fur baby was taken from you in that way, but I’m glad you found yourself two new ones to fill your heart! Sounds like your Max is a talker, I’ve heard Siamese cats are.