So im an abused kid. Well was im 24 now but still haven’t gotten past some of the trama ive been through mainly the sexual trama, so i asked the cards if i will ever be able to be normal. I did a past presint and future lay out. 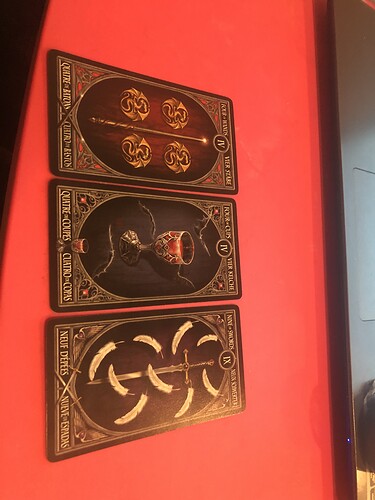 Im still learning tarot so any help in understanding would be nice.

The suit often named Cups is also referred to as Chalices or Hearts. It represents the emotional and psychic aspects of life – fantasy, imagination, feelings, love.

A Four in this suit refers to a restless time, where a person may have become dissatisfied with life, and emotionally uncomfortable. Feeling stagnated, longing for change, the heart ponders its options … as it should.

past: Four of Wands Upright Meaning

This suit, most often called “Wands” and sometimes called “Rods” or “Staves,” represents initiative, ambition, drive and desire. This is the suit of enterprise and risk-taking.

A Four in this suit is the teamwork card, often symbolized by two couples who have come together to create something profitable and enduring. Quite likely, they will create a gift for the future – a business, hospital, theater or university. They represent the founding families of the future community that will grow around their inspiration. Teamwork is the key.

It takes time to build a grand vision; and other people of ambition and talent must be attracted to it for it to fulfill its potential. What we see here is the start-up group, the founding visionaries committing their energies to designing the blueprints and laying the groundwork. This partnership is the prototype for society or any grouping where the whole is greater than the sum of the parts.

The Nine of this suit has a special resonance with the Middle Ages, because it figures the plight of a woman who is alone in the world, during the centuries when women had no personal rights, no ability to inherit property or use the law in their own defense. We generally see her sitting up in bed weeping, grieving and in fear of abandonment because of her vulnerability, wondering what will happen to her now that her protector (father, brother, husband, or son) is gone.

The swords above her head may indicate that the loss has come through some cruel conflict, the outcome of which has left her behind as chattel, the spoils of war. Really what we are looking at is the price of pride, which creates losers as a side effect of glorifying winners. The woman in the picture represents the concerns of the heart, the damage to the soul and to vulnerable ones, when the ego-mind becomes so invested in control and domination that it does not count the human costs. A sensitive, subtle, heartfelt approach to nature (the “feminine”) is trampled and thrown aside in service to a “winner takes all” mentality.

I’ve been in your situation 100% and I’m gonna be 31 this year. Honestly, there’s no such thing as normal in my opinion. Normal is relative to the situation, circumstance, and environment. However, as a mentally ill person, I also relate to wanting to be “normal” or operate in the same manner everyone else does.

As for your reading, I can help out a bit if you’d like.

Past: The Four of Wands in a past position in your spread can represent the dynamic you had in your home life. If everything was stable and you had a good foundation at home, then things were probably generally happy. This could also point to something that you were missing in your past, especially as your reading relates to something you’d like to happen in the future. If you are being influenced by your longing for stability as a child in your past, that might hinder your future growth if you haven’t gotten past the things that have hurt you.

Present: The Four of Cups in the present situation shows a strong disconnect between yourself and your emotions. As someone who suffered abuse, this may be your current coping mechanism. Rather than feeling any pain or discomfort from your past, you’d rather embrace apathy so you don’t have to feel anything at all. It can also point to a desire for more connection, especially if you’re tired of not feeling anything. Maybe your coping mechanisms have become too much and you’re looking for more connection with yourself and the people you care about.

Future: The Nine of Swords is a card that I heavily associate with trauma, especially trauma that we haven’t let go of yet. It is a card of fear and anxiety, the darkness that hides in our shadows. This card is part of a destructive cycle. If you can’t let go and heal from your traumas then the cycle of pain and anxiety will just continue.

Overall, I would say that you probably still have a ways to go with overcoming your trauma, the feelings associated with it, and the process of healing. It’s a long road, and it definitely isn’t one you walk alone. There are many of us even here in the forum who deal with similar issues regularly