Warning there may be triggers here but i ask does Anyone else see the faces in these pictures i took them last night,

Police are following me and sitting outside my house since I made it public the complaint i am filing against them in the death of my wife, last night I was doing my QI DAO Tai Chi Practice out side and my energy center visualization and meditation, police were here watching from out side their vehicle. Until I posted that they were here. I was not worried as I chain and lock the gate when I perform these as I wish no harm on anyone i worry what would happen to someone who crosses my circle to try and force me to stop or threaten me in front of the spirit guests, (pictures are real taken with cell phone and unedited) so I went into protection rituals found in the book Protection and Reversal Magick beyond 101 by Jason Millar during the weekly practice outlined in the book ( I want to add i don’t perform the sphere of Hekas and calling of the Guardians exactly as written in that book, i do not like the language he uses to refer to Dimgali so I researched the ancient Greek races of the guardians learned how to pronounce them in Ancient Greek learned how to speak and read ancient Latin and refer to Hekate by three epithets in Ancient Greek the bestower of all, the Mistress of all, and the Goddess of illumination as i consecrate the sphere 3 times) the and the the pictures with faces in the flames were taken as I asked the spirit world and spirits of my ancestors and my deities for help from the I the other side to ensure My Wife Maureen’s voice is heard for it was an avoidable tragedy. They left (they being the Police) when the chimney shot a 3 foot high flame into the air and began to hiss and spit violently, that is a positive reaction i believe they were letting them know i am not alone… the three foot high flames and fire from old candle wax and citronella oil that is. 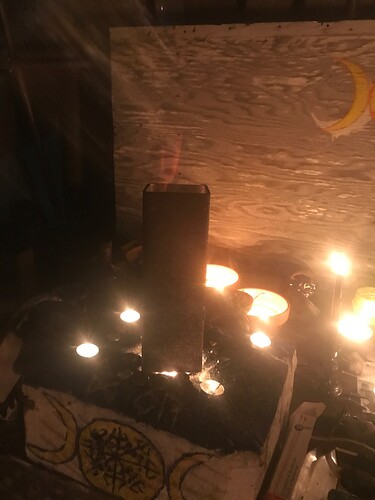 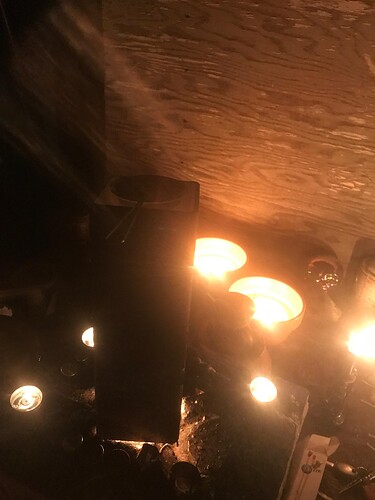 I see a face in the top picture.

@Troy
It did look like a face, but when enlarged & toned down the colors, it appears to be the way the wood is reflected BUT There is a flame coming out of the candle that distorts the shadow. I don’t know what I’m looking at, Troy, but there is something there.
Be blessed, stay safe
and Keep the spirits close
Garnet

I do see what may be a face in the top picture. My hubby, who is non-witchy, was looking over my shoulder and said it’s just the wood grain and smoke making an illusion. I think without being there to know what though felt, I can’t really say one way or the other.

Often when I see spirits or signs from spirits that are meant just for me, if I try to show then to someone else, they don’t see it the same way or see it at all. I saw go with what your intuition is telling you.

Well in that case, it’s definitely something!

there are 2 in the top picture the diagonal lines are not smoke there was no smoke I see I women in the bottom picture. I should mention where I live is a crossroads of three. She is my Guardian and Guide Deity last time i physically saw here i was 18 and a friend convinced me to try mushrooms She came to me in Blue ethereal flame with her hounds at her sides then. This was before i knew her name and what cannot be seen is the selenite athames and these among the many other crystals on the altar 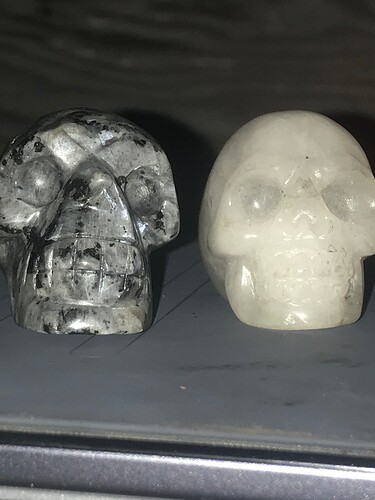 I do see 2 now that you pointed that out. The one with the lines looks like the face is looking down at the other face.

The altar is layers of concrete and plaster of Paris with quartz sand mixed in, also under the chimney it is carved into a triple moon. There is also a 100lbs magnet within the concrete and pieces of my old setup, which are bricks consecrated in the ways of Babylon and Chaldea that were used weekly for two years prior to this set up. i made this so they are set up as they were as pillars labeled b and p and are in the same locations as before just encased in this new altar. 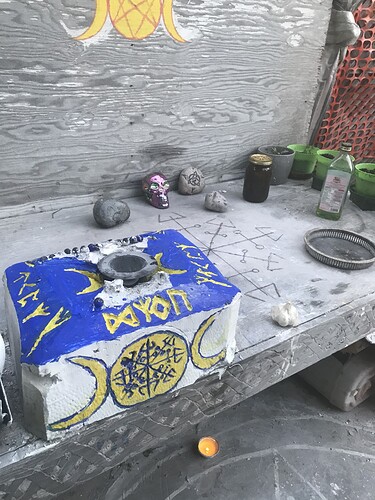 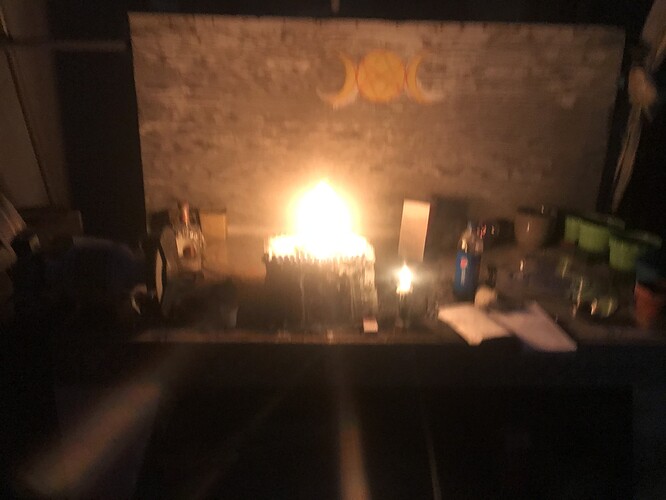 @Troy what i can tell u is that Hekate was with u. U were being given a warning. But as to what i dont know. That is all she will tell me. It is for u to ask her in more depth. (As soon as i opened this thats what she told me before i even read what u wrote or saw your pictures). I too see the face.

Hekate’s warning was about the powerful enemies I have made within the provincial government and the Winnipeg Police, they seek my ruin at any cost. I fought the Provincial Government on behalf of my wife for 20 years. They are always looking for ways to hurt me, as they have made horrendous mistakes throughout the last 20 years which brought them before the media. I was talking to a former crown attorney who told me to be loud and public for my own protection.
The Police Are Angry because I filed a complaint and posted it publicly, It was very tragic what happened to my wife. The Police are responsible as they did not look for her and dismissed her as not worth the resources. As for Hekate she has been around me my whole life many times has she made her presence known. 20 years ago I died in a car crash that left my wife disabled. I left my body and flew into the sun I remember the tree tops as I soared over them. I was met by her and Helios. I was put back here by her as my family needed me alive. She is the keeper of the crossroads, the one who puts souls in and out of life. I know this has she has shown me this, and taught me everything I know. Remember She is a Chthonic Deity that was made dark by the church. The Priests in England Carved her name into the walls of the cathedrals when cursing someone as there is no deity powerful enough to undo anything she does. Even Zeus would not challenge her.
Thank you for your concern