Hmmmmm I have to admit this challenge has me stumped this week. Chaos and I don’t usually get along so I will have to see how to make friends with it for this task!

Thank you for the challenge!

I could not love this more, @Amethyst!! This is so joyful and fun and I am smiling from ear to ear! I can’t even begin to tell you how much I needed this today! Thank you for sharing!!!

Oh, what an interesting concept! I had not heard of servitors before. Reading the wikki on it was interesting and piqued my interest in them for sure! More research is needed on my part!

Glad I could give you a giggle, @BrightBear! I’m sure Betty would count that as an offering!

I pray to Brighid : triquetra: more than before & spend time with Her as I can throughout the day.

For this challenge I decided to write a spell to help rid myself of depressive thought.

I took the words I wanted to use, and made a… thing. I charged an obsidian, amethyst, a citrine, and several quartz crystals in full sun then used them some of my medication.

For chaos magic, I created a simple sigil for my intent of more peaceful days. My day starts at 3:15 am and seems like it never ends. Thats why I chose this intention. 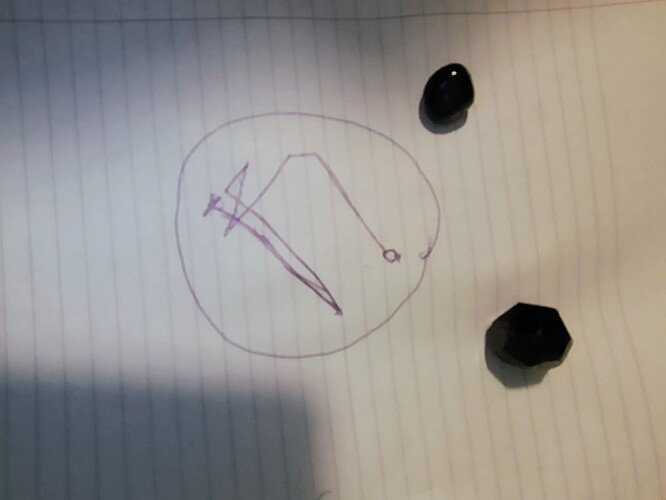 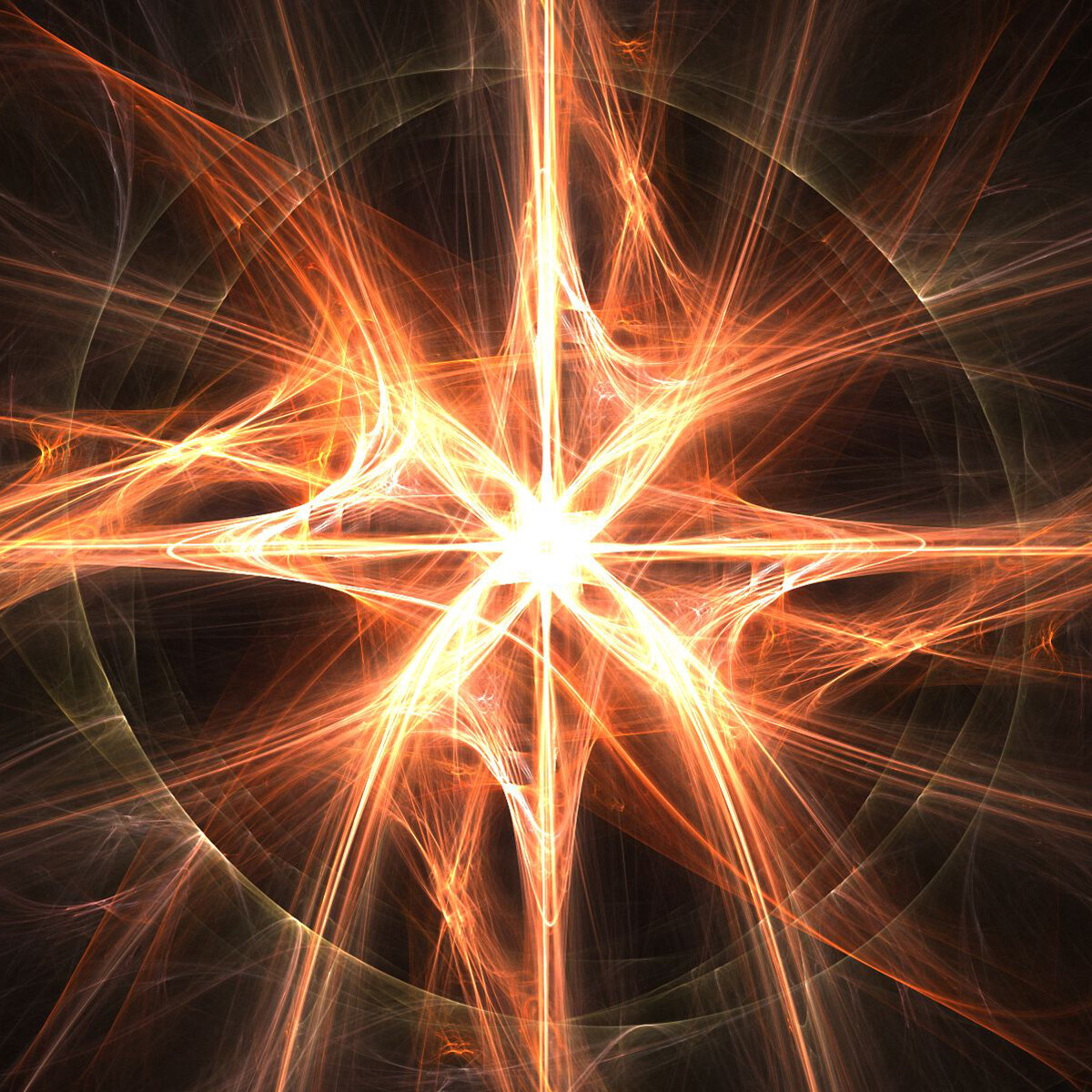 So, what is Chaos Magick? My first thought was, I have no clue! Next, I don’t think I’ll do this challenge…

And today, I decided to do a google search to see what I could find.

“Chaos Magick (also called KAOS or Current 156) is a magickal spirituality with little or no set-in-stone ritual, dogma, deities, or any other object of faith to which the initiate is bound. The chaos magician only places faith in himself.”
Urban Dictionary

“To try something out of the ordinary, out of the box, outside of whatever paradigm within which you normally work, that is chaos magic.”
Learn Religions

“What is chaos magick? Is it a Magic: The Gathering deck? Is this some kind of D&D thing? Sorry, nerds, but this is a different journey of geekery that you’re about to be taken on. The world of chaos magick is part science fiction and part science, with a little bit of Tony Robbins thrown in for good measure.”

“To get into chaos magick, you have to open yourself up to the idea that we’re living in a magical world. That’s not to say that there are wizards and goblins running around casting spells on each other, but by believing in a magical world, you’re admitting the possibility that you can form your own reality with the power of your mind.”
Article by Jacob Shelton on Ranker

Okay, so now I have a less than a basic understanding of Chaos Magick. What am I going to do for the challenge? Still, no clue… I work with light and healing, how does that relate to Chaos Magick?

I couldn’t think of anything, so I moved on to something else. I listened to the April 2022 Energy Update by Lee Harris. After listening, I realized I was feeling so much better, lighter with more energy and my mood was so much happier and the physical pain was gone!!! So, going within is the key to calming the chaos in the world around me, and that feels like Magic!

I noticed that so many people are posting about not sleeping, health and relationship issues, nightmares, depression, etc., that I decided to share the ‘magick’ for my challenge this week. I do hope it helps others to feel better. Here is the link to watch the April 2022 Energy Update with you.

Themes for the month:

(Timestamps included for your easy reference in revisiting individual themes)

Reactions to War in the Collective - Heartbreak, Fear, Anger, Disgust, Horror, Grief among those (Note: There are also those who hold the light and peace without being knocked by the energy - this is good as lightbearers are needed right now). (01:10)

General April Energy Climate - will be stormy - shifts between strong light and lower vibrations (the world stage will mirror this). (8:30)

Light waves are coming in strong in April - stronger than all year so far - this can manifest as incredible periods of light, connection, grace, clarity, healing, higher awareness, and visions. (8:51)

The discomfort of transformation - in the discomfort, we are shedding ourselves. Remember that discomfort accompanies change… (12:07)

Future Emergence Energy is now being seeded - many leaders, wayshowers, and visionaries are rising and emerging like never before. ALSO incubating ‘future’ ways that will emerge in coming years. (12:58)

Relationship healing - In April, a phase of ‘Getting stuck/attached’ to other people’s energies/emotions will take more focus than before. Relationship changes can be natural and mirror the changes in you and the world. (15:28)

There is a continuing General Awakening among people to the systems in our world and how they are operating right now - disclosure of the shadow, and the parts that are not working for the higher good of all. It can be an intense process. (19:42)

The planet is not controllable - her intelligence will speak and rise. (24:28)

Unfortunately our tantra course got rescheduled for the lack of participants, but we had a lovely new moon circle, and we did some pretty chaotic things too, including yelling out our frustrations!

I talked about anger and how good it can feel when it can flow without judgement, how it can feel both purifying and ecstatic when you’re in touch with it. Definitely something Kali has helped me with, and I gave her proper credit. It was very well received, which always warms my heart

I am absolutely intrigued by this! It looks absolutely fascinating! What technique are you using to convert the letters into symbols?

From a book I just picked up, “Awakening to Kali, a Goddess of Radical Transformation” by Sally Kempton…

I was thrilled by the opportunity to tell a story—something I love to do—in such a heightened atmosphere. But when I stood up to speak, I was seized by a feeling much bigger than excitement. It was a kind of ecstasy, a deep pulsing joy that nearly undid me while I tried to form the words of my tale. Later, I would learn to recognize this feeling as one of the characteristic signatures of the Goddess’s presence.

That could be me, writing about the moon circle this dark moon, or the full moon before that. Definitely ecstatic feeling

I talked about Kali and the dark feminine on both nights. I really made an impression, some were in awe, some came to thank me personally afterwards. I had a feeling that I might have been channeling, now I have no doubt. That she’s speaking through me like that… fills me with an absolute sense of awe myself, calm humility, hot ecstasy…

Then that past life experience, temple dancing, priestess training…

Im currently reading a book on kali myself.

I checked out the free sample pages of your book on Kindle but it wasn’t the right book for me in this moment, even though it did teach me how Shakti’s body ended up in 50 pieces (one for each Sanskrit letter, I read from another book). It did prompt me to look for other books on the Mother though and here we are

I have a number cipher which I use to convert each letter to a number from 1 to 26. I use a 3 by 3 grid numbered 1 though 9 to get a symbol for each letter based on the position of each number in the square. Then I layer the symbols for every letter in a word in a way that looks nice.

I didn’t actually end up using the cipher pictured but one I use for making sigils.

Hey some books are not for everyone but as im just learning about mother kali I thought it would be a good interdiction.

I appreciate it, I’m sorry if I came across otherwise

I think what I was trying to say was… I think it’s a good book, I might get back to it another time, right now I’m just being called by another

I didn’t take it that way. I know from experience that sometimes its just not a certain books time yet

I had an interesting chaos magick ritual. I invoked Luqueas and asked him to guide my hand as I drew…without looking. I had a feeling in my body that was in constant movement for a minute and “followed” that movement with a pencil.

I stared at it for a while, completely unsure what Luqueas’s message was ( if there was any at all).
Finally, I decided to draw an oracle card to see if I could find the answer. Balance appeared. 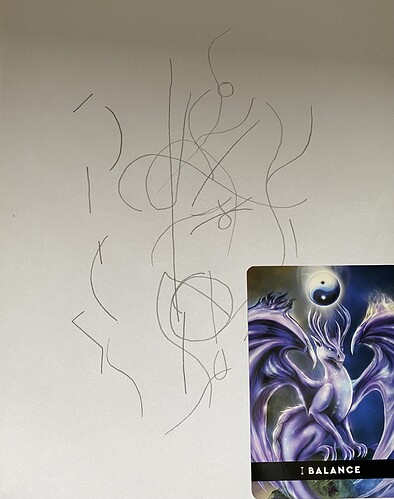 ). Lately, I feel like I’ve been going back and forth in my studies. I’m studying at least three programming languages so I’ll have the skills I’ll need to apply for my dream job.
Problem is, trying to figure out which days I should which language, for how long, and which days to take a break. I think Luqueas was trying to tell me that I need to find that balance.

Interestingly enough, during my ritual, I suddenly began to feel lightheaded, for seemingly no reason. I wasn’t thirsty or hungry, didn’t have an ear infection. Then, it hit me and I had to run to the bathroom with the worst bout of diarrhea I’ve had in years !
It’s likely I caught something since there’s a stomach virus going around. After diffusing peppermint essential oil and drinking some peppermint tea, I’m feeling much better now.

Needless to say, it’s probably going to be a while before I work with Luqueas or chaos Magick again after that…chaotic ending.🫢🤣

For this entry I combined my new moon intentions with some chaotic art magick to create a small sigil charm I can keep with me to remind me of my intentions.
Blessed Be!