After that strong start I kinda have trouble coming up with anything practical… I’m having a very theoretical phase right now, I’m absorbing information, reading books… I guess I could read something about duality and I kinda am, but just that as a challenge entry doesn’t feel very satisfying, you know?

I’ll try to figure something out

Something I’m personally going through, balancing my life between duality and non-duality, cultivating the ego and surrendering it… feeling one with everything is wonderful but so is the endless dance of hot and cold that makes up our experienced reality… I think I’ve surrendered enough of my fear and expectation based attachments that I’m beginning to see how beautiful it all is

Weekly Witchy Challenge: Dual Wielding
For every action, there is a equal and opposite reaction.
Sir Isaac Newton’s third law .
In its most simplistic explanation, this simple statement explains the totality of every thing.

The ever dangerous Fire = South, Summer & Noon
Fire is thought of as the FIRST element. In the category of light & dark, it comes in as light, providing warmth and protection. It is represented by, innocence, physical and personal vulnerability, relationships with others and self, renewal, self-healing, stress, courage, strength, protection.
Fire, is considered masculine (+ traits) Energetic, daring, passionate, enthusiastic, intelligent, (- traits) Resentful, angry, jealous, stubborn, greedy arrogant
Fire holds the power of both creation and destruction, you use this element to kindle warm emotions or ignite the fiery might of a volcano?
Do you see both good (+) and not good (-)?

Then examine Water= West, Autumn & Sunset, Feminine
Personally, I always thought Water was the opposite of Fire. I was wrong.
Water can represent so many things, solid, liquid, mist and steam. It can also be both creative and destructive. It is equated with creation and birth. Emotions, instincts, and the psyche is represented with water. Although not considered as strong as Earth, it can wear away the hardest stone and change the course of huge rivers, so great is its energy. Yet water can sooth us with its sound. It can quench fire as well as run hand and hand about the earth, bubbling and laughing.

Our beloved Earth = North, Winter, Midnight. Feminine
Earth, came to be, under great pressure, exploding like a million atomic bombs. Hurled into what would become the cosmos. Burning, hot as the sun it hurtled thought the newly formed space, until it was pulled into the gravitational pull of our sun. Slowly cooling, the ice that arrived with the earth melted, steamed, evaporated then condensed until the earth became habitable for that spark that was the seed of life. The earth slowed and patiently cooled. Through the creation to extinction of uncounted species, the earth kept turning. In fact the Buddhists had a saying, “ The Ox is slow, but the earth is patient. “
The planet became everything from Pangea to its split into continents. Forests, jungles, deserts, sustaining us, grounding us yet keeping us humble…fires, volcanoes. Tornados, earthquakes, monsoons…Keeps one humble, does it not.

Now for the Capricious AIR = East, Spring, Sunrise, Male
Light, felt but not seen, a force to be reckoned with. It blows warmth to us but also can blow cold. Air wants to know everything, Ideas, imagination, fantasy, Air is creative genius. Motivated, whirling about, tickling leaves.
But it can also be a beast Pushing storms (tornadoes, monsoons), Fanning flames into a frenzy.
Good or bad, the elements have and will always be our savior and our trial in this thing we call life.

This healing is for Kasandra

For you are filled with sorrow and pain of loss…

I call for power and strength to harness this healing

Come forward elements of the Pentagram

For each of you need attention and care.

I speak to the Earth and Mother Goddess,

Man is destroying the world with its greed and neglect.

I plea for a healing to renew the great Earth

For its wounds and scars, from mining and development

Crisscross the land and it screams out in pain.

Earth, you shake in your pain, tremors that turn into quakes.

Trying to shout out its need for surcease.

Let it be so, Mother, Earth heal your wounds.

Remind man the Earth is only on loan

And that we must take care or our children.

Will inherit nothing but a dead planet.

I ask for renewal and that it harm none.

As I have spoken, let it be done.

I speak to the Water and Mother Goddess,

Our animals die for our waters have fouled

From careless neglect and horrid pollution.

Our babes are born wrong and mothers weep.

The fish and herds decline every week.

The crops are failing and people starve.

Renew the water, I know it will be hard.,

Filter your precious water and make a stand

Calm your rage and give man a chance.

I can’t promise perfection, but the will to try.

Because if we do nothing, everything will die.

If it harms no one, let this be so

As I have asked, please don’t say no

As above, so below

I speak to the Air and Mother Goddess,

Element of Air you are enraged and I understand why,

They have insulted you with smoke and exhaust fumes.

The ozone has thinned, the air warms & the ice melts.

Although it is the circle of life, it is still felt.

Let your zephyr’s blow away strife.

Calm your storms and let there be peace

So with the Mothers help our covenant we’ll keep.

And it harm none and no tears to weep

As I have spoken, so let it be.

I speak to Fire and Mother Goddess,

Incendio you destroy forest and fields

But you allow renewal as the land heals.

And with each fire, you cleanse and purify.

Great flame of the World I ask you

To help heal the land that you do guard.

Calm your volcanoes and the internal fires.

With you, the circle of life will continue.

And it harm none, so mote it be!

For my entry of this challenge, I’ve been shadow working in a journal I had from earlier this year that I only used but one page. I’d say that it wasn’t easy the least bit! I do however feel better with the issues I chose to work on. There are still some that I’m not quite ready to chip at yet. There’s a right time for everything, right?

I couldn’t find an author or a creator just a link that says, " for more content from the creator of this journal head to … Than there’s a link. But this is the cover: 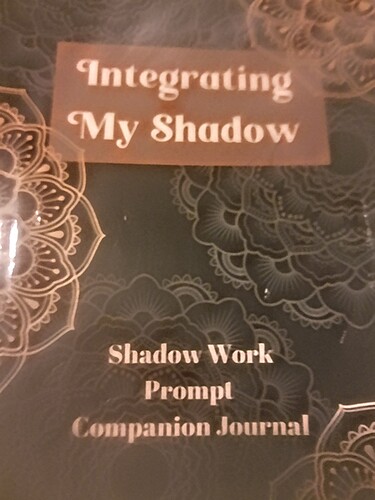 I have to say, I took a nice chunk out of this journal!!! It’s prompted so it makes it easier to do.

Thanks to @TheTravelWitch_Bry for putting this challenge together because I would have left the book to sit some more. This was a challenge that I thought I’d miss.

Hiya @TheTravelWitch_Bry, please let me know if I linked my post correctly.

This one is a real, well, challenge ! So are you up for the task?

Remember that the only way to lose is give up before you start, so why not go ahead and give it try!

I was going to give up after the first 2 hours and your above quote was rolling around in my head.

@Jewitch thank you for your inspiration to “distill” my challenge. What you write about “awareness of balance” is exactly what I need to hear at the moment.

@debra2 YOU are my opposite!

@jessica72 what an inspiration!

looking forward to learning about Krampus. Living and learning and loving it.

@NoName what a brilliant topic choice, Love and Hate.

@CelestiaMoon you just blew my mind with your list of dualities.

@Garnet I am very moved by your post. Thank you.

@christina4 I really like the idea of prompt for shadow work. I can get a wee bit overwhelmed and I think the prompts would anchor me and help me focus. Good going!

@janis Thank you! And your fire and water crystal grids look amazing!

Thank you. It was hard but I’m still working on it.

Janis, I totally agree. I was ready to pound
my head against the wall, but…you know?
Too embarrassing. So I used the top of my desk. LOL.
What I did was read my Forum mail and found
a person in such need that I cried for them.
My task was set, put to paper and sent.
Good luck and be blessed.
Garnet

KRAMPUS! Yes! I cannot wait to see what you come up with.

looking forward to learning about Krampus. Living and learning and loving it.

It’ll be interesting, that’s for sure!

KRAMPUS! Yes! I cannot wait to see what you come up with.

Is there’s a polite way of saying please switch all the spoilt butts out there and leave the rest of us alone? In rhyme that is? That’s what I’m struggling with right now. Getting the right words out and not sound like a butt myself. LOL!

Thank you @janis that is cool

I didn’t realize that are

You’re a Weaver of Words and a Wrangler of Rhymes, @Amethyst. Im sure you’ll come up with a wonderful verse, and by the way you…a butt…NEVER! Lol!

That’s a very freeing thing to be able to set aside fear and the weight of expectations and just… appreciate the beauty that is there. Good for you, Celestia Moon!

And those are all great additions of dual forces- thanks for sharing the list! Perhaps a bit part of working with duality is just that- taking the time to stop and examine the dual forces out there and how they shape our lives

Fire and water, earth and air- bravo to Garnet for taking on not just one, but two combos of opposing forces!

And you brought them all together in such a beautiful healing prayer- this is really stunning, Garnet. I’m always amazed by your talents! Thanks so much for sharing this heartfelt masterpiece

This was a challenge that I thought I’d miss.

It was indeed a tough one- I’m very proud of you for giving it a try, Christina!

It is a tricky challenge and shadow work can be brutal, so really good job for giving it a go. I’m glad you feel better about the issues you were working on- congrats to you on a job well done!

I was going to give up after the first 2 hours and your above quote was rolling around in my head.

I hesitated about including that line (I wanted to encourage folks without pushing too hard, you know?) but I’m really glad that I added it if it helped you, Janis!

You did a great job with your work exploring fire and water in the crystal grids. Thanks again for sharing your beautiful dual wielding magick!

a Weaver of Words and a Wrangler of Rhymes

Well that is a really cool title

It’s very much appreciated! Thank you!

You’re a Weaver of Words and a Wrangler of Rhymes, @Amethyst. Im sure you’ll come up with a wonderful verse, and by the way you…a butt…NEVER! Lol!

I’ve been a butt more often than not, sad to say. I just don’t try to be. LOL.