I have heard a little about witches ladders recently and wondered if anyone had anymore info on them? What sort of spells do you cast with them, how do you do it? Do you decorate your ladder? Is there an order to how you tie your knots? Etc.

Crafting a witch’s ladder is a way to cast a spell, just like making a jar or drawing a sigil.

They can be used with a specific goal in mind, or simply for meditation, as a healing ritual or a protection amulet.

The first recorded witch ladder found was in an old house in Somerset, England. It was basically a rope with feathers woven into it. You can keep reading about it here: http://england.prm.ox.ac.uk/englishness-witchs-ladder.html

How do Witch’s Ladders Work?

Charms are knotted or braided with specific magical intention into the cords. The number of knots and nature of charms varies with the intended effect.

It is essentially a type of knot magic. At the tying of the last knot, all the energy is directed into the cord and its knots, with a final visualization of the object of the work. The power has been raised and is now ‘stored’ in these knots in the cord.

Witch’s ladders can be used to bind certain energy to use for later. For example for extra strength, patience, or comfort at times. Those energies are stored and when the knots are released, so is the needed energy.

You could even store your anger or frustration on it during difficult times.

How to Make a Witch’s Ladder

I know @roxanne has made one recently, she wrote a topic on it. This article also has some interesting information and a guide: What in the World is a Witch's Ladder?

The witch's ladder is a magical tool that has been around for a while. Use it in spellwork, meditation, or for any other sort of ritual working.

And here’s a Youtube video on how to make one: 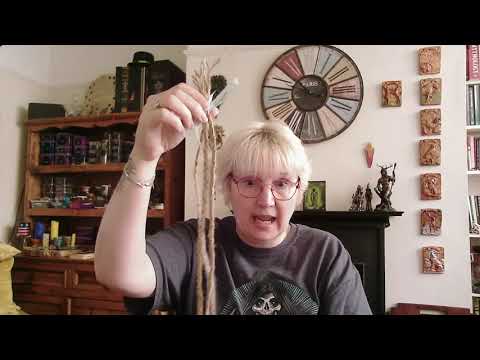 I have since added to it and completed it

Fabulous thank you so much @Francisco!!

@roxanne yours is so pretty

I have made. Witches ladder out of shell to protection my rat studio. I used the shell as they hold a strong bond for me to the ocean.

Ooh! This is what I did with a ribbon! I don’t know much about knot magic but I found the witches ladder rather lovely looking. Rather than hanging it I wrapped it around a spell jar.

Never heard of it, before!

This is so interesting @Francisco. Thank you for the information…

What a great idea! I’m always finding feathers whenever I walk anywhere. And it looks lovely!

This is really interesting- I don’t know much about knot magic! Although I have heard of a knot ceremony during bonding ceremonies (kind of like marriage between partners) where some pagan practices use Handfasting. I would consider this to be a kind of knot magic! I believe handfasting comes from Celtic traditions and the ceremony looks really beautiful. I am considering doing something similar with my partner, as neither of us want a traditional marriage in a church. This looks like meaningful and beautiful ceremony!

Limeberry, I like the idea of using a witch’s ladder around a spell jar. Very creative!
I need to make one of these for healing. So much sickness in the world right now.

My nephew and his bride included it in their ceremony… it is beautiful and deeply significant.

I like to do the jar spells, but adding a witch’s ladder seems so much more binding to the spell! I think I am going to look into this more and maybe add them to my jars when I do spell work or rituals!

Got my witches ladder supplies this weekend, going to create a couple this week.

Ohhh good luck, @Tamera! You’ve got some gorgeous colors there- I would love to see a picture of your witches’ ladder when it’s complete!

Ooh yay! After adding that one to the jar spell you wrote the other day it just felt so right! I’ve been thinking its how I’m going to be finishing off my jars now too! Teamworrrrkkkkk

Well I finally finished my witches ladder…that is going to my son for him to hang in his home.

It is a very thoughtful gift- may it watch over and bring many blessings for your son!

By knot one the spell has begun.

By knot three so mote it be.

Cool stuff. Thanks for all the information Fancisco. And congratulations on successful completion of your ladder Tamera.

I’ve read about covens passing the rope around the circle and different members tying knots and each member adding their own influence to the ladder as a whole. I think even with just two people this would make for a great spell. Not saying its not good alone too of course. So far I’ve done all of my spells alone.