Would it be wrong to use a fetus skull?

Ive been looking at bones to add to my altar and i found a fetus human skull id like to add is it wrong to use human bones?

Was that on the Internet? Like on Etsy? Can we see? 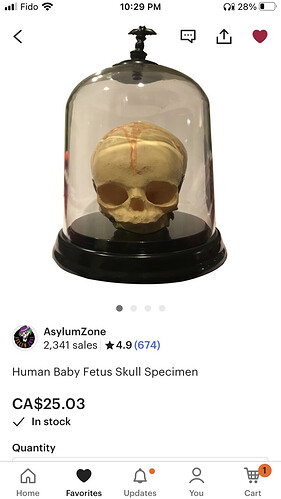 Not sure if its even real but I thought it would look cool on my altar.

I doubt it’s real for that price. If animal skulls are expensive and legal, why would a ‘real’ fetus be $25? It’s probably resin or whatever they re-create bones with. I’m saying this out of an opinion, I don’t have any true knowledge with human bones!!! Had to say that!

I looked it up and it’s just a plastic replica sold as a Halloween decoration. If you want it on your altar, why not, you know? 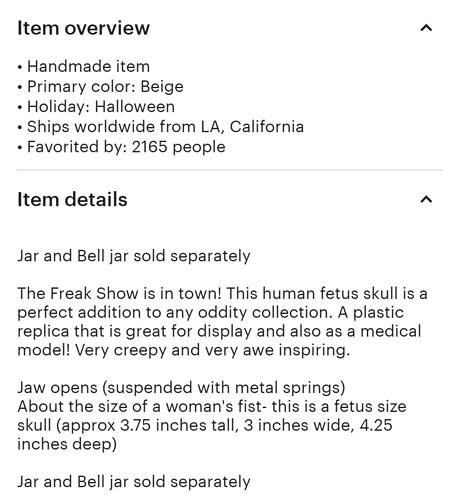 I agree with what Megan said. Maybe it will raise some eyebrows if anyone sees it, but what goes on your personal altar is completely up to you. Having said that, an altar is a sacred space and you may want to ask yourself what makes this piece “sacred” to you, or what symbolism/meaning it has. In other words, what does it spark in you? Answering these questions will help you avoid cluttering your altar and then having to throw stuff away.

Well i figured a skull would have symbolic meaning to kali ma but i do have a skull bracelet that would probably work better symbolicly as she wears a necklace of skulls im hoping to have something symbolicly linked to each of my deities i work with. Im getting a raven statue for the morrigan , black dogs for hekate and a snake for lilith im just kinda stuck on representation for kali

So, my comment is not about this frankly fake thing, but more to your question of using actual human remains. There are many ways to work with Kali that do not involve the use of human remains, including some lovely tapestries and posters that are widely available and cost next to nothing. You could meditate, learn about her or offer her traditional offerings (and those are not bones of any kind; and animal sacrifice was done away with in the Hindu religion more than ten centuries ago). I am going to go on a limb and say that most people would find the suggestion of magickal use of actual human remains as distasteful at best and abhorrent at worst, and have the value that human remains not used for scientific purposes should be handled respectfully, because as a society, most of us act in a way that we would like ourselves and loved ones to be treated, dead or alive. Even if you did not personally ascribe to this value, you are risking some seriously bad karma and you might even incur the wrath of the Goddess herself.

okay that is some good advice, im learning what i can about kali but as she is a newer adition to my devine i work with i still have alot to learn about her its not like lilith and hekate and the morrigan who ive worked with for a couple years now. so i know very little about kali but i just feel a pull towards her much like i had with the others and am just kinda following the pull and i in no way want to make her angry with me

There’s a alchemical skull made of resin with markings on Savanna’s webpage if interested. Nice for a alter decoration.

You can use this Kali yantra symbol of her and meditate, while learning about her. Things you can add representing her is a trident