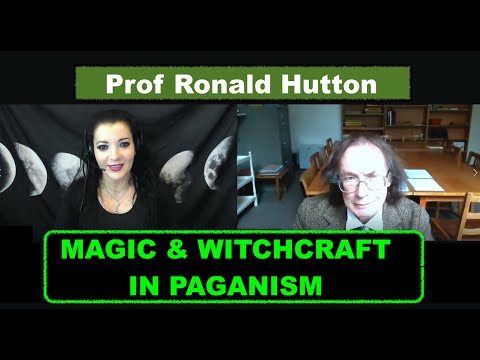 Doctor Angela Puca dropped an awesome interview with Professor Ronald Hutton. The following information was pulled from the description of the video to whet your appetite. Editing in this: Enjoy the hour!

So much good information from two experts in their fields.

Very cool! I’ll have to watch this when I have more time. Thank you!

Awesome! Thank you for sharing!

You put me on to Angela!!! I can’t thank you enough! Shapes very good at what she does! I didn’t see this one though. I’ll watch it in a few. Thanks for adding the times.

I’ll have to add this to my watch later list. Ronald Hutton has so many books that I want

I’m sure he is a wealth of information, too!

This was such a great interview! Thanks for sharing it @praecog29!

I made some annotations for those who don’t have enough time to watch the video right now.

Difference between Magic and Witchcraft:

There isn’t a big difference in terms of what Magicians and Witches do, as they can operate in the same way. However Witchcraft is far more likely to be blended with pagan religions or traditions such as Wicca. Ceremonial Magic is not connected with deities or gods. In many ways, Ceremonial Magic is completely divorced from any religious systems.

"Witch" is a term with at least four possible definitions:

They all are used together and interconnect with each other.

Why is Magic/Witchcraft so feared?

Ancient Greeks and Egyptians didn’t like witches because it empowered individuals in a way that may have been contrary to the common benefit. In the Christian theology, witchcraft manipulates the laws of nature and is contrary to God’s will and perceived as demonic. Modern rationalists interpret witchcraft as slipping back into the dark ages. So Magic is not widely accepted in the modern age because of these three conceptions.

Is Magic a religion?

Yes and no. It can be a religion and it can exist outside of a religion. It’s better to see Magic and religion as separate.

The emphasis on result-oriented Magic has become more prevalent but working with powers greater than yourself is the thrill in being a pagan.