Beyond my pay grade

I know ya’ll can help me as you always do…and thank
you for that!
My husband and I live in an old house. Several people have passed away in it, to include his 1st wife (passed 2006).

We’ve never had issues and actually have been happily coexisting with them for years. UNTIL…a few months ago.

It started around the time we cleaned out the attic and came accross his deceased wife’s Wiccan tools, Tarot cards, books, crystals, etc. We packed it neatly for his daughter to take …nothing disrespectful was done to her things. We all grew up together so her memory is alive and well in this home. I didn’t touch her things out of respect…this was where she and TJ (my husband of 2 years) raised thier children and this is still her home.
since then…Someone or something is trying to either h
urt, scare, or just irritate my husband now
trying to type this and my laptop is messing up suddently…as one example. Ive seen the lights and microwave got haywire, phones drain super fast or stop working for no reason, tv channels change…lots of craxyiness
but he seems to have orbs of light following him. we can see it on our cameras

Ive done cleansing banishing and home blessings. Hes having nightmares and physical reactions to thiis. Can anyone help

Now of course it could just be a series of coincidences, depending how old the wiring is, the electrical may need to be replaced, But if not, and you suspect otherwise, with your electrical going haywire, nightmares, and cleanses you’ve done not working, it sounds like an avenging spirit of some type, and it’s targeting your partner. He may have done something or is in the process of doing something (it may not even be that serious), but he is the culprit of some sort. How to deal with it if so, for yourself, set your boundaries around you however you do it (some ppl visualize an energy field around them, or amulets, shield, etc), so it will not interfere with your space.

Now for your electronics, try keeping a piece of black tourmaline next them. I’ve read that black tourmaline works well on dissipating negative energies from electronics. Sounded like a good idea, so I kept a piece next to my wifi router and after a couple of months, it formed holes in it, so there was some sort of physical reaction.

Oh dear, that sounds like scary stuff, @susan8- I think anyone would be worried! Eliza shared some good advice, so I’ll just add to that with a few thoughts of my own for you to consider.

It started around the time we cleaned out the attic and came accross his deceased wife’s Wiccan tools, Tarot cards, books, crystals, etc.

If you are sure that the strange happenings are related to the tools being discovered and moved, then you have the cause right there

However, I wouldn’t say that the identity of the perpetrator is clear just yet- while it could indeed be the spirit of your husband’s ex-wife, when it comes to spiritual tools, a world of other possibilities open up (literally!). Was there a Ouija or Spirit Board among the tools? Were any of the items related to familiars, deities, or other otherworldly beings?

While it could be that your husband’s ex-wife is unhappy with their things being moved (whether it’s how they were moved, who and where they went, or simply that they are no longer in the house), I think it is equally likely that some other kind of spirit or being had an attachment to the tools and is not happy with the situation.

Getting rid of any problem begins with first knowing as much as you can about the issue at hand. I would recommend working some Divination to try and learn more about the situation, or- if you feel safe and comfortable doing so- reaching out to the spirit and trying to communicate with them

Alternatively, if you do not feel safe or comfortable and simply want the presence to be gone, you could explore Banishing & Self-Defense Spells to be rid of them and protect your space

Whatever you choose to do, I am wishing you all the best, Susan! I hope you can resolve the situation and reclaim your peace at home. Blessed be!

Getting rid of any problem begins with first knowing as much as you can about the issue at hand.

Something worth definitely looking into.

I’ve seen this on Ghost Adventures! They usually bring in a priest and they use sage a lot.
Since it seemed to start with taking the tools out of the house, try bringing them back in your house to see if that calms things.
I’m with @TheTravelWitch_Bry opinion on it too though. She has great ideas.
If the sage doesn’t work, look into using holy water around the house.

Oh, wow1 It does sound like you have something going on! My friend, Laine, is a medium and she wrote a DIY book on this! It’s $5 if you have a Kindle. She told me what to do and it worked for my former house!

If you try this, let me know if it worked!

Thanks for the reply. Yeah, we put the tools in a box for his daughter…whenever she’s ready for them… and they’re still in the attic…just boxed up differently. I’m going to have him put them back because he keeps seeing things…lik out of the corner of his eye etd. and I’m NOT one to jump to the conlusions of ghosts, aliens, bigfoot etc. I obviously belive in spirits etc but its not my go to for whats going on in my daily life…but this time,…I’m definately leaning towards it. I’ve seen the orb thing on TV before, and I’m a HUGE skeptic. Ive done sage cleanse, Palo santo, Threshold blessings/protection, etc. I"m not being effected at all and he’s definately a skeptic too when it coumes to the supernatural . Too many people make it something its not, exagerate or outright lie etc so we’re both level headed in that dept. IDK what’s going on. I’ve never experienced this before.

Thanks for the response. I put out the tourmaline. I’ve always kept Amythist, quartz, and hematite by our bed too. It;s a very strange thing and, like I posted in another reply, both of us are very careful about jumping to conclusions, etc. I did Palo Santo and sage cleanse again and I did another threshold protection/blessing too

Thanks for the response. We have done some cleansing etc. I replied to the post but it goes under one name insead of the entire thread. I just didn’t want you to think I didn’t appreciate your time.

And no worries at all- I know it’s a bit tricky! There’s actually a few ways to talk to multiple people within one post, and all of them are explained in the Easy Guide for Multiple Replies. Feel free to check it out!

I hope the tourmaline, cleansing, and perhaps moving the tools back to where they were can help solve whatever is going on. Wishing you all the best- good luck and blessed be!

Glad you decided to not jump to conclusions. I feel that’s the best approach, and if anything there is a saying ignore it it will go away.

For the black tourmaline, I went looking for my piece that I used, saw a hole on each end, thought it was two separate holes, but no it’s one hole that runs through (didn’t notice it then, but now that I looked at it more closely), here is an imagine. I recall having it near the router and modem for a couple or few months, this was last year.

You can see my counter through it. I have kept this piece for about 10 years, so it wasn’t there before I put it near my router and modem. 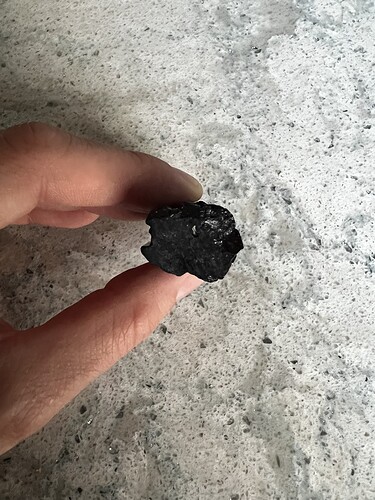 I got the black Tourmaline and it helped with the electronics. This week my husband has been super emotional and last night he came in from the garage with a tool in his hand… He was visibly shaken. He said he’d looked for it for 20 years and yesterday it was right there on the work bench.
Then I had an epiphany. While his 1st wife was Wiccan, he stayed away from it out of fear. But with me he’s curious and dipping his toe into the waters. Could his newfound belief is allowing him to see what has always been present? Maybe the orbs etc aren’t threatening but just finally being revealed? Is that a thing?

Aside from all the rational and naturally occurring reasons for this activity, such as 5G internet which can slow then speed up on occasion, if it were an entity, could it be trying to warn you both? Maybe there’s a latent, unobvious, but potentially dangerous problem with the wiring…There was a movie with Demi Moore, where her dead son was taunting her horrifically and nightmarishly. Well, it ended up being that scaring her was the only way he could lovingly warn her of the future danger.
In other words, could something be trying to help?
Maybe your husband needs a complete physical checkup as many health issues, cardiac, endocrine, etc, can cause nightmares, night sweats, etc.

Could his newfound belief is allowing him to see what has always been present? Maybe the orbs etc aren’t threatening but just finally being revealed? Is that a thing?

I mean, that’s very possible. I’m wondering if maybe you’ve got a house spirit that is now happy that your husband is acknowledging the possibility of their presence and is bringing them gifts?

I was definitely leaning a lot more towards what your husband was dealing with to not be negative, but something he needed to deal with. But for yourself, establish your own boundaries.

Sounds enough time has passed, situation has settled. It may be the same entity from before or not. This entity, feel you or your husband don’t need to worry. Sounds like the entity wants to stay in your home, so making an offering of some sort. Ultimately, it is your home, you allow who or what in it or not, you have the authority to evict whatever it is that you do not want.

If you decide to, it’s important to always establish boundaries when dealing other entities. Some ideas for boundaries, a designate spot in your home where you hardly shuffle through, allow the space for the being to be, some of them like shaded areas. If you do plan to visit or shuffle through the area, remember to give the entity a heads up a day in advance. That’s it, for the most part, just set it and forget it. The being will hardly interfere, they do move around (you will not notice) but they room where they rest. Then after that, don’t recommend trying to channel or disturb the being purposely. If the being feels to do something for you, it will at its pace.