I will have to admit, @TheTravelWitch_Bry wasn’t kidding, this was more of a challenge than I expected. I did find something that I knew about, but never really focused on it before because I used other correspondence items. After learning about these though, I think I will be more conscious of the energies that I am working with & how they are balanced in my workings. I’ll start with the simple explanations for the forces that I decided to learn about & incorporate for this week’s challenge.

Passive energy, the unconscious mind, emotions, feminine energy is letting go & being able to flow with the events as they unfold while taking it all in at the same time. Think of it as the way the ocean ebbs & flows with fluid motion.

Since deciding on my initial approach to this challenge, as many know, I have also started learning about runes. Specifically the Elder Futhark. I decided that for me to learn the runes I would use a combination of techniques. I have a rune journal that I downloaded from Etsy that has history, uses, spreads, along with other information, but for each rune there are 2 pages for what the meanings, correspondences, & what you noticed about how the rune is a part of your reality. I do not work with the Norse Pantheon, but as part of these runes history, it’s important to understand their meanings & contexts. So when I am writing about them, I leave out deity associations for myself & use the overall meaning or correspondences.

I have been drawing 1 rune a day from my black velvet pouch that came with them. I stir them up a little & blow into the bag. I hold it closed & mix the runes. I then state that I would like to have a general idea of my day. There have been a couple of times where I have drawn the same rune on 2 different days. I had 1 day where I had another rune decide it really needed to be heard from too.

However, I came to be working with that rune, each day they have been runes of protection, balance, chaos ending & a fresh, new beginning. The balance of mental & emotional, physical & spiritual. Since I had started to feel this way a couple of days ago, I was also doing meditations related to the rune & the resonating meanings. Mental can be attributed to Male energy & Emotional can be attributed to Female energy. The same associations can be made for physical & spiritual.

The last 2 days, they have been very positive & guiding me towards a physical & spiritual balance has been achieved with new lessons to be learned going forward. I will be seeing the fruits of my labor in the coming weeks.

As a final push that my transformation has come to conclusion for this part of my path, I drew the rune: 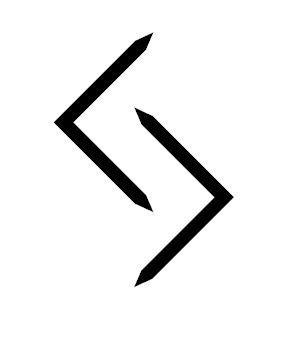 Today’s meditation seemed very fitting for the 2nd part of my entry. I did the, Meditation for Mental Balance & Grounding through Yoga with Adrienne on YouTube

& I felt very calm & balanced, for lack of a better word. A genuine content feeling & much lighter energy around me.

(There is a lot of shrouded history as to whether the Celts ever used these types of runes as Germanic tribes migrated & settled whether due to a union or taking over when the Celts & Germanic tribes were in close relation to each other. Celtic history, traditions were mostly passed down verbally. It was monks & other supporters of Christianity recording what they knew & their impressions on the Celts (aka Keltoi). My next learnings will be more related to the Ogham alphabet & then similarities & differences with how they were used & learning about the Ogham Staves)

Thank you for sharing your studies, rituals, and awesome insights, @Siofra_Strega! You’ve opened up a healthier more balanced way of viewing Male/Female Energy.

What an amazing idea. The amount of work that you have put into this challenge has blown me away. I think that its fantastic that you incorporated working with runes. I really like the combination of the divine female and masculine energies. I will really need to look into incorporating these into my work, especially balancing letting go with charging forward. Thank you for sharing so much incredible information.

You are very welcome! & a big Thank you!

I have been on this learning & reading all the things I can get my hands on right now.

Mostly books but there are some good websites too. I like to hear different schools of thought on things & be able to formulate what works with my practice. Presently I am really connecting with these runes that I have been working with, so that feels really good too.

That was amazing @Siofra_Strega you put a lot of thought and work into your challenge. Thank you for all that you’ve put into it.

This one was indeed a challenging theme- but it was no match for you, @Siofra_Strega, you overcame this challenge beautifully!

Great work exploring the meanings of masculine and feminine energies in your practice. It looks like your hard work and research helped you to combine these energies with your rune studies and find a new path to balance

Thanks so much for sharing your findings!

Thank you @TheTravelWitch_Bry, it definitely made me really think & look at how to use them & balance them within myself. It definitely came at the right time to coincide with my rune studies & the balance that I am working on right now.

I really agree with you there!! @Siofra_Strega is on a roll, and I love it!!!