High John The Conqueror Root is the most well know and famous of all Hoodoo roots.

It is said, that if you carry a root with you at all times it will help you remove and conqueror all obstacles in your path.

You can also carry this root in a green satchel for good luck, drawing money and to have power over other.

(power over others takes away free will. So, I caution you when contemplating this type of work, it can go wrong, quickly.)

If you use the oil to anoint yourself, it is said to attract lovers.

If you use the oil in a courtroom, its said to have influences over the judge and jury.

I use High John the Conqueror oil to anoint candles!

In this video I used the oil for protection and added protective herbs to the mix for a double whammy. 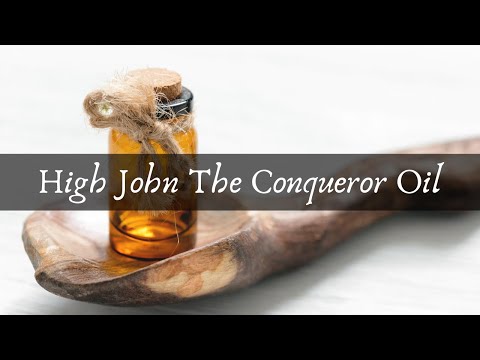 I found this folklore story too -

According to African-American folklore, High John the Conqueror was the son of an African king in the Congo, sold into American slavery.

Folklore tells us that John, also known as John de Conquer, fell in love with the Devil’s daughter Lilith. For John to win the daughter’s hand in marriage, the Devil challenged him to plow 60 acres in half a day, and sow the acres in the second half of the day. Lilith gave John a magical axe and plow to complete the task but also admitted - the Devil meant to kill John even if he did complete the task. Wiley and clever, John stole the Devil’s horse, and he and Lilith both fled, it was said that they shape-shifted in order to escape.

In the stories, John and Lilith returned to Africa, both agreeing to never again use their powers so the Devil would not be able to find them. But John left his powers in America in the root of a southern plant, Ipomoea jalapa or Ipomoea purga, a powerful plant species introduced by the American Indians. John the Conqueror Root is now a staple of African-American folk magic.

One only has to possess the root of the plant John the Conqueror, and John de Conquer’s powers of luck, love and success can be yours. Now the most famous root in the world, High John the Conqueror Root symbolizes enduring courage, success and laughter. Used externally in the practice (internally it is a powerful laxative

), the root can be carried as a talisman or can be incorporated into other charms and spells.

Thanks for sharing this recipe! And the interesting history and associations of the root!

Would you recommend using High John the Conqueror oil for ceremonial baths as well?

It would be wonderful for that purpose. If you are a business owner, it’s been said that you can dab some on the money in your wallet or cash register.

High John the Conqueror root is also known to protect people from evil spirits and it will keep your house cleansed and protected from negative energies.

It is a very powerful root/oil and can be used for many good things!

It would be wonderful for that purpose. If you are a business owner, it’s been said that you can dab some on the money in your wallet or cash register.

Thank you so much for sharing the information, your lovely recipe, and the history of High John the Conqueror! I love legends and stories like this- it was a very interesting read!