There are so many different areas to cover when dealing with the history of Magick. I must say though that there is one thing that arouses me about Magick and that is the charms and talismans that accompany the craft.

The word talisman comes from French talisman , and which comes from the ancient Greek telesma (τέλεσμα), meaning “completion, religious rite, payment”, ultimately from the verb teleō (τελέω), “I complete, perform a rite”.
More about Taliman

Where there is Talismans there are also amulets that plays it part in Magick today. An amulet , also known as a good luck charm, is an object believed to confer protection upon its possessor. The word “amulet” comes from the Latin word amuletum, which Pliny’s Natural History describes as “an object that protects a person from trouble”. More about Amulets 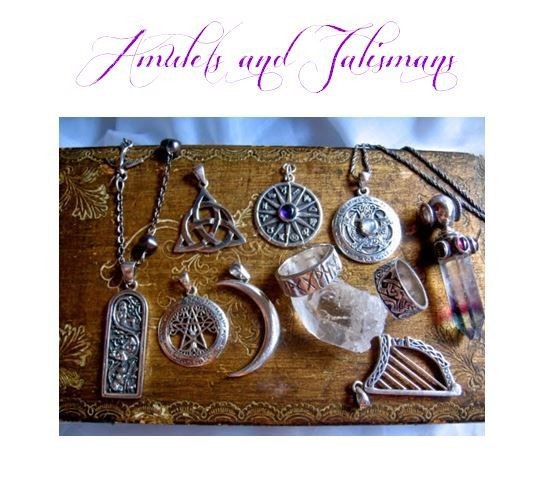 Since 7,000 B.C.E., Mesopotamians, Sumerians, Egyptians, Greeks, Chinese, and Romans have all imbued lapis lazuli with potency, including divinity, royalty, and luck.

These were no the less mostly favored by pharaohs, the stone—carved into thousands of amulets and sacred objects—offered treasured protection en route to the afterlife. 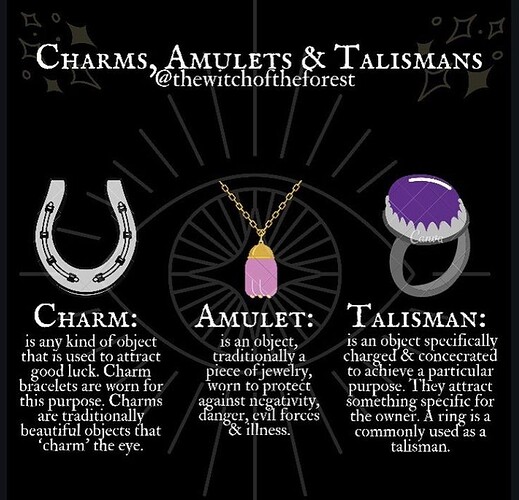 These magickal item can be made from almost anything based on the practitioner’s favor of choice and intentions. Objects that are given to you also make good charms, because of the pleasant connotations they provide. (Richard Webster) qouted because of this you will be harnessing the powers of the universe to attract what you want, and to repel what you don’t want. Use them for good, and create the life you deserve.

This is a great bit of history, thank you!

Hooray for exploring charms and talismans!

This is a wonderful area of witchy history to jump into, @NickWick- thanks so much for sharing your findings!

That’s a a nice distinction between charms, amulets, and talismans- I know I’m guilty of sometimes using the terms interchangeably

Reading this makes me want to go out and collect some new treasures!

Thanks again and blessed be!

Ooh, I was hoping someone would do this topic!!! It kinda goes along with my topic that I wrote. You did a wonderful job!!!

@NickWick Thanks for this, I’ve always mixed up which one is which. Its amazing how much power a seemingly simple object can have. And I like wearing things that most people are unaware of what its doing even when they see it, its a nice confidence boost for me. Although its always disappointing when I lose one or misplace one or your meditation beads break and fly all over the place, lol. I try not to get too attached to anything because I know they are always temporary for me.

Its amazing how much power a seemingly simple object can have.

It is real powerful indeed and amazing along with a little of your intentions can have on a given object, this can be such a magickal experience.

This is a wonderful area of witchy history to jump into, @NickWick- thanks so much for sharing your findings!

collecting some new treasures sounds even better to me.

I was hoping someone would do this topic!!!

Thank you for ýour encouraging words C4, happy I did this topic. I could imagine what sexy charms, talisman and amulets you would come up with using crystals.

I always wanted to know the difference between those 3. Thanks for sharing!