History of the Aura and My Research

As with a lot of things in the occult, when I study them I tend to go for history and discovery first. This post probably won’t contain information on how to see auras but more of the history, discovery, and ideas behind auras.

Where does the aura come from?

I’ll be honest. As I’m writing this, I’ve been researching auras for the last hour trying to get to the bottom of the first mention of auras themselves. It appears that auras come from Indian teachings, so maybe Annesha can help out there, but what I’m finding is a lot of convoluted Eastern mysticism written and changed to fit Western standards. I mean, that’s not surprising to me, but it makes things extremely difficult to research and understand. So, I’ll start with what I’ve been able to find out. 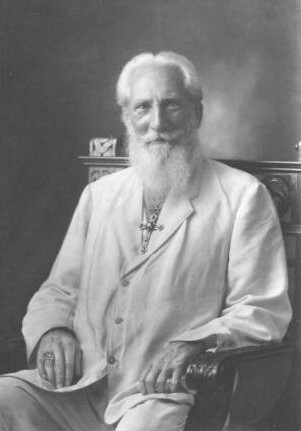 According to Wikipedia, the first mention of the supernatural aura in the Western world was from a man named Charles Leadbeater. A Biographical Study of Charles Webster Leadbeater written by Gregory Tillet in 1986 details some of Charles’s claims and life.

Among the writing on auras, Charles Leadbeater also gave lectures on " ‘Theosophy and the Higher Criticism’, ‘Theosophic Christianity’ and ‘Steps to First-hand Knowledge’, a subject which must have given his listeners the hope that he would reveal the secrets of his clairvoyance, enabling them to engage in astral exploring, the investigations of past lives and the probing of the atom." In these lectures, the listeners were reminded that he process was long and difficult, “the precise details of which Leadbeater was sworn not to reveal.” (Tillet, p. 232)

Though I can’t seem to find the first mention of auras in Leadbeater’s work, he does have an entire section on auras and their colors in his book, Man Visible and Invisible, published in 1903.

So then, what exactly is an aura?

As I said before, I can’t find a specific tie to Leadbeater’s writing on what an aura is. However, I have not read the entire book (Man Visible and Invisible) so I can’t say for sure that it isn’t there.

An aura as we understand it today in a New Age sense is an energetic body that every person and object contains. The aura is said to change color depending on the mood or emotions that we’re experiencing. If I am understanding the writing correctly, Leadbeater equates the aura with the astral body.

It must be understood that all these bodies occupy the same space, and interpenetrate one another; so that in looking clairvoyantly at the savage we should observer his physical body surrounded by a luminous ovoid mist, but that mist would present to us the appearance of Plate V., Plate VI., or Plate VII., according to the type of clairvoyance which we employed. Using our own astral senses, we should see his astral body only, and should learn from that what passions or emotions or sensations he was at the moment experiencing, and to which of these he was in the habit of yielding himself frequently. (Man Visible and Invisible, pg. 76) 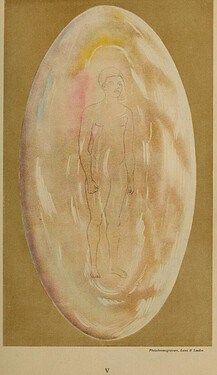 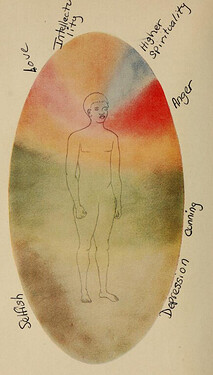 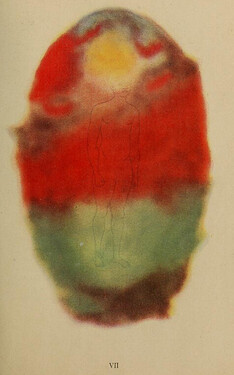 Leadbeater goes on to say that auras change and or nowhere near permanent. “Its colours, its brilliancy, the rate of its pulsations, are all changing from moment to moment. An outburst of anger will charge the whole astral body with deep-red flashes on a black ground…” (pg. 77)

Auras and Their Colors According to Leadbeater

Now I don’t know much about how auras are seen today or what their colors are. I do know that you can get aura photography done to see your aura in the moment, and that would be something cool to do. I wanted to share some of Leadbeater’s meanings behind aura colors, all of which can be found in his book Man Visible and Invisible in chapter 13.

Black – Thick black clouds in the astral body indicate hatred and malice. When a person unhappily gives way to a fit of passionate anger, the terrible thought-forms of hate may generally be seen floating in his aura like coils of heavy, poisonous smoke.

Red – Deep-red flashes, usually on a black ground, show anger; and this will be more or less tinged with brown as there is more or less of direct selfishness in the type of anger. What is soemtimes called “noble indignation” on behalf of some one oppressed or injured may express itself in flashes of brilliant scarlet on the ordinary background of the aura. Lurid, snaguinary red - a color which is quite unmistakeable, though not easy to describe - indicates sensuality.

Brown – Dull brown-red, almost rust-color, shows avarice; and it usually arranges itself in parallel bars across the astral body, giving a very curious appearance. Dull, hard brown-grey signifies selfishness, and is unfortunatley on eof the very commonest colors in the astral body.

Grey – Heavy leaden grey expresses deep depression, and where this is habitual its appearance is sometimes indescribably gloomy and saddening. This colour also has the curious characteristic of arranging itself in parallel lines, as has that of avarice, and both give the impression that their unfortunate victim is imprisoned within a kind of astral cage.
Livid grey, a most hideous and frightful hue, shows fear.

Green – No colour has more varied signification than this, and it requires some study to interpret it correctly. Most of its manifesta- tions indicate a kind of adaptability, at first evil and deceitful, but eventually good and sympathetic.

Blue. — Dark, clear blue usually indicates religious feeling, but this also varies immensely according to the type of the feeling, its purity or bigotry, its selfishness or nobility. It is liable to be tinted by almost any of the qualities previously mentioned, so that we may have any shade from indigo on one side and rich deep violet on the other, down to a muddy grey- blue which is at the level of the African’s fetish- worship. The tinge of love or fear, of deceit or of pride, may mingle with the hue of religion, and thus there is a wide range of variation observable.

Light blue, such as ultramarine or cobalt, shows devotion to a noble spiritual ideal, and gradually rises to a luminous lilac-blue, which indicates the higher spirituality, and is usually accompanied by sparkling golden stars, repre- senting elevated spiritual aspirations.

My Thoughts on Auras

I guess I don’t really have any immediate thoughts on auras. They don’t really play a part in my practice and I have no desire or need to see what my aura would look like. However, all this research into the history of auras has been an interesting experience and, even though auras aren’t my thing, I’m happy I took the time to dig into it a bit and learn what I can. It just goes to show that you can learn about something without implementing it into your practice!

Thank you for your hard work and research on auras, even though you don’t work with them!!! It’s interesting to see different meanings for the colors and how far the information has come.

Thank you for posting this exciting topic @MeganB. I definitely learned something today. I have never worked with auras before, however it was very interesting reading up on this research as well as the colours of correspondences.

What wonderful research! You really got into it, which is a good thing.

Very refreshing topic! Thanks for sharing, @MeganB! It’s always a good idea to start with the history to see where each thing comes from.

I liked your down-to-earth approach. There has been some talk of auras from a psychological perspective too. Here’s a study from 2012 that links seeing auras to having synesthesia, which seems convincing to me from a more scientific point of view.

Thanks for diving deep into history, @MeganB- I really enjoy how you took a scholarly approach to explore the spread of auras and their usage over time!

It sounds like there is still a bit of mystery around when auras entered practice. It reminds me a bit of the somewhat mysterious history of tarot

Really interesting to read about- thank you so much for this post, Megan!