I have had a relationship with my source who is Mighty Hecate. She is the mother of Witchcraft, magic, and ghost. Zeus gives her the power over land, sea, and the starry sky. Hecate is Anima Mundi the soul of the world. She has the powers of the sacred 7 which is connected to the land sea and sky which corresponds with the earth, water, and air. She also is a torch bearer who has her torches, so she embodies fire as well. Goddess of passion and desire. She is the Goddess at the crossroads so another words she is going to protect you when you’re at the crossroads. It’s what she does for example when she looks for Persephone in the underworld, Persephone was at the crossroads. She protects and so do her dogs!! They will eat you alive if you mess with her or her loved ones.

One of the reasons why she is a light Goddess, and this is my opinion, I don’t care what anyone says: if you think she is a dark mother, fine think that! But I think she can light things on fire or put them out! She has that power. She is also a Titan who signifies strength and power. Our beloved Hecate is powerful, and she is one with many faces. This is another reason why I feel so drawn to her. She is the cousin of Apollon and Artemis and the great goddess Phobia. Hecate resembles Persephone because they are both goddesses of the underworld. Persephone is the Queen of the underworld who at first does not want to be there but is forced to stay because she eats a pomegranate that was poisoned. Hecate helps Demeter and watches over Persephone. She puts on her mother archetype. I have been called to Hecate because I had some mommy issues like not having my real mom. I had my adopted mother and she came as close as it gets to being a mom. However, I had some deep-rooted issues. Not feeling loved during some parts of my life and I ate the Pomegrante like Persephone. I resonate with the mom archetype and a dark mother!

I always seem to thrive for a friend to take on a role of the mother archetype. I don’t have this problem anymore, but I have seen a lot of women trying to help me and take on that role. Besides all that my love for Hecate has grown and as you all know I had issues being a mom too, so I think this is one reason why she picked me! I had her in my dreams We can all see how when something horrible happens to our kids we can call on her cause she loves kids, and she can be a very protective mother. After all my kid was shot and I was the crazy mom like Demeter! All I wanted was him to be safe. She is the kind of mother you don’t want to mess with. Hecate is angry to find out that Persephone was tricked into eating a poisoned pomegranate that would keep her in hell for a decade. I could just imagine what that was like being Hecate in the underworld looking for Persephone and just wanting aid to her because she knew she was in trouble. I want to aid my son as he is a herion addict! She shows up as a mother archetype in the story she watches over her, but she can only do so much she’s in hell. My kid is like Persephone

Persephone eats the pomegranate, and, in a sense, I feel like Persephone. I was mad to cause I ate out of the poisonous tree, and I felt cheated and betrayed that I ate that pomegranate! Society wanted me to fit in their little bubble and I didn’t so know I have been calling on my dark side to help me get right with the light side. I did all I could to be better! I even got a criminal justice degree! Anyway Let’s back it up here, at first, I wanted to eat that pomegranate but them later I realized I had no one to blame but myself for my mistakes. Hecate comes in and helps me when I am at my worst! She is a Moon Goddess who always carries a torch and is a very passionate about helping me find my way!
what I did to honor Hecate was made a Wheel of the Year to honor her and her epithets!

I know that we are in the waxing moon and I needed to work on something that would help me grow so I decided to work on making a good start for the new year coming! 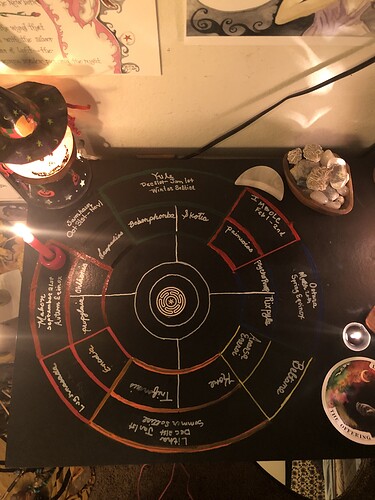 image3024×4032 2.56 MB
qz5hzgae7NpmqFBxEZrufRkWM.jpeg)
Here is my Wheel of the year and her epithets and the wiccan calendar 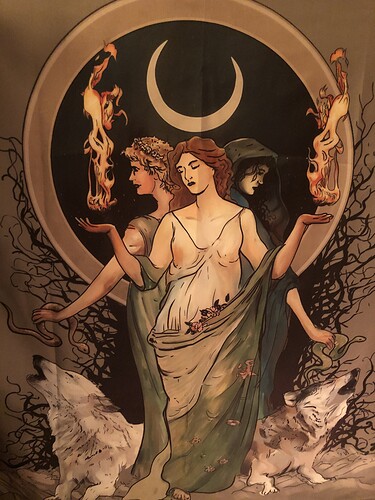 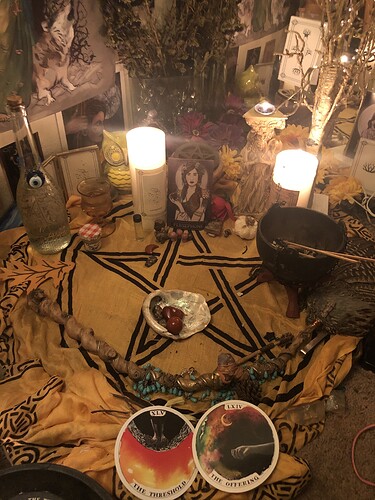 Beautifully written, @Jeannie1- I can see how you connect with both the gentle and caring aspects of Hekate as well as Her fierce maternal power. She is clearly as very special deity in your practice!

Thank you for this entry, Jeannie, Blessed be!

Beautiful wheel of the year, and Tapestry @Jeannie1 .
Thank you for sharing!

@Jeannie1 Your devotion to and love for Hekate is truly an inspiration! Very beautiful altar as well

Thank you for sharing such a lovely insight to your practice

Wonderfully written @Jeannie1 and thank you for sharing, I love your wheel of the year and tapestry.

Valen,
Thank you that truly touched my heart, and I have learned so much about myself! I see we can live the stories of mythology, and we see ourselves in the story of the Gods and Godesses. I definitely feel Hecates Archetype in my life. Funny thing is that I didn’t even have any witches in my blood. I just love

the archetype of the Witch! I feel a simple comfort that comes from burning sage! Lighting a candle and being able to connect to my highersel and the theGod and Goddesses!
Jeannie

Aw that warms my heart u like it Debra thank you for your love and interest!
Jeannie

Beautiful altar and artwork! I can see the dedication on your devotional work and it’s so inspiring

Thank you so much for sharing this with us, Jeannie!!

@Jeannie1 beautiful. I really like it all. Well done

Francisco,
I am glad to share, the key to my success, is know thyself!

I heard it somewhere in not sure who said it but I believe!
I think I’ll add some more to the calendar!
I am going to doodle Sigils and pagan symbols! Like my next step is drawing a snake, and a triple moon to honor her through out the year.
Many blessings to you Francisco, and thank you for your kind words!
Jeannie

Crystal,
I appreciate your kindness and support thanks so much! I hope to be more supportive Like u!
Thank you very much!
Jeannie