My Entry for the Weekly Witchy CHALLENGE - Magick on the Go!

For my entry to this week’s Weekly Witchy Challenge I decided to make a little spell jar that’s portable and can be carried with me wherever I go. I have had a little jar with a cork stopper around for a while now and I thought this was the perfect use for it! Here’s what I did.

I modified the spell / chant / incantation from @SilverBear 's protection spell in order to correspond to the herbs I was using, since I didn’t have a few of the ingredients she used.

I tried to find a spell using a combination of protective herbs that I had around, and I was able to find a Pin for this easy recipe. I used salt, a piece of a dried cinnamon stick, rosemary, and ground cloves.

To bless / consecrate the jar itself I followed along with the video here (this was my first time doing that process! As I set up the elemental representations in their proper spots I got a chill down my spine! Loved that

). I wrote “protect me” on a piece of pretty note paper that I have and placed that inside.

I don’t have any small crystal chips for this purpose, and I didn’t want to put a whole quartz crystal in there and seal it away forever, lol! So I got a little creative with representation:

I have these little sticky gems that were clear and emulated rhinestones, and in my mind they were a good representation of clear quartz. I would utilize the real thing to give the spell, and my intentions, a little boost. But this will have to do!

I also placed some beads inside that are black and orange. I chose them according to this chart I found. They represent protection and warding off negative energies (the black), and general success and legal justice (the orange), since my partner is currently involved in a court case that has encountered endless delays and difficulty, and his opponent has taken to attacking me and my character in order to try and make us both look bad, and win favour with the judge on their side. I’ve been wanting to do a banishing spell to ward off some psychic attacks and do a “return to sender” spell but I can’t quite find the right things and the phases of the moon never seem to align with the evenings that I have the time to complete them. So until then, this will have to do

And finally! Here is the jar itself. Below that is a link to a little video where I turn it around to better show you the contents. That was taken prior to sealing. 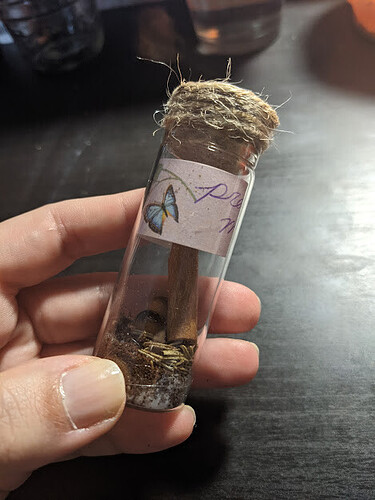 And bless you for being so forthcoming and open with your magickal processes. So appreciated!

Great entry for this challenge, @Eliza_Beth your jar looks powerful

Here’s a chant for justice from Buckland’s Complete Book of Witchcraft.

Lord and Lady hear me pray, judge and jury rule my way

Wishing you and your partner the best outcome! Blessings!

Thank you so much @Francisco !! I will definitely be using that chant!

It’s lovely!!! I like the idea of protection on the go!!!

Ohhh look at that beauty!

Your spell jar came out lovely, @Eliza_Beth- you did a really gorgeous job with it! May it protect you everywhere you go, near and far, home and away!

Thanks so much for sharing- blessed be!

Thank you for the prompt, @TheTravelWitch ! Blessed be

You’re very welcome, @Eliza_Beth! Many blessings back to you