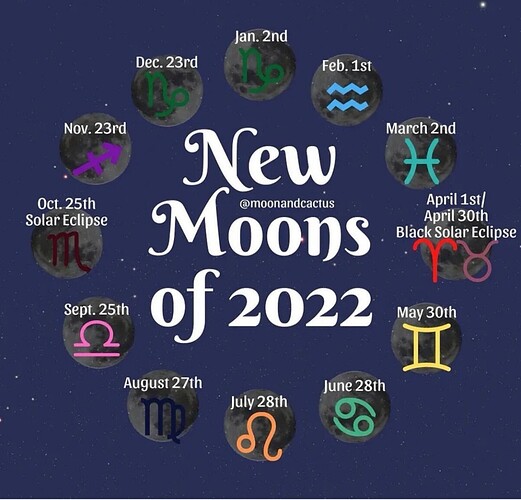 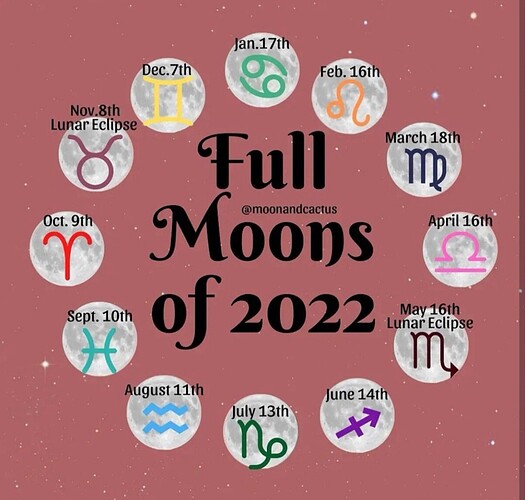 Thank you for sharing, this part of the year is moving right along so far.

It took me a second to realize how close 2022 really is to right now.

Thanks for sharing this @Abs53

I had to do a double-take on “Black Solar Eclipse”. I’m guessing they mean i’ts a solar eclipse on the New Moon, but all solar eclipses happen on a new moon (the sun is directly behind the moon). I’m not sure what they meant.

@Siofra Agreed! I hope you’re having a good start of November!

Thank you @Abs53 for sharing. I’m printing as I type…

@Abs53 thanks for the info

Bookmarked! Oh this is awesome information- it’s really helpful to have both the New and Full Moon signs all in one spot. Thanks so much for sharing, @Abs53!

I love these posts!! Thank you @Abs53

@Francisco I thought the same! Solar on a new moon, lunar on a full moon right?

I guess they just put the eclipse in and thought the moon phases were a given, or there wasn’t enough room on the pic to write both

Just a note for clarification:

On the new moon chart, it shows April 1 / April 30 black solar eclipse. There is only 1 solar eclipse (April 30). I’m assuming they listed it as a “black” solar eclipse because a black moon is when you have 2 new moons in a month or an extra new moon in a season (the third new moon out of four in a season between the solstice and the equinox… I think that’s how the seasonal variation works, someone please correct me if I’m wrong. It’s been awhile since I took astronomy in college…) It’s the counterpart for full moons and blue moons.

Thanks for sharing @Abs53

Thanks for sharing this @Abs53 going to put this in my BOS so I have them close to me, and know what is taking place in the Moon for 2022.

I’m a Sagittarius, so this month is special for me

Thank you for sharing this…

Thank you so much as I’m one of those who is organized and ready! Blessed be!