So I did a variety of things for this Challengebut given that I was doing protection spell work I decided to start with a cleansing bath and then smudged my home with white sage and yerba.
I then got one of the arms from Simon (my other aloe plant) since he’s bigger than Alvin and I hung a piece over the front door, back door and one over my bedroom door alongside the bundle of 3 witch burrs that I keep there to ward negativity though I grow aloe plants in my home because according to the spells8 Lesson on aloe growing it in the home protects the people that live there from accidents and because I’m legally blind in one eye I need all the help I can get.

But this seems too simple so I then decided to make a faerie protection spell jar to protect me from the trickery of the less friendly fae. 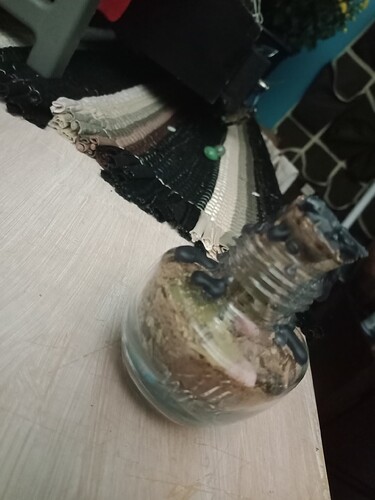 I cleansed my jar with smoke from a sage citrus incense stick and then added my salt first for a solid protective foundation and then my stones and then herbs. I did this while burning a black candle inscribed with my protection sigil from the bay leaves and sealed the jar with the black wax

But as I was finishing up I thought about the fact that we’ve had a handyman here at the house fixing things for the last week and how his energy has been draining me and somehow getting past my protective shield I put up when I have to be around people I’m not used to because I’m still learning to harness and control my empathic gifts. So I decided i would make a small empath protection amulet to carry in my pocket as an extra layer Of protection. 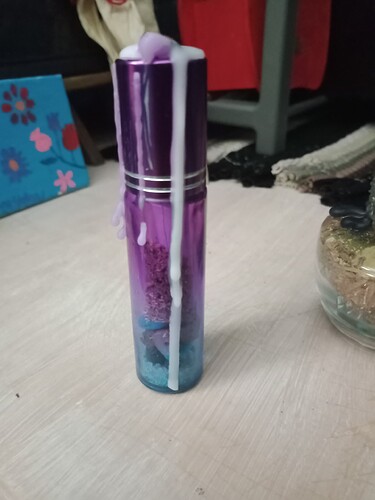 And then I placed a sigil paper in the jar before sealing it with a purple and a white candle which were burning as I repeated “I am protected from the negative energy of others. I do not take on the emotions of others as my own. No one can pop my bubble unless I allow it.” And then let the candles burn out beside the jar

Whoa. You knocked this one out of the park! Great job!

Thank you @Amethyst I don’t believe in doing things half way. Go big or go home!

You really did wonderfully with all this protective work- may your lovely magick protect you and your home! I particularly love the faery protection jar- what a fun idea! Keep any troublesome tricksters away

Thanks so much for sharing your talents and recipes!

I have been reading post and comments from you @phoenix_dawn, and asked to my self; is it the same phoenix_dawn?
You been true lot in life, also grown in your practice. More confident, focus and centered. You’re a blessing to the community.
Blessed Be!

) and I’ve been catching glimpses of bright light in the corners of my vision but they disappear when I try to turn and look at them so I feel like I may have stirred up a few pranksters so i remembered pinning the fairy protection jar a while back and thought it was perfect for this challenge. So far I’ve just caught the flashes of light on my table near where the jar is placed. The theory is that the fairies that are fooling around will be intrigued by the contents of the jar and will try to investigate it and become stuck inside but the one thing that was not mentioned is how long can they stay in there and when/how to release them. In the little research I’ve done on the fae the fact that stands out in my mind is the fae like to be free and do not like being captured. I most definitely do not want to offend or anger the fae as I have seriously considered trying to work with them some in the future.

@pedros10 Thank you so much for saying that. I’m definitely changing for the better and emerging from my cocoon day by day. I owe it mostly to the infinite roots coven though because there are so many gifted and supportive wonderful witches here and every day I learn so many things. I’ve had to split my B.o.S into multiple books already and the main binder I use is so full that the rings are separating from the binding

ever since I became a witch I have definitely gained more self confidence, my Outlook is so much more of a glass half full type and I’m so much more in tune with the earth, my intuition and my ability to harness my empathic abilities is slowly getting better. Not to mention the increase in my thirst for knowledge. I spend a great deal of time reading and taking page after page of notes and I’m nearly finished with the second level of courses here on spells8. Lately I’ve been a little gloomy because I was feeling like all the changes and transforming wasn’t being noticed by other people. You are the second person on the forum to mention it though so it’s obviously noticed and I am so proud that two of the people that I respect and care about have noticed it. You really just made my whole day

You’re welcome, my dear! You did a great job!

I don’t believe in doing things half way. Go big or go home!

I definitely agree with you @phoenix_dawn. You did well on this entry

In the little research I’ve done on the fae the fact that stands out in my mind is the fae like to be free and do not like being captured.

That makes sense to me

If the spell instructions didn’t mention that part, then I’d wait until you are no longer seeing lights around the jar and then bring it far away (similar to what you would do with disposing spell remains) and then let them free on the condition that they don’t come back to bother you.

Although I love learning about them, I don’t work with any Fae and can’t give any personal advice about working with them. But I know that many folklores and legends warn about making deals or agreements of any kind with the Fae. So if you take this option, I’d recommend going about it carefully.

Beautiful! I liked how you did many protective entries!