Reading Tarot(Struggling to begin to understand)

So I feel I have issues really grasping the concept of tarot, while I dont have all the cards memorized I struggle with putting meaning to the cards I draw that pertain to the questions I ask, in order to really begin understanding tarot on a deeper level and being able to interpret the cards in a well rounded manner, what steps should I take to get fluent at reading and understanding them more? any and all advice will be greatly appreciated

First things first- set any bad feelings or guilt aside. Know that tarot is an extremely complex art that takes years of studying and practice. And as we can see from looking back at old tarot books, it is constantly evolving and changing with the times! It may be said that one can never truly 100% master the cards and all of their interlocked, ever-changing, situationally-dependant meanings.

That being said, it is definitely possible to become comfortable enough with your deck that you feel confident with your readings

Personally, I see tarot as a balancing act

To confidently read tarot, you need three areas of skill, all of which can be developed through study and training:

I am still working on my tarot journey (and likely will be for a very, very long time!) but here are a few tips from one tarot enthusiast to another that may help you to deepen your practice:

Tarot is a wonderful thing that, like any developing skill, can get frustrating at times. Stick with it, and don’t be afraid to try new things with your deck!

I’m cheering you on in your journey to learning tarot. Good luck, and blessed be!

Biddy Tarot helped me with the meanings and how to read the cards. Here’s a link that I got from the class:
https://documentcloud.adobe.com/link/review?uri=urn:aaid:scds:US:e6873ff9-4e80-4150-9b68-d7137b3fafeb

I really hope that this helps!! Let me know if you can’t open the link and I’ll try (try) to send it another way.

We can find, too, that we might get stuck in the exact meaning of the card from the little book or other resources. My advice would be to learn the cards by doing a daily pull. Then take that card and just look it over. What do you see in it? How does it make you feel? What are the symbols you notice? Then look at what the meaning is and see if you can find any other symbols. I actually recommend a book that was written by Jes Carlson for learning tarot and journaling about them. I did a video review of it if you’d like to watch it so you can get a feel for the book. 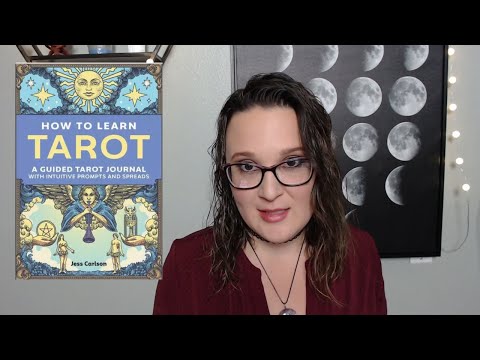 Hi Trey, I understand where you are coming from! When I first started, I focused on trying to memorize (which I don’t do well) and was getting frustrated. Then I found Biddy Tarot that @christina4 mentioned. She encourages you to lean into your intuition of what you feel the card means first. What is your gut reaction when you see the card? @MeganB has great advice too. I pull at least 3 cards daily now. I journal my first reactions, what symbols I notice, how I feel they relate to each other. Once I have all that, then I’ll look up their traditional meanings if I don’t know them. Rarely do I need to add anything (usually only with the major arcana). Doing it this way over the last several months has really connected me more with my decks.

My progress is slow as I use several decks, depending on which one my guides what to use that day, and do read reversals. I contemplated not learning reversals at the beginning but felt I would miss out and it would take me longer later to learn them.

I hope this helps!

Sometimes it’s the questions you ask that make a difference. Biddy Tarot is supposed to be really good at helping you learn, and read lots of books. One book will have a different meaning or mention than another and they’ll all mix up in your subconscious and come out at the right time.

Personally, I do an in depth dive into a card once a week and write a short haiku about it, that helps me learn. But that’s just me. You’ve got to find a way that tarot speaks to you. Sorry I couldn’t be more help.

I agree with what was mentioned above. At one point it’s not really about memorizing but rather interpreting what you see. It’s good to know the symbolism hidden in each card to have a reference or starting point.

Here’s a practitioner that explains how to start reading without memorizing all the cards, this is the course “Tarot Oracle”, it’s a lot more intuitive and creative work.

@Trey , you’ve gotten Wonderful help and advice from these generous souls. Im still learning and figuring out my way. For me, i feel it depends what deck you are bonded with or buy. Just recently, i bought the Everyday Witch Tarot. Which i cant believe how fast i bonded with. I ended up buying the Oracle, and mini deck from same author and artist. On most of the cards after studying them visually. My intuition actually resonated with the same meaning as the author. I was floored at this lol… I also own the Green Witch tarot- which i bonded, however its a different bond. I still cant read them intuitively without the book. But, the readings have been very accurate. My intuition lead me to, I believe to use these cards for spells and rituals. And use my new deck for readings. I have another Oracle deck that i have not bonded with at all. And, the meanings in the description booklet read like riddles to me. They are put aside and may use them at some future time. Or maybe frame them and use them as artwork? Because they are beautiful and way too expensive for me.

Blessed be. Be patient, it will come!

Congratulations on deciding to learn the Tarot! I don’t think it is necessary to memorize all the cards… that is what the pictures are for, lol. There are some ‘tricks’ that can help you get a feel for the structure of the Tarot.

You can think of the major arcana as being ‘themes’ and the minor arcana as being ‘details’. The minor arcana has four suits, corresponding to the four classical elements which each have their own qualities and associations. Further, the cards are organized similarly to playing cards, with numbers and courts. You can use numerology here, and read the court cards as real people.

I do a three card spread, and the first card is the Queen of Cups, the second card is Death and the third card is Two of Wands.

Without any memorization, I associate Death as a major transformation of some kind. Since it is in the middle, this indicates that the big changes are happening right now in the present. The left hand side is the past, which is the Queen of Cups. Queen is an older, powerful woman, and Cups are the element of water, so I can interpret this as emotional wisdom or as a past relationship that was very endearing, perhaps with an older woman or motherly figure. The card on the right hand side represents the future, and thus the outcome after the transformation is complete. This card is the Two of Wands, Wands representing the element of Fire. According to Numerology, 2 is a number of partnership and cooperation. If we look at the photo on the card, we see someone looking out over a field. This could indicate working with others or cooperating to achieve goals. Action is a key theme of the Fire element, and consequently, the suit of Wands.

This is a more intuitive way to read Tarot, but I feel like it is an excellent way to start without memorizing what each card means. Also, this method allows you to develop your own personal associations with each card, letting them truly speak to you without expectation of what they are ‘supposed’ to be saying. Over time, you can compare your personal meanings with the book meanings to diversify your practice.

Have fun and good luck!

Even though I do have and use tarot cards, I also use Oracle cards in which I do love and use the most. In tarot for those extra things when making a deeper reading. But both are good.

This is great information here!!! Thanks a bunch @Katy_Mysticsens