Okay, folks. Here’s my entry for the History of Magic challenge. I looked at several different sites for this information but they all pretty much said the exact same thing so I’m going off what I found on Wikipedia. I also looked through a couple of his books I had for a quote and a bit more information. They’re on my shelf so I can’t link those but I did link his Wiki. Hope y’all like it.

Scott Cunningham was born in Royal Oak, Michigan in June of 1956. His family moved to San Diego, California for his mother’s health, and aside from some time in Hawaii, he lived there all his life. Cunningham had one older brother, Greg, and a younger sister, Christine. Scott was openly homosexual for much of his life.

He learned about Wicca in high school from a childhood friend and started practicing Elemental magic. He studied at San Diego State University during which time he met the renowned author Raymond Buckland, and was roommates with author Donald Michael Kraig.

However, after two years in the creative writing program, he dropped out, having had more books published than many of his professors. In 1980 he began training under the witch and author Raven Grimassi. He became a first-degree initiate and stayed in that coven until 1982, when he left to follow a solitary path of Wicca.

Not much else is known about the man. He published his possibly most well-known book, Wicca A Guide for the Solitary Practitioner in 1988. In the introduction he mentions the celebrated author Sybil Leek and that he had other, well-known Wiccans looking over the copy of the book, so he had friends among the pagan community.

He believed that Wicca should be open to all. He wrote a follow-up book to Wicca A Guide for the Solitary Practitioner in 1993 in which he said … “This book has been written with a single premise: that Wicca is an open religion. All can come before the altar and worship the Goddess and God, whether alone or in the company of others; initiated or not. Wicca is available to all interested people.”

In 1990, while on a book tour in Massachusetts, he became suddenly ill and was diagnosed with cryptococcal meningitis, from which he eventually died in March of 1993 at the young age of thirty-six.

He is still one of the most well-known pagan author’s though, and a manuscript was found that was possibly written in the late 1970s to early 1980s that was published after his death called Cunningham’s Book of Shadows: The Path of An American Traditionalist.

There was even a movie, Never Say Macbeth from 2007 where the actors try to break the curse of saying the Scottish Play’s name in the theater using one of his books.

He was a bright flame in the pagan community that burned out too soon.

Wicca: A Guide to the Solitary Practitioner, introduction.

Living Wicca: A Further Guide for the Solitary Practitioner, introduction.

Guide for the Solitary Practitioner in 1993

It has many chants I like and is a great book

Mabon Chant
Leaves fall,
The days grow cold.
The goddess pulls her mantle of earth around her
As you, a great son God, sailed toward the west to the lands of internal enchantment, wrapped in the coolness of night.
Fruits ripen,
Seeds drop,
The hours of day and night are balanced.
Chill winds blow from the north whaling laments.
In the seeming extinction of natures power, oh bless goddess, I know life continues.
For spring is impossible without the second harvest,
As surely as life is impossible without death.
Blessings upon you, our fallen God, as you Journey into the lands of winter and into the goddess loving arms
Blessed be!
Jeannie

Thank you for your contribution

That’s a nice chant for this time of year, thanks for putting it up @Jeannie1!

Thank you for your contribution

Thank you, glad you liked it!

That’s a lot of great info on Scott’s life history and life. There’s a bunch I didn’t know about him! Thanks so much for your entry!!!

Thanks, love! Glad you liked it! I tried to find out stuff from his middle years but short of buying the book that was published about him and reading it, there just wasn’t any. Not that I could find at least.

Oh, I love that. I will look for this book

Ow Awsome that’s great Mary, I think this was one of my favorites bye Scott Cunningham! He had all the Sabbats and rituals with and so many different ways to be witchy and practice witchcraft.
Blessed be!
Jeannie

Thanks for taking the time to explore one of the most popular authors in the witchy world- Scott Cunningham gave so much to the community with his works!

A shame to lose him so young.

Thanks for all this information, @Amethyst- I didn’t know they used his quote in the movie! This was a very interesting read

Thanks, @Jeannie1! He’s one of my favorite witchy authors.

Thanks for all this information, @Amethyst- I didn’t know they used his quote in the movie! This was a very interesting read

You’re welcome! Glad you liked it! That fun trivia fact makes me want to track down that movie and watch it, you know? LOL!

Thanks a lot for sharing his life, @Amethyst I’m still reading “Wicca: A Guide to the Solitary Practitioner” and found some things you mentioned. It’s a great book, and I thank him for publishing it and his life, it’s a great gift for us.

You’re welcome! I’m thinking of rereading it myself, if I ever get caught up on my reading list.

I have a Green Egg magazine with a tribute to Scott Cunningham. It helps shed some light on his passing away and some of his personal life for anyone who’s interested: 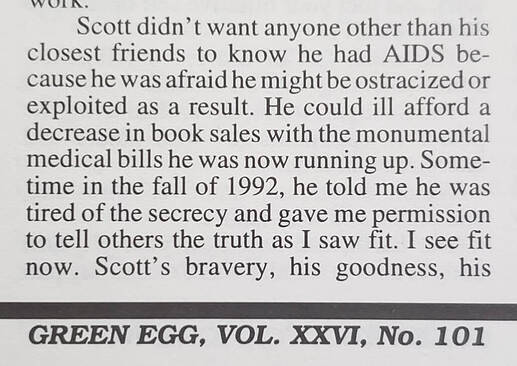 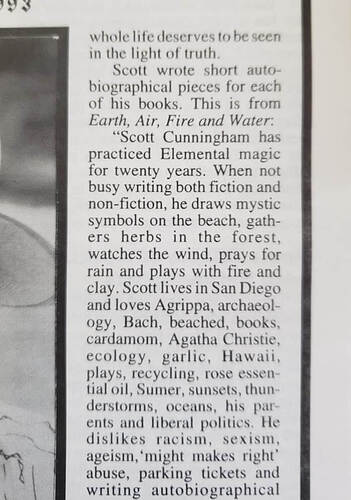 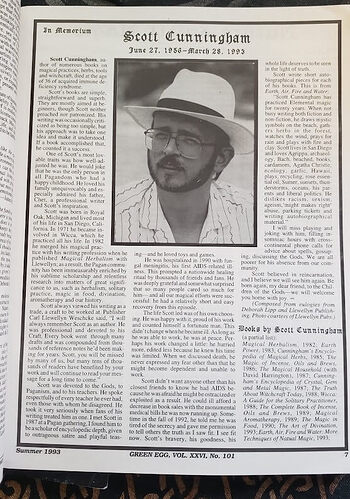 I found the line “and prays for rain” weirdly relevant even though it’s from 30 years ago.

Thanks, @Francisco for the added information!