Mod Note: This post mentions the potential triggers: death and massacre. Please continue reading at your own discretion.

So, this is my first entry for one of the challenges as a new member, and I think it fits into what I have been reading up to recently. 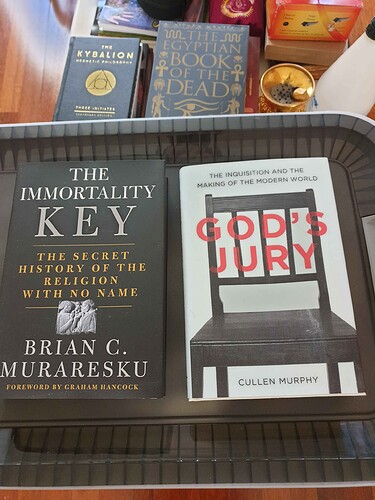 Recently I finished reading The Immortality Key and am yet to read God’s Jury which is more specifically about the inquisition as it happened all around the world and even up to today in the modern world.

What Immortality Key was about, was about the original ‘Eucharist’ before the church came to form and made its own. The book is about the Ancient Mysteries of Greece and Egypt as well as sacraments used all the way back from Göbekli Tepe to current tribes.

Many of the original sacraments are said to have contained hallucinogens, which gave that which consumed them visions. Some of these sacraments would induce death like states where you would experience death before re-awakening enlightened and no longer afraid of death, allowed to get on with life without fear. 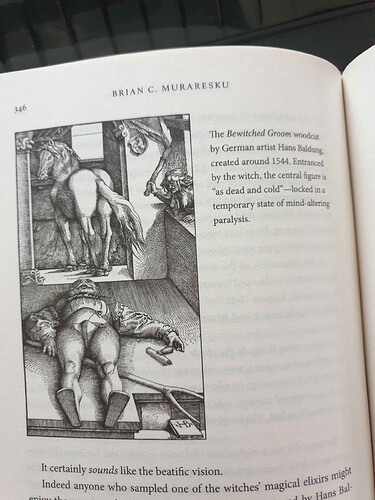 The Eleusinian Mysteries were initiations held every year for the cult of Demeter and Persephone based at the Panhellenic Sanctuary of Eleusis in ancient Greece. People would travel for weeks to attend and be intiated. It is understood there were various ‘degrees’ of initiation, and the highest degree may have included a hallucinogenic beverage made of ergot grown on the wheat (ergot is a fungal infection which grows on wheat, and has just recently been synthesised into LSD by accident by Albert Hofmann when he accidentally consumed some during his research and experienced the most profound of trips.)

When the Roman Church was formed, this book goes on to describe that the original Eucharist was originally based off the one found in Eleusis. As, a placebo eucharist would not attract pilgrimage.

The Romans burned down anything to do with the mysteries and created their own Eucharist and many of their stories of Jesus are closely linked to the wine-god Dionysus (Dionysus is the god of the grape-harvest, winemaking and wine, of fertility, orchards and fruit, vegetation, insanity, ritual madness, religious ecstasy, festivity and theatre in ancient Greek religion and myth).

The history of these mysteries are still hidden in the artwork beneath the Vatican in the catacombs. 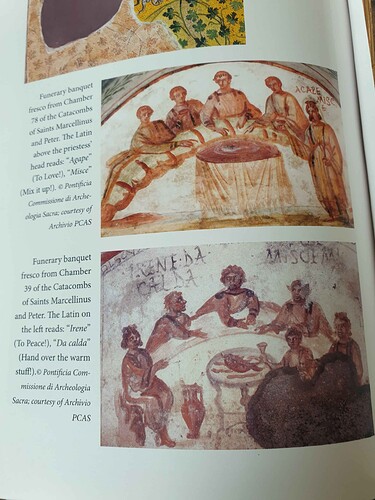 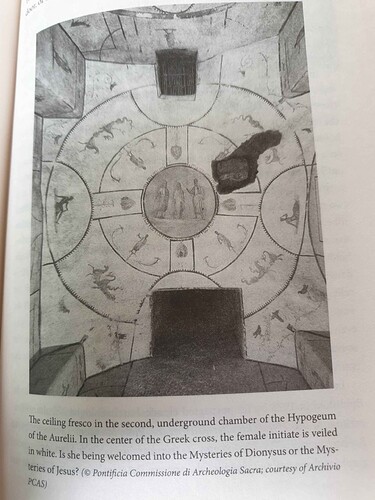 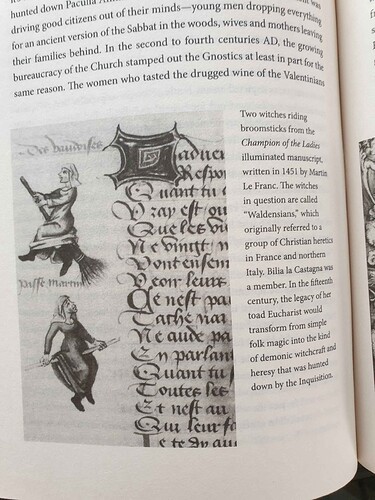 Witches continued on for centuries. Running their own ‘home-churches’ or ‘home-sermons’. 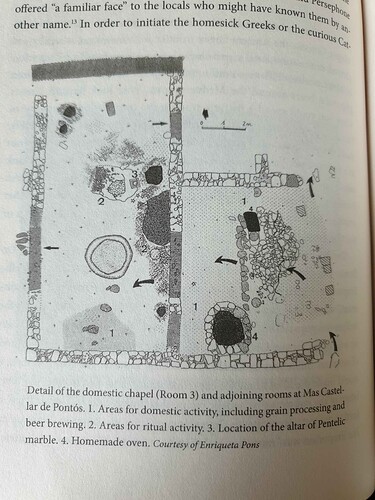 In-fact, they were not titled ‘witches’ until much later by the church.

These mysteries and eucharists were almost always run by women who were proficient herbalists and psychics. 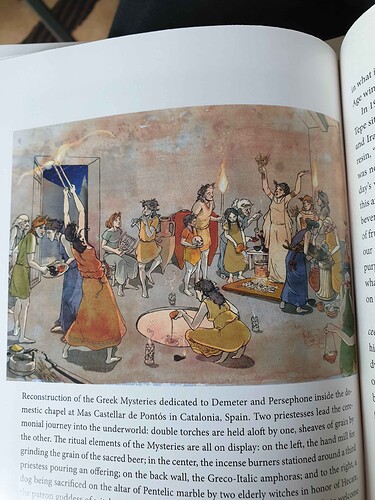 These rituals and these ceremonies were passed on through generations within families and ran mostly in secret and kept esoteric.

The Roman Inquisition kicked off after the launch of Martin Luther’s Protestant Reformation in 1517. The Vatican continued to stamp out dissent over a period of 650 years. It was preceded by the Medieval Inquisition in 1184, followed by the Spanish Inquisition of 1478 to 1834 and the Portuguese Inquisition of 1536 to 1821, whereby the Grand Inquisitors hand-selected by the Pope put thousands to death in Europe and the Catholic colonies of India and the New World, including many Jews, Muslims, Hindus, American Indians and African slaves who refused to bow to Rome’s definition of God.

There is a paper trail of Witch Hunts scattered in archives from Spain to Portugal to Latin America. During this time, the church burned many ‘geniuses’ and persecuted thousands of innocent Italian grandmothers.

These efforts left a deep psychological imprint. The inquisition levies penalties of some sort on hundreds of thousands of people and generally affected millions. A campaign in which the fear and shame instilled by any individual case, even a minor one, rippled outward to affect a wide social circle.

The Vatican waged a profound psychological war in women. Many wizards such as Bruno were also targeted.

Over 150 years after the Bernardino of Siena sent the cat lady Finicella to the flames in Rome in 1426, his people back home in Tuscany were still chasing the same witches, trying to cut the infestation off at the root.

Women were targeted by the Inquisition because they were heirs to a ‘do-it-yourself’ Eucharist that came from the Gnostics. Were they just trying to eradicate all those drugs in the witches’ ointment? The kind of drugs that may have spiked the Sabbat “wine”?

So, thousands upon thousands of mothers, along with their daughters were targeted and persecuted, killed off. The term ‘witch’ was instilled in our psych. And still to this day if you tell someone you are a witch, the first thing that comes to mind is Satan worship or other evil deeds. The power of the word and social sway!

This did not only happen to ‘witches’. The church banished Eucharists and drugs in even our tribal ancestors. From Southern America and even to the American Indians where they finally failed. Again, wanting to ‘stamp out’ the ‘evil practice’ which was the use of peyote, as the sacrament was interfering quite seriously with the work of the missionaries.

Albert Hensley, a member of the Native American Church and the Winnebago Tribe of Nebraska wrote an impassioned letter in 1908 that captures the real origins of the War on Drugs - which was nothing less than a war on the religion with no name. There we no public health and safety concerns. No issues with quality control or consumer protection. It wasn’t an administrative decision. It was an act of spiritual war. Like the Inquisitors in the Old World who predated them, it was Christian missionaries trying to eradicate a homemade Eucharist that actually worked. Something that actually gave meaning to Jesus’s words about the beatific vision in the Gospel of John: “I am here to give sight to the blind… I tell for certain that you will see heaven open and God’s angels going up and down.”

Witchcraft is a path you can take on your spiritual journey, and its persecution is a testament that proves those in charge take a dislike to it. Though, much of the ancient practices and magic ‘brews’ were lost in time. Much of the old grimoires burned to the crisp.

The war on awakening still goes on to this day. The control of your sub-conscious through the media, and social-media alike. Going about our daily lives in ‘automatic’ mode.

Have you ever driven to work, only to get there and not remember how you drove, yet managed to stop at all the traffic lights and somehow automatically arrive at your destination.

Witchcraft and the power of your will instructs your sub-conscious through thought and willpower. We have the power to change our lives and to be in full control. But they don’t like it

Apologies for the long winded post. I hope it’s not too mixed up and makes sense. But these are the learnings I have had about the craft and beyond that. Beyond the title of ‘witch’.

This is COOL. Great job. Thank you for sharing what you’ve learned! It’s really fascinating.

This was a very interesting exploration of witchy history- I didn’t know much about the Inquistion, but this shed a light on some of the darker aspects. Really well explained, @Temujin_Calidius! It does seem like this week’s challenge theme aligned perfectly with what you were already exploring

(Please be aware that I added a Mod Note to the top- while the forum encourages everyone to share, we ask that small warnings be in place to help protect those who may be hurt by topics that are potentially triggering. For more info, please see the Forum Guidelines)

The war on awakening still goes on to this day. The control of your sub-conscious through the media, and social-media alike. Going about our daily lives in ‘automatic’ mode.

Awakening and being more mindful (as well as learning stop, be aware, and then be grateful) has been a huge part of my journey into spirituality and is what largely lead me towards identifying as a witch. The Craft is so connected with the natural world- it really helps me to stay grounded and enjoy the moment.

Even still- I do find myself having those “automatic” and “brain fog” moments on busy work days! But certainly much less than before.

Thanks so much for this deep-dive into witchy history, Temujin! You have quite a way with words- it was a very powerful read