Threat? Does anyone recognize this 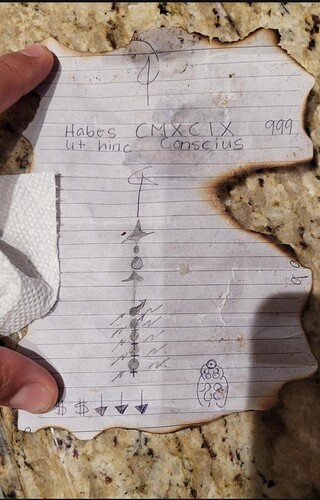 Someone was sent this drawing with a chicken foot, some sort of dust and a coin. . Does anyone know what this means? The phrase is Latin for You have to go from here and the numeral 999

Did you burn it or did it come that way? do you have any idea who sent it?

the 999 is written in both roman and arabic numerals. the sender definitely wanted to send a message. 999 is used in hoodoo.

what KIND of coin was it?

The dust may be goofers dust which is a hoodoo spell item. You don’t want anything to do with goofers dust. I mean, a curse is only powerful if you believe in it. but still. If it’s goofers dust, it can contain actual, harmful ingredients. No one would send goofers dust unless they meant to curse someone, even to death. It’s very black magic.

Likewise, no one sends a chicken foot to be nice. that’s hoodoo or voodoo. It’s meant to be a warning or to scratch the enemy of the sender. oth, a chicken foot can be a good luck charm, so…context. does the recipient have an enemy? a connection to hoodoo?

Are you sure that is what that phrase means? conscius means guilt. does it not mean “you have done and so you are guilty?”

there’s a sigil on it. The sigil could be the name, like a signature, it could be a taglock, or it could be another message. It’s impossible to tell. It’s not a demon sigil, from what I can tell. I think it’s an original sigil.

Interesting, but there is clearly more to this story. If you are worried, I would take it to a conjure shop but IN a closed container. Conjure work is not inexpensive but a conjure worker familiar with hoo doo may know what to do to reverse the hex or curse. If you are not worried or do not believe in hoo doo, then I would wrap it up in many layers and dispose of it all or burn it and do a protection spell after. And wash your hands WELL.

I was just told it was bones not a chicken foot and were trying to figure out what bones. It was sent to her father by a family member but that’s all I know right now. I’m going to let her see this so I can get more answers. Thanks so much for your answer!! Oh and I only translated the first part… I didn’t even notice the conscious until you pointed it out. Thanks again and hopefully I’ll get more information

Susan, I have no idea what it means, but it unnerves me. 999 is Christian for really bad things. I’d question if anybody sent me bones of any kind. If I were you, I’d do a return to sender spell, that way if it’s good, they reap the benefits, if not, they get whatever they wished on you. Win, Win.
Garnet

I asked and here are her answers. I sent her a link so hopefully she can join this thread because it seems so evil and ominous :

I don’t know what kind of bones they were, I wish I did.

A family member sent it, one who is very involved in these sort of things. My dad has done a lot of wrongs to others and recently even more so.

The coin was a brass coin, that’s all I know I don’t know if anything else was on it.

Another translation could be “you have 999 to be aware of.”

It makes no sense, but my first thought was the song “I got 99 problems.”

The dollar signs and the down arrows don’t seem like a good sign, and neither does the strange woman figure bottom right. In the center sigil I see the symbol for Mars twice, though one also seems to be used for the symbol for Venus, followed by three Venus symbols. The weird “4” symbol at the top appears to be reversed under the Latin. The other symbols I do not know. There are smudges on the page and it appears that there was additional writing on the missing parts of the page. Some of the page appears as of it was initially cut and then the cuts burned, especially at the bottom. The page appears to have been folded at some point, left to right, but the burns/cuts do not appear to be symmetrical. There may also be some top to bottom folds.

That is what I see in the image, but I have no idea what it means. It does not seem like a blessing.

If it was sent to her father by a family member, hmm. Well, it could be good or bad. I wonder if the coin was a dime or an artificial hoo doo coin (manufactured). 999 in hoodoo can be good or bad, a chicken foot (I know you said it was bones) can be good or bad, it could all be a gambling charm. The dust could be, like I said, goofers dust or graveyard dust. Honestly, I don’t think it’s good. I’m trying to put a good spin on it

I have read that bones in witchcraft and hoo doo are well, imbued with the spirit of the animal, to help or do the bidding. If they were painted or colored, that would be significant. I am talking like I know this stuff, I really only have a passing acquaintance with it.

To me, it looks like it was charged over a candle flame. the candle may have also been charmed or charged for this purpose. I think that’s why it’s burned. But I am only speculating. Whoever sent this, went to a lot of trouble to set an intention and send a message. so many elements… Those geometric designs – they look like hoo doo to me, too, that goes way back to old African magic, unless I’m mistaken about it. It does not look like the more beautiful, complex examples I’ve seen, but it likely has significance for the sender.

It was a VERY interesting question. If I got something like that, I’d be putting up protections like crazy. I have been lightly researching conjure work, vou doo and hoo doo traditions but I have held off on exploring it myself – even root work I was going to do – for a number of reasons, one being my inexperience, two being some of it is baneful and three because I do not want to appropriate a cultural practice that is not my own out of respect – but I am fascinated by it and want to learn about that. I would love to hear what your friend says but I respect your and her’s privacy. Your call.

That said, did this ever creep me out! whew doggies!

OH ho…so there is reckoning here! Justice comes to call! the copper coin was probably like one you get in a conjure shop maybe. for the up and down design, maybe look at veve designs. they are geometric and vertical. to me, that design looks like an amateur veve.

the coin may be a touch piece that is imbued with energy or power to carry out an intention. although we usually think of coins that are lucky, coins can be enchanted to be unlucky, too. a more dire interpretation would be that the coin is somehow connected with sending a bad or evil spirit to the home

a lot of these rituals originated because people felt wronged and were helpless to change their situation in more direct ways – so they went the spiritual route. My guess is this family member feels both wronged and disenfranchised or helpless in some way. No bueno!

I sent her link to this thread so hopefully she can join us and fill in the blanks. Until then, I copy and paste the answers to her. Thank you all so much!!!

After reflecting, your dad should take care, karma is a Bit@h. And she takes no prisoners.