Worship with Odin and Loki

That blanket is even more amazing than I had imagined!!! WOW! Cool way to get cozy

He loves that blanket. I really like it too!

If we are watching movies upstairs he will bring it up to lay under. Meanwhile, we have oodles of blankets upstairs, some King size so like 3 -4 (including the dog

He is a great man & has no problem talking to me about his pantheon & the things that are associated with the Norse.

I can’t remember where we got it, but it has symbols on it. Obviously, he doesn’t use it, but he has it hanging in his room with the sheath on it.

It sounds like you and your son have a wonderful bond. I love my sons and I know how special they are. He is very lucky to have you as a mom too! Sooo cool to share some of the same interests!!

I would just wait for him to find the books though. It’s not worth losing you and a search party over

Seriously, once they hit a certain age, you’re better off having them find things for you from their rooms

LOL I totally agree!! How old was he when I began his journey with paganism and the norse?

Uh… within the last few years. So when he moved home he was so happy to talk to me about it.

Thank you so much for all this information!!

I’ll begin to put offers to Odin’s ravens from now on and when I cast the runes.

And about Loki… I know that he is a trickster and that he is not a figure worshiped by the Nords but somehow I was attracted to him. I don’t know how or why but I started dreaming about him and feeling a very strong attraction.

Now I wanted for myself! jajjaja

I will let him know! If he wakes up before I leave I will find out where he got it from & let you know. It’s like his “blankie” at this point

No judgement here regarding your interest in Loki, at all. I still think that, for those who are attracted to any deity or element, there are characteristics that ‘strike accord’ with us. Maybe you feel that you can save him, that you understand him as a misunderstood outcast, etc. All of that and more is fine, I think (I hope I’m right!

), a long as you are aware and stay safe!

This sounds like the start of a thrilling adventure and I eagerly wish you great fun with it!

I’m not the main character of a teen movie

I just like the chaos that surround him, and that’s all.

I think that he & Set just get a bad name
Because people don’t try to work with them:
The lower hanging fruit are the light gods
While the dark gods scare people.

If more witches worked with them then
Serious disease can be cured.

They helped me manage my mental illness:
Less sickness with less meds, my psychiatrist
Himself told me I look much healthier

And act much more normal, so he’s lowering
My meds. I feel better than I felt for years.

This has cost me a lot: a lot of shadow work,
Handling a lot of trauma especially familial one: my mom being cold & distant & punishing all the time & my dad being too indulging.

I believe @Amaris_Bane has worked with Loki

@john.knox, you bring up a good point… the Gods/Goddesses that are labeled as Dark don’t automatically mean they mean any harm. I work with a Light & a Dark Goddess.

I personally don’t know much about Loki himself, except that he can be a trickster.

My psychiatrist, therapist, and husband… couldn’t be happier with my progress. A year ago I started working with the Morrigan & since then I have come a long way & now I recognize when she needs me to hear something or when Brigid is calling me. They have different ways of letting me know who it is & then what it is that needs to be done or that I can do or have to do.

Without getting into too much, without the Morrigan I never would have gone & opened up to my psychiatrist & then opened up to her, my therapist, & my husband.

I don’t work with Loki but I do work with his daughter Hel, Queen of Helheim. She is an aspect of the Dark Goddess. I’ve only recently started to work with her but both her and Hades are helping me with my mental illnesses (GAD, MDD, & ADHD).

I know a few people that do work work Loki and they all give different offerings. I do know that he will destroy candles when lit on his altar - breaking the glass or causing a free-standing one to burn quickly and wax go everywhere. He likes the candles but it’s his mischievous side coming out. He also likes cinnamon (as well as anything cinnamon scented) and candy. One friend has had him pick random toys as offerings. Honestly, they say that they offer whatever they are called to - he is the Lord of Chaos so random offerings are a pretty good choice.

@Amaris_Bane I honestly think I was thinking of Hel

but couldn’t remember how she associated with Loki & you had mentioned Loki when speaking about Hel… I hope that makes sense.

Thank you for the information regarding him that you are aware of though! It’s much appreciated!

My “Dark Goddess” the Morrigan is much like Hades or any other Dark God or Goddess. She works very well with me & has helped immensely with my mental health, without going into any diagnoses for myself. She did help push me forward into healing & facing what was holding me in a rut with my mental health.

I wanted to add that one friend doesn’t have an “altar” for Loki. She has a place for his candle and statue, but he’ll have her put offerings in random places around her house. She tries to keep it respectful (like not putting them on the back of the toilet no matter how much he urges her

) and in places that they will not be messed with by others (she has pets and small kids).

Ha! I finally got him to take pictures of a few of his books. He’s seeing what else he has for Asatru & Heathenry & Runes… he likes to be thorough sometimes 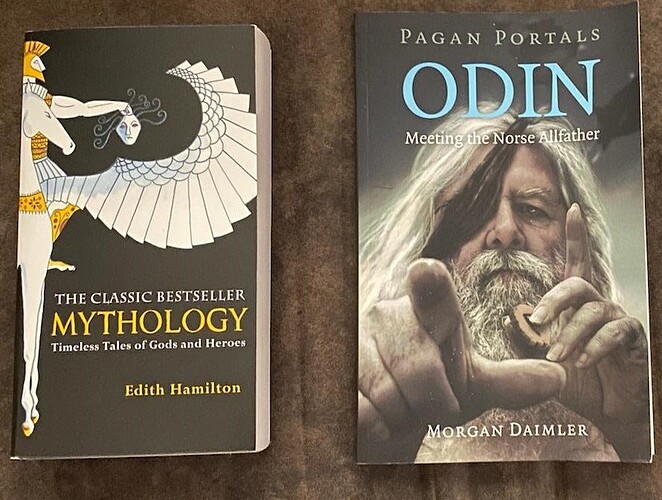 Youtube’s Freyja Norling has at least 3 videos on Loki, including Loki as the Spider God, and a spell using oranges to battle anxiety. Here’s the link to one of them you might find interesting as it posits a unique theory…

(712) WHO IS THE ANCESTOR OF ALL NORSE WITCHES? - YouTube

She also has videos on Odin, Thor, Freyja, etc., the Sarmi of Scandinavia, Rune divination, etc.

Warning: Do not watch if using blood and/or the respect of animal antlers etc triggers you. Nothing harmful occurs.