Bean Sí 😱 A Herald of Death

You’ve all heard the stories…

The slow crunching footsteps beneath me are the only noise on the dirt road. It winds, twisting and turning through the fields to my home. It’s dark, and the walk is long and lonely. I have about a mile to go before I reach the comfort of the cottage. The thought of warm stew and potatoes makes my mouth water, and my arms shiver, as I clutch my jacket tighter around me in the cold.

I stop abruptly, the blood in my viens turning to ice at what I thought I heard. My heart beats quickly in my ears, the only sound beside the rustling of the leaves on the branches above me. I must have imagined it, I think to myself. Surely it isn’t time yet…

There it is again! The wailing cry of the bean sí pierces the night, louder this time. She’s getting closer, and I can’t stay still for long. I break out into a sprint, running as fast as I can up the road. She keeps wailing, her keening filling the air around me. It’s cold, and my breath comes out of my mouth in warm puffs of white air.

The hair on my arms stands up on edge as I crest the hill, my house standing in the distance. The lights are on inside and smoke rises from the chimney. There are people gathered by the door, a crowd that shouldn’t be there.

It was the bean sí, and someone is not long for this world.
– - Megan Black 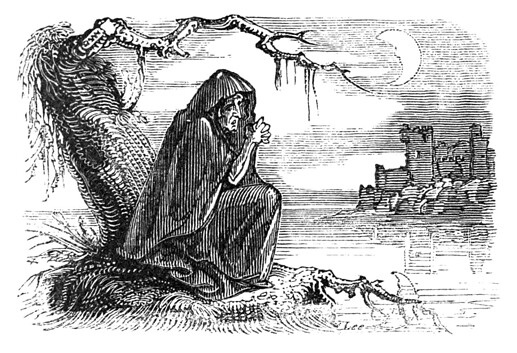 The literal translation of Bean Sí (anglicized as Banshee) is “woman of the mounds”. In Irish folklore, she is a female spirit that heralds the death of a family member by wailing or keening. According to Jones’ Celtic Encyclopedia [1], she is usually dressed in a gray cloak and green dress with red eyes from all her weeping. Jones’ Celtic Encyclopedia also says that the Bean Sí is usually associated with one family and that when you hear her keening, someone in that family was going to die.

“The banshee (from ban [bean], a woman, and shee [sidhe], a fairy) is an attendant fairy that follows the old families, and none but them, and wails before a death. Many have seen her as she goes wailing and clapping her hands. The keen [caoine], the funeral cry of the peasantry, is said to be an imitation of her cry. When more than one banshee is present, and they wail and sing in chorus, it is for the death of some holy or great one. An omen that sometimes accompanies the banshee is the coach-a-bower (cóiste-bodhar)–an immense black coach, mounted by a coffin, and drawn by headless horses driven by a Dullahan. It will go rumbling to your door, and if you open it, according to Croker, a basin of blood will be thrown in your face.” [2] 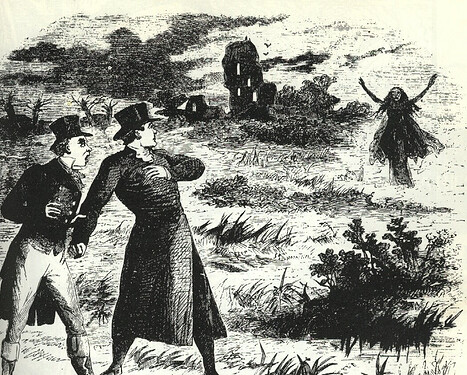 There was speculation that the Banshee may have been an ancestor of the family at one point in time, though I don’t know for sure. Some sources say that the only families that have a Banshee are those that begin with O’ and Mac, though other sources say that isn’t true. This shows that the Banshee is not one being but possibly many, with each family having its own. However, not every family will have a Bean Sí and you most likely will not find a Bean Sí outside of Ireland.

And here are some quotes from Duchas, the collection of Irish folklore.

About twenty years ago, my father heard a banshee. A women named Mary O Donnell was sick. The banshee was walking on the tops of the bushes. It was in the Sumer-time and my father was milking the cows outside in the fields. When the cows heard the banshee, they began to run through the fields and they would not let him milk them. So he had to bring them into the byre to milk them. In an hour after, the banshee went over to the house and tapped at the window and the girl died. Then the banshee disappeared. [3]

The above story shows that just because you hear a bean sí doesn’t mean it’s someone in your family that is going to die. As some of the sources say, the bean sí is only attached to specific family lines in Ireland. Some say those are the oldest familial lines. Others, like the story below, give those specific names. Yet still others say that many families have a bean sí, but not all.

The old people around this district firmly believed in the Banshee. I often heard my mother say that there were certain families that were always “cried”. These families were the McGowans, the Gallyaghers, the Keanys, the Meehans and the O’Briens I heard my father say that he and an uncle of his heard the banshee crying one night just before an old Keany woman died. A McGowan lad lived beside us. He had a sister married down near Derrygonnelly, Co Fernanagh. Before this sister died the story goes that they heard the banshee. I also heard other people saying that they heard the banshee and it always foretold the death of some person.

Some people have brushed off the story of the bean sí only to realize later that it was a mistake. Either that, it was pure coincidence!

Once upon a time I heard the people saying there was an old man lived at Greenhill and one night he was going to St. Johnston and he heard a great noise and at first he thought that it was a child crying. He told the people and they went to hear the cry and there was a man there that heard the Banshee before and he said that it was the Banshee. A few days after that the old man got sick and he soon died and he was one of the people that the Banshee followed. [5]

Whether you believe in the bean sí or not, she has played a large role in the folklore in Ireland. There are stories of the bean sí all over the country, and some of those stories have followed the diaspora over to the United States. You can even see pop culture depictions of the Banshee in shows like The Vampire Diaries.

I do want to point out that this spirit, this woman of the mounds, is not a spirit to be summoned or messed with in any way. She is not a guide. She is not a member of the Sídhe as we know Them, and she is not a psychopomp to the Otherworld. Despite what one popular author has written, you should not summon a bean sí to act as a death doula or tour guide of the Otherworld before you pass. That isn’t her role and she most likely can’t be summoned anyway.

Scary. I will make it a point not to mess with her.

Glad I am all the way down in Oceania.

Huh. That’s a scary bit of info! I wonder if the Mothman is a local version of the Bean Si? Here in WV, he appeared for about a year before a bridge collapsed and a lot of people died.

I’ve heard about and seen depictions of Banshees in what seems like countless stories (The Witcher came to mind first haha) so I had just assumed they were similar to dragons or fairies in that various cultures had their own version of them. But after looking into it, it does indeed look like Banshees tie back to Ireland- really interesting to learn about!

Scary stuff indeed- not something I would ever want to work with, but always fascinating to hear stories of. Thank you so much for sharing your wisdom, @MeganB- this was fun to read!

Oh wow! In learning about Celtic Paganism & the Morrigan I have come across her association with them through her sister Macha & Badb & the Goddess of Death & Queen of the Otherworld.

The Precursor of the Banshee

"As an omen of death and bloodshed, the Morrigan may have served as the inspiration for one of the most iconic creatures of later Irish folklore.

From the Old Irish ben sidhe , the word banshee can be translated as “woman of the fairy mound.” These mounds, the sidhe, were said to be where the Tuatha Dé Dannan made their homes after the arrival of the Gaelic kings.

There were said to be many banshee throughout Ireland. According to some legends, each of Ireland’s old families had its own harbinger of death.

The banshee appeared before the death of a family member, usually in the guise of a woman who is hunched over and dressed in dark robes. Her wails and cries of anguish foretold impending death.

There are many indications that this well-known fairy woman is descended from the Morrigan.

In some places, the banshee is called the badb, which was both the Irish word for crow and al alternative name for the Morrigan herself.

Crows can be a real-life indicator of death as they feed on carrion, but it is unlikely that the comparison to both the Morrigan and the later banshee is pure coincidence.

The name ben sidhe could also indicate a former belief in the character as a member of the Tuatha Dé Dannan. The one-time gods of Ireland were said to have lost much of their power when the Milesians, the Gaelic people, arrived in Ireland.