Can you help identify this symbol

I wasn’t sure where to post this but my son bought me these earrings this summer and I feel like i was drawn to wear them today. On top of that, I have observed some interesting things that were out of the ordinary today and was wondering if there was a connection.

Does anyone recognize the symbol? 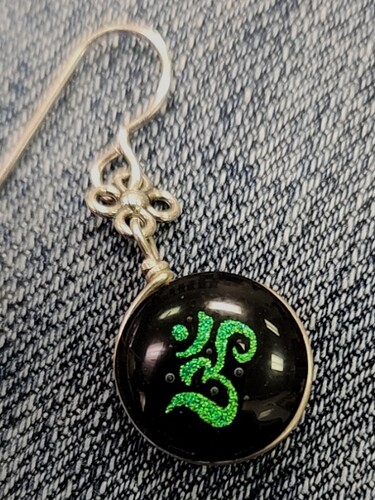 I definitely recognize the symbol. It’s the Om symbol

In Hinduism, Om is one of the most important spiritual sounds. The syllable is often found at the beginning and the end of chapters in the Vedas, the Upanishads, and other Hindu texts, and is often chanted either independently or before a mantra, as a sacred spiritual incantation made before and during the recitation of spiritual texts, during puja and private prayers, in ceremonies of rites of passages (sanskara) such as weddings, and during meditative and spiritual activities such as yoga.

It is the most sacred syllable symbol and mantra of Brahman, which is the ultimate reality, consciousness or Atman (Self within).

It is called the Shabda Brahman (Brahman as sound) and believed to be the primordial sound (Pranava) of the universe. – Om on Wikipedia

I saw them at a Renaissance Festival and my son noticed me looking at them. He bought them for me.
I am excited to be able to research more and see if there is a connection with the other things I’ve noticed today.

← we even have the emoji here in the forum for Om!

& the symbol is a part of its imagery as well as the mantra!

Hinduism is rich in symbolism. There are a variety of ancient sacred symbols that represents philosophies, teachings and gods and goddesses. Many of the Indian symbols are related to the secrets of cosmos and mysteries of time such as the flow of...