I was asked about hard polytheism and soft polytheism in my YouTube comments a while ago and finally got around to making that video!

I’m sure I mention it in the video, too, but keep in mind that hard polytheism and soft polytheism are categories created by the community to differentiate belief systems. The only word in all of that that has an actual definition is polytheism. 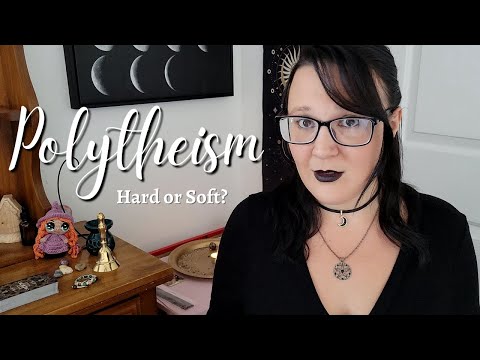 So what do you think? Where do you fall on that spectrum?

Can someone be a medium polytheist? For instance, I know the Greeks and Romans influenced each other so I see Venus and Aphrodite as basically the same. But The Morrigan is The Morrigan and is like no other, in my opinion. So yeah, I’m treading the middle of the road. LOL!

haha someone on my Patreon said the same thing! I think that’s totally valid, honestly. The only reason I see a need to distinguish between the two is when talking with others and sharing experience. That way we don’t get confused

Eh, confusion is my natural state. You get used to it!

I had never really considered where my beliefs fell on the polytheism spectrum- but having you put it out there so clearly, it was really helpful for me to be able to step back and examine my beliefs.

I suppose I’d fall more towards soft polytheism, mostly because whenever I learn about a new deity I love to look for the cultural influences or historical foundations behind that deity or spirit. When doing so, I often find similarities, or that one deity influenced or served as a foundation for other deities (the Greek and Roman deities come right to mind). I find it fascinating how traits of religions and spiritualities (and the deities they embody) both stay the same as well as adapt in different places around the world- just look at how Buddhism takes vastly different forms (with some unique and some overlapping deities) in different parts of the world!

But then again, like Amethyst said, there are moments when each local deity stands out as their own unique character. And at the end of the day, I really think that the most important thing is the personal bond between practitioner and deity- regardless of how others work with that deity. There was a great discussion here about Hecate (Hecate Is Going to Eat Your Face) and how different people see the same deity in vastly different ways, yet all have valid practices with Her.

I guess I have to take back what I said at the beginning of this post- I’d have to say I’m more of a medium polytheist too!

Thanks so much for this insightful prompt, Megan- it was a great one to explore!

I have reached a point in my life where I describe things as I see them and don’t worry about whether a term already exists for what I am describing. I think of myself sort of a centric polytheist, meaning that, exactly as you described, I think that while there are mutliple deities many of the names we use for them are in fact cultural “flavors” of the same deity from another culture. The Romans and Greeks are one example, but there are others. So there are multiple deities, but some of them have different names in different pantheons, while others are unique. In the end, I don’t know that it really matters. Your path is your path. Do what works.

I guess I have to take back what I said at the beginning of this post- I’d have to say I’m more of a medium polytheist too!

In the end, I don’t know that it really matters. Your path is your path. Do what works.

That’s exactly how I feel, too. The only reason I see a need to differentiate between the two is when discussing it with others. It would be very different discussions with myself that sees Irish Brigid as separate from Scottish Bride and Romano-British Brigantia and someone else that sees all of those deities as the same deity

No kidding haha the more I thought, the more I went in circles- but that’s what makes it such a worthwhile topic to ponder about!

It’s the tricky questions that really lead you to revelations. They help so much with exploring your own beliefs and finding your own answers! Very valuable stuff- thanks again for sharing it, Megan!