For the weekly challenge, I decided I would do a spell jar that I can shake if I want for a little extra oomph.

(You can click the link to see more photos 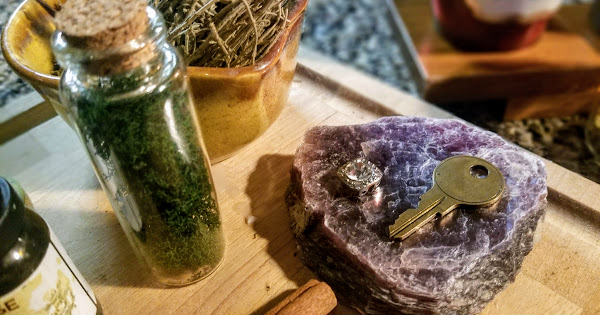 Crystals I used and had around me were Bloodstone, Citrine, Ametrine, Garnet, Quartz, Tiger’s Eye, Moss Agate, Pyrite, Rose Quartz, and Lepidolite.

Items were a jar, key, 8 coins, green ribbon, paper for intentions, and 2 candles, a green and white one.

These are not my words but I found them to be exactly what I needed: “I call upon the powers that be, to bring what I want, straight to me. By Fire, Air, Earth, and Sea, As I say, So mote it be.”

@janelle, love it! Your altar similar to mine! Been thinking what else I can do to expand it because I need more working space! Didn’t think I could add another large cutting board to use as my working deck. ( You Just gave me the idea TY) I live in a small city studio therefore breakdown altar is my way to go. I break it down and stack my tools in a basket with my cutting board on the bookcase. I’m sure your spell is full of energy and amazing intention!
Blessed be.

I know the common consensuses is to have an altar that is set up in a specific space but that’s not entirely possible in my home. I have an almost 9yo daughter and 2 cats whom are wild at heart and know nothing of boundaries(of course because they are cats lol). I do have a witchy desk and a side table next to it that home all of my tools, herbs, dehydrator, and such. I honestly don’t feel the need to have an altar in a particular area, my Love fully accepts my craft as does our daughter. I craft where I want with love and full acceptance from them, its truly a blessing.

The cutting board idea, great right?! I honestly don’t know where I saw it or if it just came to me but a friend of mine was getting rid of it and I asked if I could have it. I cleansed it not knowing what I was going to be doing with it, I just knew it didn’t belong in the kitchen, hah!

But, I have another idea! I use a pendulum and my Love does some wood work and wood burning. Either with this board or another cutting board I find, I think I’m going to sit with him and pick his brain about designing a pendulum board for me using his wood burning. I think it would just be grand!

As for my spell, I didn’t just put intention in there, I crammed it with what I have an abundance of.(Speaking as if I have it and giving thanks.) There is no limit, only your mind if you will it.

@janelle, looks perfect! Altar and the spell!! I love the cutting board idea! They really cheap and I get them at my local dollar store. However, will look for a larger one. The beauty of it, is like you said, you can take anywhere.( Planning on practicing outside on my patio as well.) Did the green candle melt over the jar? How does it look??

Lots of luck with your spell!!

Such an amazing setup, @janelle!

So many wonderful crystals- they look so beautiful (and also so organized!) in the cute little jars

And ooohhh a nice collection of herbs too- it must have smelled amazing while you were doing the spellwork!

I wish you blessed abundance and that all the desires you seek come to be!