Hey im not sure if anyone might have advice but i just thought id ask.
I did a grand tableu spread yesterday ( trying to communicate with sone spirits at work) plus as im not sure who was reachung out, i tried a 9 spread with signigicator to help.

But as i did it on an app i hadnt realised as i had to do the spread while at work (before anyone walked in ) that i hadn’t clicked all cards to turn them over n because saved spread it wouldnt let me turn the last two over.

Can i use a spread if dont know all the cards. ?
Or should i redo the spread?

If two cards are missing and can still use spread, how would i adjust reading the spread to deal with tge two missing cards. ? If was just one id be avle to figure out which sat where but with 2 its 50/50 chanve of getting right n i worry if get wrong it change meaning

If i trued today again i wouldnt have the crystals and blue lillie i had when did it last night but i do have my amethyst bracelet and hemitite necklave. Ive already made my intention to communicate known and if did spread again on phone id know this time to make sure to clivk all cards even if trying to do quickly to review later just so not habing to explain communicating to spirits at work.
I saw glimpses as led up to my commincation last night, not sure if it was the one reachibg out or another but though im not on late shift today i might be able to still do it. Just in the next room to where i did it last night. Hopefully it be ok n still be helpful to know what they need and who reaching out.

Either way im still only a few days old on learning lenormand system but so far ive loved the look of it. I hadnt been specific with question escept the 9 spread to try determine which spirit reaching out but just left myself open yo whatever they needed to say.
But i wonder though once got a start overview i could figure out specific questions… but id only have sjort burst of times to communicate while at work and im not sure if i can do spread outside of that place so id need to be wise and prepared goinh in to know what i need to ask. .
Does anyone have advice? Even with combining lenormand and tarot or oracle cards for furthef understanding?

Any advice wouls be appreciated. If i can help the spirit reaching out then id like to, im just trying to find a way to hear what message or quesrion or requesr they have accross the veil and while its thin im hoping it will help with rhat ao i dont want to loose that advantage… even if im sure id still be ablr to after this time to communicate with them…

Hope that made sense

I am just now looking into Lenormand myself but thinking about creating my own cards or maybe buying a set like this one. The advice I read was start with two card draws but going for the whole Grand Tableau, good for you! You’re trying to connect with that spirit at work, right? Did you think about using a pendulum and just trying some yes or no answers?

Either way im still only a few days old on learning lenormand system but so far ive loved the look of it.

Congrats to you for jumping into Lenormand, Phoenix! I’ve looked into it several times, but like Oracle I just haven’t made the click with a deck yet. I’m still on the hunt!

If two cards are missing and can still use spread, how would i adjust reading the spread to deal with tge two missing cards. ?

I’ve never dealt with an incomplete spread before- but I don’t think it should stop you from keeping in mind the messages that came across in the cards that you did see.

That being said, I wouldn’t try to piece out the “whole picture” and overall message using an incomplete spread- it seems to me like (a significantly less extreme) case of skydiving without checking all of the straps and buckles or driving a car for the first time without having read the whole manual- the missing pieces of information could be the most important.

Even with combining lenormand and tarot or oracle cards for furthef understanding?

All in all, I’d say it’s a good idea to back up/cross-check your incomplete reading with a full and complete spread in another method!

Good luck and blessed be, Phoenix!

What I love about the Lenormand deck is that, like the Gypsy Deck, it tells a story, as in telling a narrative about certain events. So, it’s as comprehensive and deep as the reader wants it to be. There are interpretations based on laying out the entire deck and reading all the adjacent cards, corner cards, forward and backward readings…simply wonderful!

Also, there are, like the Kipper deck, card combinations that have their own unique interpretations. My introduction to the Lenormand was with the Gypsy Deck, which was for me at least, highly intuitive.

For the Grand Tableau, consider taking a picture of the completed spread. Then, analyze the past events (behind the querant card), underlying circumstances (below), range (corners), etc with more time. You can also use the Tarot, Kipper, etc to help clarify events.
Since so much of card reading is based on intuition, I encourage ‘inter-deck’ (lol) readings and actually created an eclectic tarot deck for myself that combines several different card styles so that, in a pinch, I only have to bring one deck with me if needs be.

For myself, I don’t place much stock in online tarot spreads simply because I am not ‘in contact’ with the deck.

So, combine away! Just remember that the Lenormand is a narrative deck. It definitely sounds as if something needs your attention, so honestly I would suggest that ANY manner you choose, even scrying, will work, although the message may not be as clear.

OOH @Wysteria_Norn I’d love for you to consider doing a few Daily Lenormand Deck card readings in the October, November, December Single Draws 2022 for us, that would be very interesting. I have a Lenormand deck in my saved basket on amazon right now I’ve been meaning to purchase but haven’t since I don’t have much experience with them.

Thank you for the information you wrote above. It makes the deck much more approachable knowing it’s a narrative deck!

You are too kind @jan_TheGreenWitch! That’s the best way I have to describe it, yes, as a narrative deck as it tells as complete a story of an event or situation as the reader chooses. I chose to learn with the Gypsy Deck as each card literally states, on the card, how to read them which, for me, made it easier as I would then not have to continuously refer to another reference. 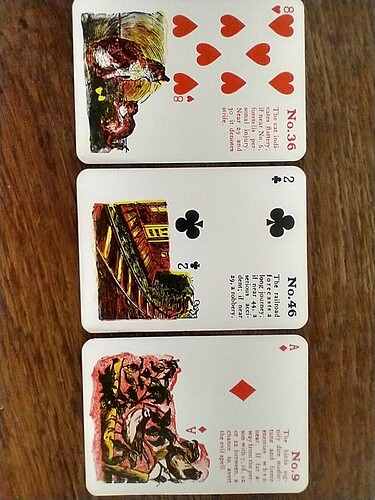 IMG_20221104_112203013_HDR1200×1600 737 KB
So, for example, two cards fall from the Grand Reverie Lenormand deck…which arguably is a ‘shorter’ reading, but quite comprehensive…the Seven Snake Queen of Clubs and the Nine Bouquet Queen of Spades, in that order because order is vital. Alone these say that there is a hidden danger or untrustworthy individual in the romantic matter under discussion…someone close to the querant, possibly a confidant, is a ‘backstabber’ and the situation may involve finances. If in a full spread, the cards behind this indicate circumstances that lead up to this, those below it are foundational to it, and those to the right are the outcome if nothing alters the trajectory of events. Also, certain cards are bridging cards (this will lead to that), while all surrounding cards mitigate the action cards. So, here, if cards to the right are positive, and the cards below it are intuitive, then the querant knows about this and it may even be beneficial to the specific outcome. 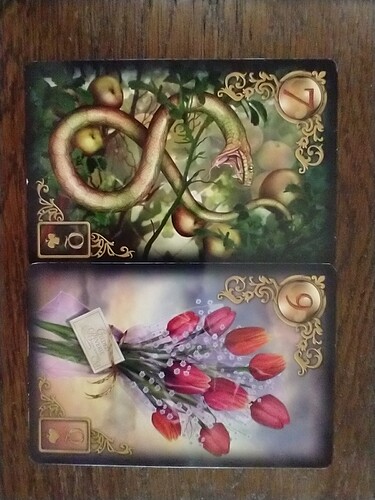 IMG_20221104_1122069251200×1600 666 KB
The Gypsy deck (first set of pictures) is the deck I use when I do a Grand Tableau, honestly. It’s a ‘stark’ and direct deck for me. Then, I use the Kipper and Grand Reverie for clarification as they have additional or different cards.
In my understanding, generalized readings are more difficult as these tableaus provide a narrative of specific events. So, for example, where Tarot and oracle cards in general provide outstanding generalized readings because they lend themselves so nicely to either long and short term outcomes, Gypsy and Lenormand are comprehensive readings about a specific event or time-frame.
Again, this is just my understanding and experience with them. I don’t know how well or accurately that would apply to a general atmosphere or audience as so much depends on specifics. That may be why these decks in their full spreads are not as commonly used for public readings.
5 Likes
marsha November 4, 2022, 4:14pm #7

OOH @Wysteria_Norn I’d love for you to consider doing a few Daily Lenormand Deck card readings in the October, November, December Single Draws 2022 for us, that would be very interesting.

I agree 100%, I would love to learn more about this deck.

That would be so dope! I hope create your own

I’d love for you to consider doing a few Daily Lenormand Deck card readings in the October, November, December Single Draws 2022 for us, that would be very interesting.

After going through the thread, Lenormand decks are something I haven’t come across & totally agree with @jan_TheGreenWitch & @marsha that doing a daily draw whenever you feel to in the Single draw thread for us would be amazing.

Also, definitely need some kind of side hustle just for decks of cards. Putting my thinking cap on now

I wasn’t drawn to Oracle until I found my first deck which was really close together with the second deck… The Way of Brighid Oracle & Inner Child Oracle.

As far as tarot & readings versus spreads… I started with a 1 card draw. Since we love honesty… I’ve never been able to read more than a 3 card spread without some kind of assistance or reference.

Whenever I go through a setback or feel disconnected when I am backsliding, I always start over with a 1-card draw for a while and then move to 2 up to 3. My tarot journal kind of does the same…starts with 1 and then continues through to I believe 4 or 5 & the last one is the Celtic Cross… which I have NEVER been able to do or be able to put together a way that makes sense to me.

I have only found one person that I can do a reading for & she is a close friend of mine that I talk to daily & it really happens by accident or started out that way anyway.

As far as specific readings or time frames, you could do one in the Single Draw thread for instance on Monday for the week ahead or Fridays for maybe a weekend outlook. I don’t know if that would be easier.

You don’t have to do just one card if the decks are more of a 2 card type of reading & the one card wouldn’t be something you were comfortable with, however, you would be comfortable doing them is fine. The thread is totally open to however you are comfortable presenting the draws.

I have done one post with several draws or a draw & an affirmation… I have used stones, runes