It has taken me several days and several sites to complete my challenge entry. For the multi-lingual challenge, I decided that since I just purchased a new BoS, what better way to honor my two deities than to write my dedication in their languages. Yes, that is plural on purpose, lol, because, I’m crazy.

The first task was to actually write my dedication so that I had something to translate. This came pretty quickly when I sat down to think about it.

Lord Hades, Master of the Underworld, Honored host of our beloved dead (person), Husband of fair-haired Persephone, I praise you, I honor you, I worship you.

Lady Hel, Dark Goddess, Ruler of the Night, Morbid (death) Queen, ever so serene (with peace), I praise you, I honor you, I worship you.

Please give me the wisdom to fill these pages. Help me learn the things I must learn within this lifetime. Guide me to complete my task of my Book of Shadows so it may be used for my highest good.

I dedicate this book to Lord Hades, Holder of the riches (treasure) of the deep earth.

I dedicate this book to Lady Hel, the Dark Queen.

I dedicate this book to my future self in hopes that I may further my practice and grow spiritually.

Now that I have my dedication, I needed to set about translating it. I searched for translators and English to Ancient Greek or Old Norse Dictionaries. Surprisingly, it was easier to find information for Old Norse than it was for Ancient Greek. I will list my sources at the bottom of my post.

For Hades, I only needed to translate from English to Ancient Greek. There was only a dictionary for this so it was time-consuming as I had to search for each word individually. If the word did not exist in Ancient Greek, then I had to search for synonyms that still held the same meaning to me. This took several hours on one night. Once I had the Ancient Greek, I then went to Google Translate to get the “pronunciation” of the words so that I can attempt to say them correctly when I do my dedication ritual.

The first part of Hades’ dedication is where I am honoring him. The Ancient Greeks called the Underworld Hades so his name is also used for “Underworld.” When I searched for “dead”, I discovered that they have a word for “dead person”, which is how I am using the word in this dedication so I chose to use that word below (nekrós). The way I describe Persephone was not available so I had to use my best judgment in translation. I landed on “blond hair” as the closest thing to “fair-haired.” There is no word for “worship” so I had to see my imagination here. I went with “to get down on one’s knees” for this part of the translation. You will see I used a different word later in the dedication because of the context.

The second part is where I am actually dedicating the book. As mentioned above, there is no “worship”, so I chose to use “consecrate” in this case. There is also no word for “riches” so I used “treasure”. I also used the “earth” that meant the ground and not the planet.

So with Hades’ portion done, I then went to Hel’s portion, which I thought was going to be harder. I quickly found a Rune translator and thought “that was easy.” But during my research, I realized I needed to translate to Old Norse first, then to Runes. Ok, so maybe not so easy. I did another search and found a Viking-age Old Norse dictionary similar to the one I used for the Ancient Greek above. Ok, I know how this goes, lol.

I ran into the same issue with “dedicate” so I used “declare” instead.

Once I had the Old Norse translations, I plugged that into my rune translator and picked the Younger Fathark as this is what the Vikings most likely used based on my research.

So my dedication is now complete. This weekend when I have some time, I will write it into my BoS and do my blessing and dedication ritual. I will update you with the pictures once I have them. Here is to me attempting to write all this in a way that doesn’t look like rubbish.

Editing to add picture of completed dedication in my BoS 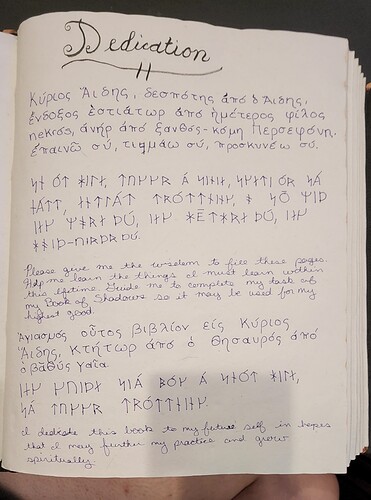 Oh I love you went through this for your official BoS! Great job on them. You did a great job presenting what it is that you did for you entry & I can imagine it will serve you very well for your highest good!

Thank you! I wanted to do something to honor Them with my new official BoS and this challenge was a sign!

I love how much work and dedication you put into this

You’ve given me an idea, too! Also, props to you for spending the time figuring out how to translate your dedication into Ancient Greek

that can’t have been easy!

Just have to reply one word. WOW. Awesome job.

You did such a great job on this! Really knocked it out of the park! And what a beautiful dedication!

@Amaris_Bane this is all such wonderful detail to your learning and the synchronicities with the challenge and your new BoS and how you have weaved so much information into the week are impressive and I have learned from it! Bravo and thank you!!!

One of the benefits (and downside from a $$ viewpoint) of working as a remote consultant is sometimes I have a lot of downtime. This week was a relatively slow week some days so I not only had the evenings but the day as well. Makes it handy when my ADHD hyperfocus kicks in, lol.

write my dedication in their languages. Yes, that is plural on purpose, lol, because, I’m crazy.

Not just one but TWO amazing translations!

Goodness, Amaris, you went above and beyond for this challenge and the results are really impressive. Congrats to you on both your work as well as the beautiful dedications in your BoS- what a great way to begin your sacred Book!

It sounds like you discovered some interesting details about Hades and Hel as you worked on their translations. Do you think doing so helped you connect to them in new or deeper ways?

Really great work and a fantastic entry! Thank you so much for sharing it!

Do you think doing so helped you connect to them in new or deeper ways?

And thank you! As soon as I saw the challenge, I knew I had to do this.

I’m glad it helped you deepen your connections, and it was really amazing to see! Thank you again so much for sharing your work

I’m glad you have joined us!

Wow, that is real dedication! You did a really good job, i dont know about the Old Norse and and the Farthak, but I actually praise you for the Ancient Greek and how far you got with the translation! Ancient Greek can be a pain in the

Thank you! It was tedious but I enjoyed the challenge. The hardest thing was finding alternative words that still held the same meaning to substitute in the dedication.

The Old Norse was similar but the translation dictionary I found was a little better to navigate. To go to Younger Fathark was easy as I found a rune translator.

Writing both of these was a mind bender for me. I haven’t used Greek letters since my science days. I put lines between words in my draft so I could keep them right.