I was inspired this week by the Tactical Magick challenge to talk a bit about Cú Chulainn, Na Morrigna, and the Táin Bó Cúailnge. I think this is a great example of tactical magick from an Irish mythological perspective.

What is the Táin Bó Cúailnge?

The Táin Bó Cúailnge (The Cattle Raid of Cooley), which I am just going to call the Táin from here on out, is a story from the Irish Ulster Cycle of Irish mythology. It tells the story of a war against Ulster by Queen Medb of Connacht and her husband King Ailill. The war is started because Queen Medb wants to steal the bull Donn Cúailnge from Ulster. Because of a curse upon the men of Ulster, Queen Medb and her husband are opposed only by the Irish hero Cú Chulainn. 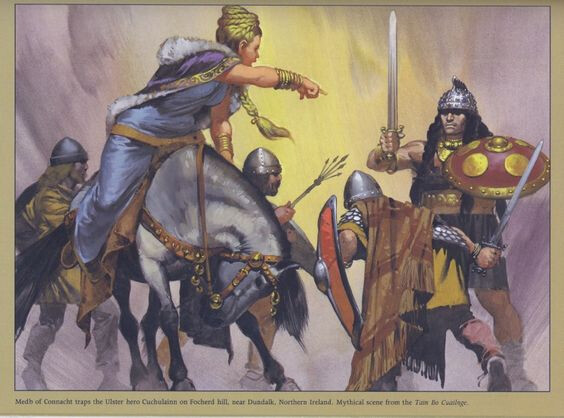 During this battle, many people perform several amazing feats of prowess and magic to aid the battle. That is what I am going to talk about here briefly!

Who is Cú Chulainn?

In Irish mythology, Cú Chulainn’s lineage is a bit complex. I mean, Irish mythology and folklore can be complicated anyway so that is no surprise. So, Cú Chulainn is an Irish warrior hero and demigod in the Ulster Cycle of mythology. He is a warrior hero because of his many feats throughout his life, most of them starting as a small child. He is a demigod because he is the son of Lugh, an Irish god. However, it is also thought that Cú Chulainn is an incarnation of Lugh as well – see, complicated! 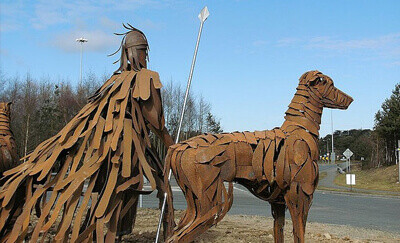 Ogham on the Pillar

One of the first examples of tactical magic in the Táin is when Cú Chulainn created a ring out of an oak sapling with one foot, one hand, and one eye. He then inscribed ogham on the ring and tossed it over the pillar-stone near the river. This ring served the purpose of stopping the oncoming army from crossing the river until someone was able to duplicate Cú Chulainn’s feat.

Cuchulain strode into the wood, and there, with a single blow, he lopped the prime sapling of an oak, root and top, and with only one foot and one hand and one eye he exerted himself; and he made a twig-ring thereof and set an ogamb script on the plug of the ring, and set the ring round the narrow part of the pillar-stone on Ard of Cuillenn. He forced the ring till it reached the thick of the pillar-stone.

The nobles of Erin arrived at the pillar-stone and they there beheld the signs of the browsing of the horses, cropping around the pillar, and they looked close at the rude hoop which the royal hero had left behind about the pillar-stone. Then sat they down to wait till the army should come, the while their musicians played to them. And Ailill took the withy in his hand and placed it in Fergus’ hand, and Fergus read the ogam script graven on the plug of the withy, and made known to the men of Erin what was the meaning of the ogam writing that was on it.

When Medb came, she asked, “Why wait ye here?” “Because of yonder withy we wait,” Fergus made answer; “there is an ogam writing on its binding and this is what it saith: ‘Let no one go past here till a man be found to throw a withy like unto this, using only one hand and made of a single branch, and I except my master Fergus.’ Truly,” Fergus added, “it was Cuchulain threw it, and it was his steeds that grazed this plain.” And he placed the hoop in the hands of the druids, and it is thus he began to recite and he pronounced a lay:—

"What bespeaks this withe to us,
What purports its secret rede?
And what number cast it here,
Was it one man or a host?
"If ye go past here this night,
And bide not one night in camp.
On ye’ll come the tear-flesh Hound;
Yours the blame, if ye it scorn!
“Evil on the host he’ll bring,
If ye go your way past this.
Find, ye druids, find out here,
For what cause this withe was made!”

Magickal feat number one – using Ogham and the magic of the oak tree to stop an army! We know from my Ogham posts that the oak tree is considered sacred in Irish tradition. It has protective qualities and, to this day, is one of my own favorite trees.

Later in the battle, Cú Chulainn encounters The Morrigan in the form of a beautiful young woman. According to Morgan Daimler, there has been some confusion as to the meaning behind this passage. Some claim that this passage shows a romantic relationship between the two. However, that does not make sense to me based on the passage and the previous interactions between the two people. It is more likely, as Daimler suggests, that this passage and The Morrigan’s threats is about testing Cú Chulainn’s dedication to defending Ulster from the oncoming army. 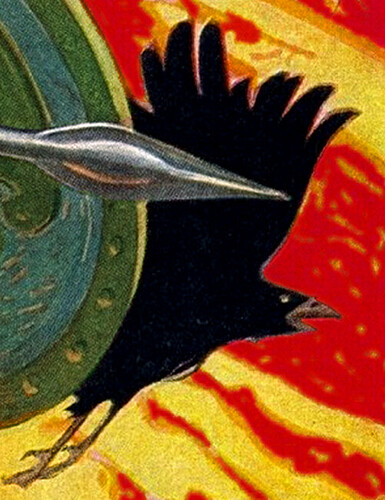 Then Cuchulain saw draw near him a young woman with a dress of every colour about her and her appearance was most surpassing. “Who art thou?” Cuchulain asked. “Daughter of Buan (‘the Eternal’), the king,” she answered. “I am come to thee; I have loved thee for the high tales they tell of thee and have brought my treasures and cattle with me.”

“Not good is the time thou hast come. Is not our condition weakened through hunger? Not easy then would it be for me to foregather with a woman the while I am engaged in this struggle.” “Herein I will come to thy help.” “Not for the love of a womana did I take this in hand.” “This then shall be thy lot,” said she, “when I come against thee what time thou art contending with men: In the shape of an eel I will come beneath thy feet in the ford; so shalt thou fall.”

“More likely that, methinks, than daughter of a king! I will seize thee,” said he, “in the fork of my toes till thy ribs are broken, and thou shalt remain in such sorry plight till there come my sentence of blessing on thee.” “In the shape of a grey she-wolf will I drive the cattle on to the ford against thee.” “I will cast a stone from my sling at thee, so shall it smash 162thine eye in thy head” (said he), “and thou wilt so remain maimed till my sentence of blessing come on thee.”

“I will attack thee,” said she, “in the shape of a hornless red heifer at the head of the cattle, so that they will overwhelm thee on the waters and fords and pools and thou wilt not see me before thee.” “I will,” replied he, “fling a stone at thee that will break thy leg under thee, and thou wilt thus be lamed till my sentence of blessing come on thee.” Therewith she went from him.

This example of tactical magick involves changing shape to subdue your enemy in a manner that would be harmful at that particular time. For example, The Morrigan shifted to an eel in the river when Cú Chulainn was fighting in the water!

Perhaps the most intriguing depiction of shapeshifting in the Táin is Cú Chulainn’s. Before a mighty battle, Cú Chulainn changed shape into a creature of terrifying imagination – at least to me, anyway. I have yet to see this depiction of Cú Chulainn created in any sort of artistic form, though I would imagine it would be terrifying to look at and probably really difficult to depict accurately.

The first warp-spasm seized Cúchulainn, and made him into a monstrous thing, hideous and shapeless, unheard of. His shanks and his joints, every knuckle and angle and organ from head to foot, shook like a tree in the flood or a reed in the stream. His body made a furious twist inside his skin, so that his feet and shins switched to the rear and his heels and calves switched to the front…

On his head the temple-sinews stretched to the nape of his neck, each mighty, immense, measureless knob as big as the head of a month-old child… he sucked one eye so deep into his head that a wild crane couldn’t probe it onto his cheek out of the depths of his skull; the other eye fell out along his cheek. His mouth weirdly distorted: his cheek peeled back from his jaws until the gullet appeared, his lungs and his liver flapped in his mouth and throat, his lower jaw struck the upper a lion-killing blow, and fiery flakes large as a ram’s fleece reached his mouth from his throat… The hair of his head twisted like the tangle of a red thornbush stuck in a gap; if a royal apple tree with all its kingly fruit were shaken above him, scarce an apple would reach the ground but each would be spiked on a bristle of his hair as it stood up on his scalp with rage.

As you can see, there are depictions of magic throughout Irish mythology and these are just a handful in this epic tale of battle over a mighty bull. I could not imagine anything like this taking place today, though the stories make for wonderful metaphors and mythology.

using Ogham and the magic of the oak tree to stop an army!

changing shape to subdue your enemy in a manner that would be harmful at that particular time.

changed shape into a creature of terrifying imagination

This was awesome to read, especially because I don’t know much about Irish legends- I guess I grew up mostly with the Greek legends. This was fascinating to read, thank you so much @MeganB!

I’m glad you liked it!

I find that a lot of people don’t actually know much about Irish myths – most people grow up hearing about Greek and Roman mythology. I think that’s just because it’s more accessible

Hopefully I can bring more Irish mythology to the forum and to my own stuff, I just try to be careful about stepping on the toes of Irish practitioners and being culturally sensitive.

I agree! The Greek/Roman legends were something we covered in school and, looking back, I remember them as being pretty common in the media (at least the media I was watching!). I remember Egyptian mythology to a much lesser extent, followed by a bit of Norse lore- but I can’t remember any references/stories about Irish mythology until I saw the movie Brave (had a very belated 2am epiphany that Brave isn’t Irish at all- it’s Scottish, yikes! I guess that’s case in point right there. And also time to rewatch the movie

And you are always so respectful and eloquent with the wisdom you share- I really love learning about it! Thanks again for this awesome exploration, Megan

I agree! The Greek/Roman legends were something we covered in school and, looking back, I remember them as being pretty common in the media

So true. I think it has to do with the wide ranging influence of Rome, Greece and Egypt through conquest. Another factor would seem to be writing, both the tales told by these cultures and the those told about them by others. Much of Irish mythology is oral history and tradition.

Much of Irish mythology is oral history and tradition.

Even today, Irish culture is very much an oral-based tradition. My friends in Ireland grew up learning these things about their history, mythology, and culture. It wasn’t wide-spread such as with Roman and Greek mythology.